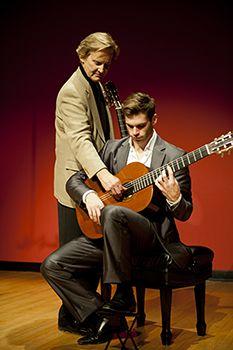 Chair of Classical Guitar Christopher Parkening has a reputation for attention to detail. The standard for Pepperdine’s guitar students is set at “brilliant,” from their relationship with the audience to the way they bow.

“I encourage students to strive for beautiful sounds. The charm of a guitar disappears without them,” Parkening said. “Then we work on the performance aspect of it. We talk about stage presence, the importance of a having a good rapport with the audience, bowing properly. If you don’t know how to do that, it doesn’t come naturally.”

The monthly guitar concerts at Payson — every second Tuesday from 5 to 6 p.m. in the Surfboard Room — are a testament to this standard of excellence, as are the master classes that take place once a semester in Raitt Recital Hall.

“Professor Parkening is so thorough,” said Adjunct Professor of Guitar Anastasios Comanescu. “The students learn so much more here than playing the notes correctly. Working with him is an opportunity to learn from someone who has spent a lifetime honing his craft.”

The physical reminders of his experience are evident. In his office at Pepperdine sit mementos that quietly outline his past and character. Pictures of his wife Theresa and their son, Luke, dominate his desk; two show Luke holding a freshly caught trout with mountains rising behind him.

On the east wall are framed photos of Parkening’s mentor and inspiration, Andres Segovia, and a shot of Parkening playing at the White House for then-president Ronald Reagan.

Against the opposite wall are pieces of sheet music, framed and hung and more photos of Parkening in performance. In a low-rising series of shelves are copies of his numerous recordings — results from his extensive career in classical guitar performance.

Important among these is a small detail — a simple reminder of where he has been, what he has accomplished and what he stands for.

Taped to his music stand at home, Parkening has a note that asks: “Chris, what are you here for?”

“I started guitar at age 11 with the inspiration of a cousin of mine who was a staff guitarist at MGM Studios,” Parkening said. “Four years later, I [studied] with Segovia at his first United States master class.”

Parkening was the youngest student taken on by Segovia at the time and was quickly propelled into his dream position of playing classical guitar at a professional level.

Beginning at age 19, he toured America, Canada, Europe and Asia with Columbia Artist Management in New York, at a rate of over 90 concerts per year.

He collaborated with John Williams, performed in Lincoln Center and Carnegie Hall and played twice at the White House. But Parkening was dissatisfied.

At age 30, disillusioned and “burned-out” with public performance, Parkening retired to Montana to pursue an idealized life of ranching and fly-fishing. Still, Parkening said, within a year, the feeling of dissatisfaction and emptiness returned.

He found his purpose during a winter visit to friends in LA when he heard a sermon by John MacArthur of Grace Community Church titled: “Examine Yourselves Whether You Be in the Faith.”

“I realized I wasn’t a Christian after all,” Parkening said. “I wanted a Savior to save me from hell, but what I did not want was a Lord of my life that I should follow and trust and be obedient to. And you know something? You cannot separate the Saviorhood from the Lordship of Christ.”

Afterward, Parkening devoted his life to Christ, and the note was added to his music stand.

He returned to the classical guitar, and in 2002 he accepted his position as distinguished professor of music and chair of the guitar department at Pepperdine.

Since then, he has worked with students out of his professional knowledge base to promote perpetual attention to excellence and detail.

“He teaches from his own experience,” said sophomore guitar major Roberto Hermosillo. “He asks questions you would never think about, like ‘Do you think the person in the back is going to hear your vibrato?,’ and you add more vibrato.”

According to Parkening, “It is the legacy of learning to play an instrument beautifully that really counts … This motivation for playing music with excellence is what I intend to pass along to the next generation of musicians at Pepperdine.” 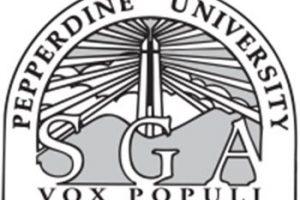