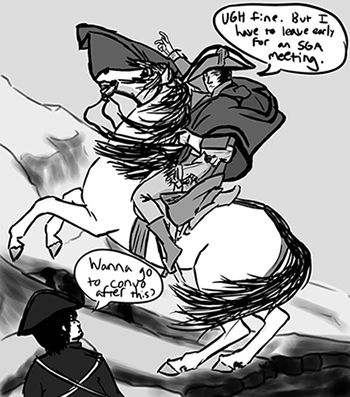 Let’s talk about the other Napoleon syndrome. No, this article is not about short people. Because let’s face it, there are lots of people who are much shorter than the famed emperor and do just fine. Short jokes aside, Napoleon’s height (or lack thereof) wasn’t his downfall. No, Napoleon’s fatal flaw was that he was an overachiever. For all that he succeeded in, he spread himself too thin. He over-committed his time and his resources, and for a lot of Pepperdine students this is a tempting trap.

As a school that pulls from the best and brightest, many of us are used to being involved in sports, student government and various clubs. On the one hand, this is part of what makes Pepperdine the kind of school that it is. Students’ desire to get involved is the basis for the sense of opportunity and community that has become such an integral part of our school. However, the tendency to want to get involved in everything can quickly snowball into being over-involved and over-committed, leaving a full-time student with no free time. Obviously, everyone’s individual situation is different, but there seem to be a few trends.

Freshmen come in and find an immense selection of options from clubs, campus ministries, student government, Greek life, volunteer programs and the like. Eager to get involved and integrated into college life, they often overestimate how many organizations to which they can realistically commit, not to mention the fact that it takes most freshmen some time to really understand the time commitment that comes with college academics. Add that to the many who still apply for jobs on campus and it can easily become a disaster of a schedule.

But this isn’t limited to freshmen. For the sophomores who stay in Malibu, some experience an urge to get involved because they’re not abroad. While Pepperdine does a fantastic job creating opportunities for sophomores who aren’t part of international programs, it can still feel like there’s a need to be actively involved in new ways, and that can lead to over-commitment.

Then there are the juniors, who are usually returning from studying abroad or welcoming home friends who are. These students often strive to get involved because they want to get plugged in where they were previously missing out or missing their friends.

And finally, there are seniors. While many seniors have a good handle on what they can realistically deal with as far as time commitments, there’s always that urge to try new things because it’s their last year — their last chance. There’s that desire to branch out and find new opportunities, as well as maybe take hold of some of the ones we passed up earlier along the way.

This desire is in all of us, and it’s especially apparent in those of us who are always striving to achieve something greater. Granted, most of us aren’t really seeking to conquer the world like Napoleon, but we’d certainly like to feel like we’re on top of the world. And with so many people saying that college is the best time of your life, it’s hard not to feel a need to take every opportunity. We’re all a little prone to over-expending ourselves, but each of us also has the opportunity to find our niche. Life is about going all in, but it’s only worth it when we can really give our all for what we do. The great thing about Pepperdine is that whatever we’re into, whatever our passions, there are ways to live it out — we just have to remember to respect our time. 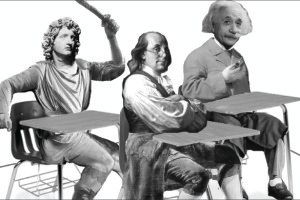 Art by Gary Wright In the past, our label screamed misfits, tricksters, the “unclean,” satanic, inept. Even in the present...
Copyright 2013 Jupiter Premium Magazine Theme
Back to top