Out-of-State Students Search for a Connection With Peers 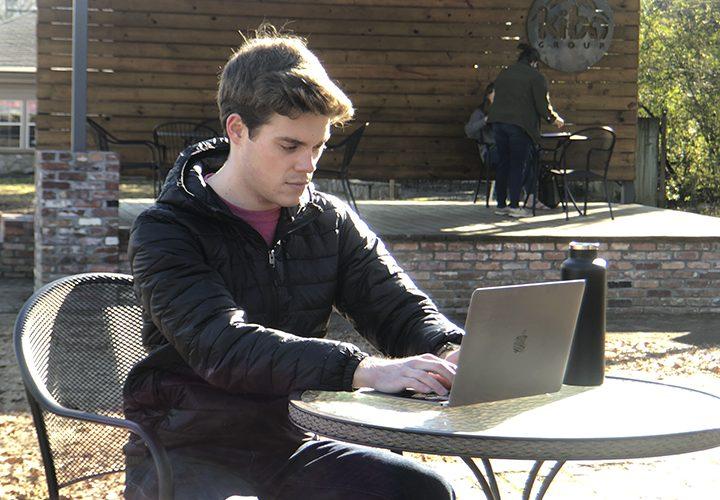 Junior Blake Farley studies outside a coffee shop in his hometown of Searcy, Ark., with a local friend Jan. 22. Farley said he has made an effort to connect with local friends while at home. Photo courtesy of Blake Farley

College life surrounds junior Religion major Blake Farley, who lives in Searcy, Ark. Searcy is home to not just Farley and his family, but also Harding University and Arkansas State University-Searcy, which are holding in-person classes for the spring semester. While college-age people encircle Farley, Pepperdine’s Malibu campus is over 1,700 miles away.

Farley said he maintains his connection to Pepperdine through video calls with students he studied abroad with and in-person interaction with two Pepperdine students who live close to him.

“I felt a really strong connection to Pepperdine through those people that continued to be available digitally, but that’s also lessened a little bit, because you don’t have regular access to everybody,” Farley said. “At best you see their face on your computer screen or phone and not in person and you’re not doing anything.”

According to Pepperdine’s 2020 Fall Enrollment Census, 29.2% of domestic students reside out of state, and 9.7% of all students enrolled reside internationally. Out-of-state students said they struggle with connecting to the Malibu campus, with more than just distance separating them from their peers.

Student Looks for Connection in a College Town

Farley said he is lucky the public health in Searcy is better than that in California, allowing him limited interaction with friends from Pepperdine, friends who go to universities in the area and his church community.

“I do a lot of local connection and really try and find ways to get involved with people who have been a part of my life at home, and especially with the Pepperdine community I try and call regularly,” Farley said. “I tried to find and make the time to catch up with people over the phone or over Zoom. And that does a lot of good, but of course, you can imagine it’s still different.”

There is also a contrast between the way he and his friends, who are attending class in person, are experiencing college. Farley said it is hard to identify with friends who are interacting with their universities in a conventional way.

“I can’t really relate to them in that way, or I can’t totally communicate some of the hardships that have come with that or some of the grief that has come with that experience,” Farley said. “That definitely makes it different, and different than living with classmates this semester, or living near Pepperdine or in California.”

After being notified in November of the suspension of the spring 2021 Washington, D.C., program, Farley found a virtual internship. He will remain remote for the rest of the semester, regardless of whether or not the Malibu campus reopens, Farley said.

“I’m really hopeful that even spread out and at a distance from the community, and with other classmates that are feeling much the same way, that we can just continue to look for the opportunities that are in our respective locations right now, and opportunities that can provide a lot of interesting and really rich experiences that we will bring back to Malibu, hopefully this summer or hopefully this fall,” Farley said.

Student Struggles With the Absence of Peers

Lauren Watson, a junior Screen Arts major and Multimedia Design minor who lives in Jackson, Miss., said her friends from home left for college and no Pepperdine students live in her area.

“Connection wise, it’s really just me and my mom and dad here, so I really rely on them a lot, but, they’re tired of it,” Watson said. “They want to do their own thing and I’m like, ‘can we please do something, I’m so bored.'”

Watson said she is able to connect with the Pepperdine community through her Communication Graphics class, which she is taking over the January session, and texting her friends.

“I usually talk to my teacher after class anyway just because I need that extra time,” Watson said. “And it’s probably the closest I’ve ever been to a professor.”

Watson plans to move in with her sisters who reside in Oxford, Miss., for the beginning of the spring 2021 semester. This will allow her to interact with people closer to her age who have similar experiences, Watson said.

Christopher Ganey, a first-year pre-Business Administration major who lives in Ashburn, Va., said the closest person from Pepperdine he knows is in Chicago, Ill.

Ganey is involved with a church group as a part of Calvary Chapel in Malibu.

“That church group is the only connection I have to California,” Ganey said.

Though most of his hometown peers have returned to college, Ganey said he also spends time with a friend who is attending community college in the area.

“I’m really close to my family so I spent a lot of time with them and hoping to visit some of my friends here on the East Coast, do some road trips and visit their colleges,” Ganey said.

During the fall semester, Ganey said he was able to find a way to adjust to the time difference.

Halle Bowe, a sophomore Integrated Marketing Communications major with a minor in Journalism, is living in Nassau, Bahamas. Nassau has a three–hour time difference from Malibu, which Bowe said presents challenges such as staying up late for classes and club meetings.

“With club meetings at first it was a bit hard because for certain organizations I am a part of I’m the only student in this time zone, so they would all like to prefer to meet at one specific time and then it puts a strain on me,” Bowe said.

Additionally, Bowe said the time difference made group projects challenging because it was hard to find a time to connect with all the members of her group, especially with international students whose time zones conflict with Bowe’s.

Even though there are few students who are in the same time zone, Bowe said there are no other students from Pepperdine in her area. It is a challenge to connect with people her age because in Nassau there is a curfew imposed due to COVID-19 and restaurants and activities intended for young adult audiences closed in March.

“I can say that due to the lack of things there is to do here I’m able to focus more of my time on more productive endeavors,” Bowe said. “But I feel such a disconnect to the point where I’m planning to move back to the Malibu area in a few weeks because I simply just can’t stay here anymore.”

Bowe is a part of NewsWaves, Student Government Association and the Black Student Association, and she said the organizations’ meetings help her feel connected to the Malibu community.

However, Bowe said she feels separated from other students because of social media and her view of their dissimilar lives.

“I know a lot of students have been residing in Malibu since last semester,” Bowe said. “And I felt that disconnect because I’m in a whole different time zone and all of the activities I see my peers doing, who are in the Malibu area, I’m unable to do because the restrictions here prevent me from doing so.”

On Jan. 8, Dean Micheal Feltner wrote in an email to the Pepperdine Community that the spring 2021 semester would start with online instruction and that Pepperdine will announce any plans to reopen the Malibu campus Feb. 8. 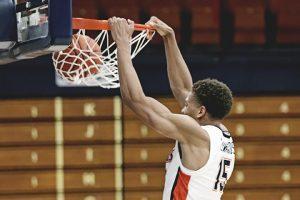 Junior forward Kessler Edwards grips the rim after a second-half dunk versus the University of the Pacific on Jan. 21 in Firestone...
Copyright 2013 Jupiter Premium Magazine Theme
Back to top