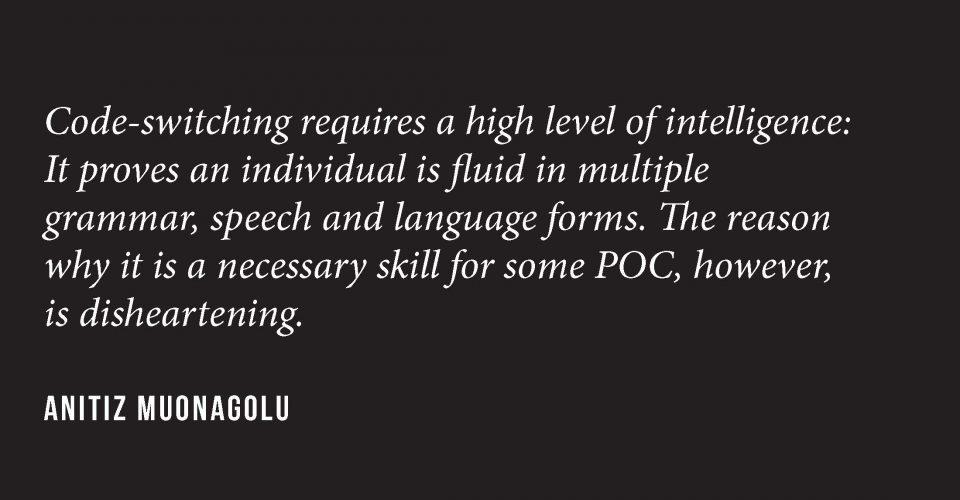 For those who are not a part of the white majority, interacting in America takes a bit more work. This is reflected by everyday conversations in which POC employ the skill known as code-switching.

Code-switching is generally defined as the practice of switching from school-taught English and grammar rules to other types of English dialects such as African American Vernacular English. It can also be used between languages; speaking English around one group of individuals, then speaking Spanish around another is a common example in the U.S.

Code-switching can be a valuable skill for interacting with the majority, however, it can enforce the idea that people’s own identities of communication shouldn’t be normalized within society.

A group of Black scholars coined the term AAVE, also known as Ebonics and originally called Nonstandard Negro English, in the 1970s. Scholars, however, heavily debate its origins.

The most well-known hypothesis states that AAVE began during the slave trade. People who were enslaved had to learn English the best they could despite it not being their native tongue. By mixing English with their own West African and Creole speech, they shaped their own form of English.

Ebonics also includes the dropping of certain letters, linking verbs and words in phrases. For example, “I don’t know” becomes “I oun know,” while “I’m gonna do it” becomes “I’mma do it.” There are also words that were created in AAVE such as “ain’t,” “phat” and “ashy.” Another key instance is the usage of the double negative — “I don’t want none,” for instance — which some think is to exaggerate the point of the singular negative.

Unfortunately, some equate the usage of AAVE to a lack of knowledge. This bias is known as “linguistic prejudice.” As a result of the stigmatization of AAVE — and subsequently, the accent along with it — many POC who grow up in America learn to speak in a specific tone while using standard English. Colloquially, this is known as their “white voice,” and it involves speaking standard English while using elevated diction and syntax.

Code-switching also adds a layer of division within POC communities. In an effort to succeed in a white man’s world, some assimilate, causing others in their communities to brand them as a “sell-out” or an “Uncle Tom.”

Inherent prejudice between languages causes unnecessary pressure for POC, which results in them code-switching. For instance, English-speaking individuals often resort to harassment when others speak Spanish or Arabic in public; President Donald Trump is guilty of this. He famously said, “We speak English, not Spanish,” during a CNN Presidential Debate in 2016.

First off, the United States has no official language. This is most likely due to the multitude of languages that thrive in the U.S. such as Spanish, Chinese, Tagalog, French, Vietnamese and Korean.

English also has many phrases and words that are appropriated from other languages. “Déjà vu” or “rendezvous,” for example, are both French in origin, while “embargo,” “mosquito” and “breeze” all have direct Spanish roots.

Code-switching requires a high level of intelligence: It proves an individual is fluid in multiple grammar, speech and language forms. The reason why it is a necessary skill for some POC, however, is disheartening.

POC are hindered from using their natural speech patterns, while the majority can appropriate them whenever they see fit.

Individuals, schools and the nation need to be aware of how they perceive other languages and dialects and the people who speak them. Since we know America is full of different individuals, it’s time to accept the notion that it’s also full of different, valid and beautiful forms of speech.

Staff Editorial: Positivity Is Key Through Tough Times In An Online Semester 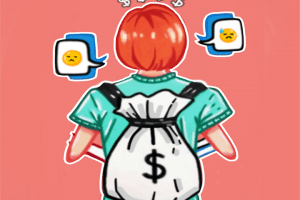 Staff Editorial: Positivity Is Key Through Tough Times In An Online Semester

Art by Leah Bae In the days between Pepperdine's May 20 announcement of plans for an in-person semester and its July...
Copyright 2013 Jupiter Premium Magazine Theme
Back to top