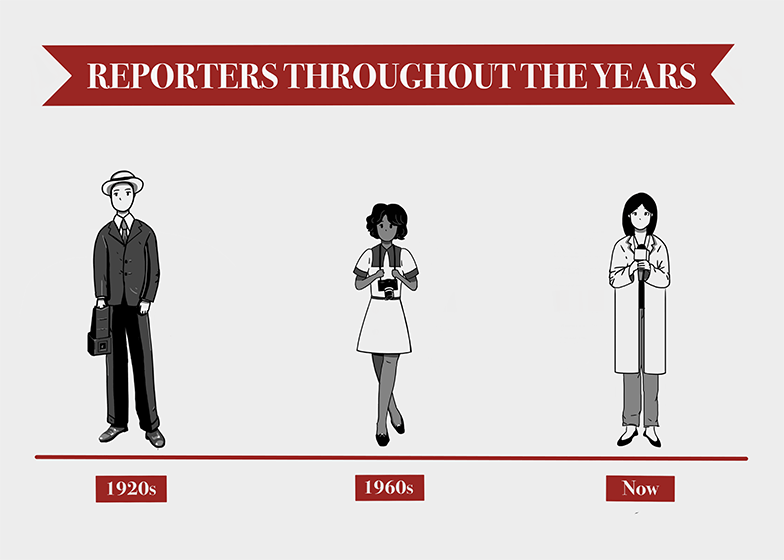 From the emergence of jazz journalism in the 1920s to contemporary reporting, the media continuously helped shape the world by reporting news and stories from around the globe. The past 100 years remain crucial to understanding the world of news, and the sole unchanging factor throughout the history of journalism is the critical role reporters play in keeping people informed.

Each decade is essentially marked by ingenuity, tragedy and scandal in the media sector as unprecedented national and global events presented many opportunities for journalists and the press to report urgent and significant news.

Although the techniques of a reporter have changed drastically over the years, two unchanging features of journalism are the level of commitment reporters show and the impact reporters have on societal advancement. Without their hard work, many important pieces of American history would have never been revealed to the public. This information led and will continue leading to socio-cultural movements, accountability and ultimately much-needed reforms within American society.

Journalism in the early 1900s was dynamic as it expanded and evolved nationwide. Although press reporting technology remained limited, reporters stayed committed to delivering any incidents and extraordinary stories that were happening around them.

The 1920s to the present day highlights this commitment, as well as the gradual changes within the role of a reporter.

Journalism in the 1920s is often referred to as “jazz journalism” because news stories during this era were provocative, glamorous and adventurous. Reporting in this decade generally reflected the rebellious and free-spirited energy of the Jazz Age.

Media coverage concentrated on crime, sex, celebrity affairs and social scandals, as people yearned for gossip and entertainment — a dramatic change from the previous somberness that characterized most news stories from World War I.

Reporting primarily focused on allowing readers to catch a quick glimpse of the glamor and grandeur of the 1920s since the majority of people could not attain these luxuries in real life.

Similar to contemporary reporting, jazz journalists occasionally overstepped the boundaries of today’s journalism ethics to sell the most papers. The most lurid sensationalism was based in New York. In 1928, Daily News photographer Tom Howard secretly photographed Ruth Snyder as she was electrocuted at an execution chamber after being convicted of murdering her husband.

Many newspapers began to take on a more modest and thoughtful tone after being criticized for disrespecting human morality and privacy. As the Great Depression began to promptly mark an end to the Roaring Twenties, sensationalism quickly died down — marking the end of jazz journalism, according to the History of American Journalism.

Reporting in the 1930s and ’40s took a sharp turn from the daring and mischievous tone of jazz journalism when many publishers struggled to keep their newspapers afloat during the Great Depression.

The majority of journalists proceeded to make the shift from an excessively scandalous to a more conservative and management viewpoint by prioritizing labor news coverage.

As the public began to scrutinize the press for downplaying the effects of the Depression, many newspapers sought to divide themselves from the hardships of the 1930s and ’40s and minimized their presence until the Depression passed.

Consequently, print journalism became less prominent as radio journalism turned into the dominant form of entertainment and news because it catered to a single audience, regardless of race and social status. Radio programs also gained massive popularity since they would entertain, inform and help distract the audience during the hard years of the Depression.

The popularity of the radio further grew when President Franklin D. Roosevelt started his “fireside chats” in 1933, elaborating on his actions and reassuring citizens over the broken economy. Many journalists and commentators even utilized the radio to help Americans understand the new policies Roosevelt implemented.

One of the most famous commentators to emerge during the 1930s was Hans von Kaltenborn. He appealed to larger audiences with his perfectly pitched voice and never-ending talent for ad-lib — the ability to speak or perform in front of an audience without rehearsing or preparing one’s words. Another popular commentator was Walter Winchell, who strongly supported Roosevelt while educating Americans on Germany’s actions.

During the 1930s and ’40s, women also began to take a more prominent role in the field of journalism. Although newsrooms generally banned women from reporting on politics and economics, First Lady Eleanor Roosevelt encouraged the inclusion of female reporters throughout newspaper services by hosting press conferences exclusively for women.

With the beginning of World War II, women occupied at least half of the staff positions in newspapers since many men left their jobs as reporters or commentators to serve in the military. Although most newswomen covered local stories, some female reporters such as Tania Long, Betty Wason and Martha Gellhorn became foreign war correspondents.

As television began to dominate households during the 1950s, radio and print journalism transformed to include a mix of music, news, sports and weather to keep up with the new competition.

As the decade witnessed the growth of the Civil Rights Movement, the Chicano Movement and various art movements, the world of journalism started to reflect this progress through the mass coverage of the Little Rock Central High School integration as well as the emergence of the magazine Playboy.

Both society and journalism in the 1950s began to push the boundaries on numerous topics such as race and sex. This essentially allowed journalists to easily adopt the counterculture movement that encouraged them to report on and scrutinize the government during the following decades.

Moving forward to the 1960s and ’70s, a term called “new journalism” came to describe much of the work reporters Tom Wolfe, Truman Capote and Gay Talese were doing at the time. New journalism combined narrative creative writing styles with the skills of investigative journalism and began this shift. It necessitated more thorough reporting skills to truly tell a non-fiction story. This could be considered similar to some of the work the Perspectives team does on the Graphic.

In light of a rapidly changing socio-political climate, this shift allowed reporters to adapt to the stories of the time. Civil rights protests, wars, unrest, assassinations of many prominent political leaders and the counterculture movement were all prominent events of the era, requiring intensive investigative reporting skills in an easily digestible format. Nightly news anchors such as Walter Cronkite became household names and faces as families gathered in front of their TVs or radios.

In the midst of this important shift, reporters received more negative scrutiny than ever, especially from the Nixon administration. However, this didn’t stop reporters from breaking one of the largest scandals of the era — Watergate. The New York Times, The Washington Post and the Pentagon Papers contributed to exposing one of the largest presidential scandals in American history. Without the hard work and investigative skills of reporters, this wouldn’t have been exposed. A huge strength of this form of reporting is its ability to dive into the heart of an issue — and captivate the American people in the meantime.

The 1980s and 1990s introduced cable news conglomerates, such as CNN and Fox News, which offered the promise of 24/7 news coverage, requiring reporters to always be on-call. It then became imperative that reporters had consistent availability to cover breaking news, whenever it occurred. Worldwide audiences were interconnected in ways like never before, which in some ways increased the pressure and responsibility within the reporting role. This created a weakness — reporters were forced to be even more careful and accurate within their research because misinformation spread more rapidly than ever before.

This era also contributed to the rise of daytime talk shows becoming a form of reporting. Oprah Winfrey ran her talk show, “The Oprah Winfrey Show,” which combined a casual, informal discussion-style of reporting with many highly investigated pieces. This style is seen in a variety of other shows from the period, including the show “Barbara Walters Specials.” Journalist Barbara Walters interviewed various influential figures, revealing insightful stories. This opened the door for present-day reporters having shows completely dedicated to entertainment and lifestyle reporting, such as “The Wendy Williams Show” and “The Real.”

Since the 2000s, access to the internet has been easier than ever before due to phones, computers or other electronic devices. Therefore, digital media provides reporters with new platforms and resources to create better stories.

Journalism Professor Christina Littlefield was a reporter for the Las Vegas Sun from 2003 to 2007. She said the internet played an important role during her work as a reporter.

“Reporting is so much easier now,” she said, laughing. “Reporting is more exciting today. Before, there were so many limits on what I could do visually for my stories when they were just going into print.”

But with more opportunities comes more challenges. Reporters have to be cautious when investigating through the internet.

“You do have to be careful you’re getting good information — I think there’s a digital literacy that journalists have had to learn,” Littlefield said.

But more than ever, reporters are essential for capturing the stories that makeup America — the good and the bad. To do this, many risk their own health and safety — especially reporters in the field during a global pandemic.

“The other thing I want to stress about reporting is it is so essential to our democracy,” Littlefield said. “They go to the meetings the rest of us don’t have time to go to, they make sure the government does what it says it’ll do and they watch taxpayer money.”

Our democracy is extremely fragile, and journalists hold the important role of protecting it by holding politicians accountable.

Many of the striking events from the past year — from protests to the pandemic to an insurrection — would not have been covered without the bravery, heart and resilience of reporters.

From the 1920s to now — even as the world changes — the need for reporters dedicated to displaying the truth for all to see will remain.