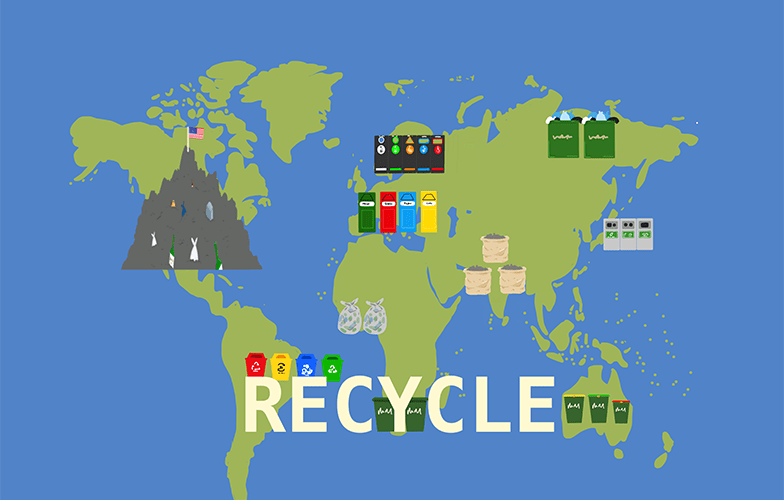 In the United States, the average person produces about 4.4 pounds of trash every single day, according to the Environmental Protection Agency. Although some Americans may respectfully sort and place trash into recycling bins, unfortunately, most waste that should be recycled ends up in the trash.

The United States desperately needs to reform its recycling system, as it was ranked as the world’s third most wasteful country in 2019, according to Statista. At most, only about 66% of discarded paper and cardboard is recycled, and less than 10% of plastic is salvaged, according to the Earth Institute.

Many Americans blamed China for this predicament since the country decided to close its market for foreign waste management in 2018. The decision shocked the world as China made a large amount of money processing and selling the raw materials that resulted from its booming recycling business. China’s decision essentially brought an overly delayed day of reckoning to the United States.

Due to lack of preparation, many recycling companies scrambled to search for new buyers from developing nations to substitute for China’s waste management market. Others ultimately resorted to burning large amounts of low-quality recyclable materials in incinerators or dumping them into large landfills as they are monetarily cheaper. Unfortunately, many of these landfills continue to grow quickly in populated states, like California and Nevada.

Landfills are not only blemishes to the land, but they also create many negative effects. They are environmentally dangerous as the materials in a landfill can release methane gas. Landfills also impact future biodiversity as well as the physical health of the residents that live near them, according to Sciencing. The negative impacts landfills cause are gradually becoming uncontainable.

Without China’s market, the recycling industry in the United States remains stagnant as many recycling companies hope some kind of domestic market will return. Consequently, some cities in certain states, such as Sacramento, Calif., stopped accepting mixed plastics, while others, like Surprise, Ariz., ended curbside recycling altogether.

Although there is a clear need for major investment in infrastructure, upgraded establishments are not worth anything if Americans don’t improve their recycling habits.

Americans essentially need to relearn what they were supposed to know many years ago — self-educate, compost what can be composted and properly sort out recyclable materials.

Unfortunately, many Americans are lazy when it comes to properly sorting out recyclables as one in four items thrown into a recycling bin are not recyclable, according to an article from Mic. Not only is this partly out of ignorance, but it is also due to the past convenience the United States possessed as the country heavily relied on China to make proper distinctions regarding recyclable materials.

The United States desperately needs a unified system and domestic market for clean, sorted recyclables. If possible, rinsing out any recyclable food containers, cans and bottles before placing them in a recycling bin would greatly reduce the chances of contamination.

To further avoid contaminating recyclable materials with non-recyclable items, the United States needs a more diverse range of bins, similar to the system in Germany.

The majority of states in the United States simply offer their residents one single blue bin to put all their recyclable materials in. However, many items become contaminated when they are accidentally contaminated by discarded food.

To fix this, the country needs a wider array of bins for each particular recyclable material with standardized messaging, such as “glass only” or “paper.”

Additionally, it would be beneficial for the United States to divide waste management responsibilities between the federal and provincial governments — which is comparable to the environmental practice in Austria — to establish cooperation between municipal and private waste management. With a regulatory framework alongside the implementation of economic incentives, Austria remains the greenest among all European nations.

For example, the United States can hold a campaign specific to composting as 72% of Americans do not compost due to inconvenience or lack of knowledge, according to Planet Forward. By composting, the average person can reduce their average amount of waste from 25 to 50%.

Although new innovations and machines have been developed to mechanically separate different recyclable materials, the United States remains fixated on the option to dump everything into a landfill. The country demands greater investment by private industries as well as the national government.

At the individual level, people must learn about both national and local recycling protocols and get in the habit of putting trash in the correct bin. It is up to these individuals to stave off contamination to ensure that as many recyclables make it to recycling companies. These are small but impactful steps toward what is hopefully the start of a less wasteful recycling system.

Petty Perspective: There is No Room for Mushrooms

Opinion: Unlink from the Toxic Side of LinkedIn 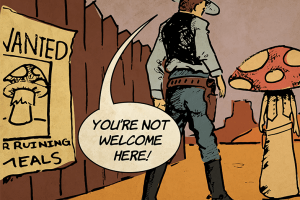 Petty Perspective: There is No Room for Mushrooms

Art by Samantha MillerImagine this: You are sitting down at a restaurant, excited to eat dinner. Your waiter puts a delicious...
Copyright 2013 Jupiter Premium Magazine Theme
Back to top