However, with President Joe Biden now in office, international students may be able to remain in the United States for much longer after graduation, which means there would be more opportunities for them.

In fall 2020, there were 918 international students enrolled across all five schools at Pepperdine University, according to the factbook by the University’s Office of Institutional Effectiveness. Many of these students chose Pepperdine for its academic prestige, which becomes a huge asset when searching for jobs post-graduation. In return, international students bring global perspectives and cultures that contribute to intercultural diversity on campus.

On a national level, the impact of international students on the United States’ economy exceeded $40 billion in 2019 — creating and/or supporting nearly 460,000 jobs, according to EducationData.org.

The financial impact is no different at Pepperdine. Pepperdine offers limited financial aid for international students. In addition, a small number of non-U.S. citizens qualify for federal and state financial aid, according to Federal Student Aid of the U.S. Department of Education. As a result, they contribute to Pepperdine’s economy greatly in the form of tuition.

Furthermore, the Department of Labor and Homeland Security also announced an overhaul of the H-1B visa program Oct. 6. This interim final rule requires companies to pay H-1B workers significantly higher wages, but on the other hand, the government rejects approximately one-third of H-1B visa applications. This new rule stood as a wall for international students because the level of uncertainty that applicants and potential employers experienced while filling out H-1B applications heightened.

Contrastingly, throughout the election period, Biden’s campaign focused heavily on diversity and inclusion efforts to welcome more immigrants into the country. To diversify the nation, one of his promises was to reverse the harsh immigration policies that the Trump administration previously implemented. On his first day of presidency, Biden and his team issued several immigration-related executive orders such as terminating the construction of controversial U.S.-Mexico boarder walls and reinstating the Deferred Action for the Childhood Arrivals program.

Although the Biden administration has not stated how they plan to approach the student visa restrictions, per his tweet July 7, international students can expect to see less restrictive visa issuance under the new government. 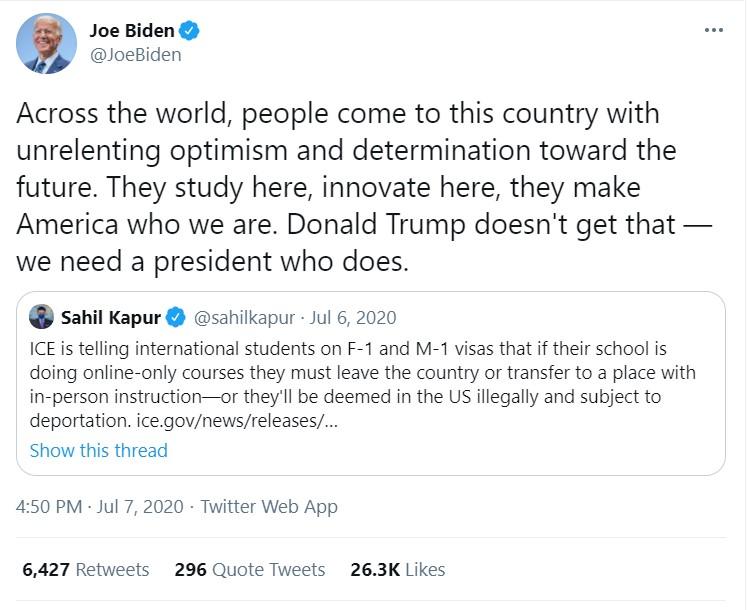 So, what exactly can international students expect from the pro-immigrant president? Biden stated in his campaign page that “foreign graduates of a U.S. doctoral program should be given a green card with their degree.” This indicates that there will be an increase in the number of visas offered for permanent work-based immigrants.

As for undergraduate students, they would no longer be at risk of getting their Optional Practical Training denied. OPT is a popular work program for international students that allows them to live and be employed temporarily for an additional year — three years for STEM majors — after completing their studies in the United States.

For the past four years, students have unnecessarily given up their dreams of studying in the United States. Despite the ongoing pandemic, it is predicted that there will be more international students coming to the United States in the near future, especially from Arab and Muslim countries. With Biden’s plan to grant visas for many non-U.S. citizens, there is finally hope among those who dream of pursuing a career in the land of the free.