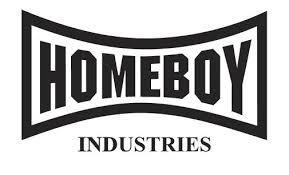 A crew of Pepperdine freshmen visited the site of Homeboy Bakery on Aug. 23, one of several projects under the Homeboy Industries banner, for an New Student Orientation excursion.

Salvador Sanchez Strawbridge is the social media coordinator and staff photographer for Homeboy Industries, a nonprofit organization in the heart of Los Angeles. Founded in 1988 by “Father” Greg Boyle, Homeboy Industries offers a second chance at an education and a career to those formerly involved in gangs or incarcerated.

“I gang-banged for 10 years, but now I’m a double-master’s student from USC going to UCLA for my Ph.D,” Strawbridge said. “So you know, this place works.”

The company offers free parenting and educational classes to the public (taught by certified teachers), primarily encouraging participants to graduate high school with a GED certificate.

“We get paid to go to court and take our children to the hospital because we are doing something to better ourselves,” employee David Valenzuela said. “With records likes us, nobody would hire you to get a job. It takes about a month to get a job here because they want to see that you are committed.”

Employees are required to take a drug test and meet with case managers on a monthly basis. They are also encouraged to get tattoos removed.

“It’s free of charge and open to the public,” Valenzuela said of the tattoo removal service. “We have about 30 doctors — 29 are volunteers.”

“I got it at 14,” Avalos said,  revealing a faded tattoo on the back of his head. “[Getting it removed] felt like a third-degree burn.”

This experience has helped Avalos advocate against tattoos.

“We try to encourage everybody with tattoos to get them off because it prevents them from getting a job and can also get them killed,” Valenzuela said.

Valenzuela, a former gang member himself, led the students outside to share his testimony before touring the company.

“I was a knucklehead,” Valenzuela said. “I started getting high at a young age and went to rehab when I was 12. My mom finally found people to handle the situation. They came to my house, handcuffed me, and the next thing I know I’m in France … I got molested because I was so young. I woke up every day as a slave. I became a man the hard way.”

Instead of going to a rehabilitation center as promised, Valenzuela was forced to do manual labor at a concentration camp for 10 years.

“When I came back, I didn’t know what to do,” he said. “So I went back to my neighborhood, did drugs and got high. I hooked up with a girl for a month and got her pregnant. I verbally abused her, and I didn’t treat her the way I should have. She put up with me for 10 years before she left and married somebody else. When she did that, I went through this deep depression. I was asking myself, ‘Why can’t I get a job or go to school?’

“That’s when I texted Father Greg [Boyle]. He saw my frustration. I said I needed help and that if he would just give me an opportunity, I would make him proud. And I think I have.”

Since the organization is not government-subsidized, Boyle speaks extensively to raise funds for the mission. Additionally, Homeboy Industries brings in money through donations, a merchandise room and their on-site businesses, Homeboy Bakery and Homegirl Cafe.

“Our profits basically cover 30 percent of our annual budget, which is about $12 million,” Valenzuela said. “We are paying people that other people do not want to pay in order for them to better themselves.”

After a tour of the company, students bought baked goods from Homegirl Cafe and boarded the bus back to Malibu.

“I was inspired to really come out of what I’m comfortable with,” freshman Emily Shin said. “I felt like [Boyle] had a vision, and I guess I’m inspired to pursue my passion without boundaries. I learned that gang members aren’t just gang members because they are bored, but [they are] just created out of their brokenness. I didn’t know that, and before I think I was quick to judge.”

Virgo Write that strongly worded letter you’ve been meaning to write. You will be surprised by how far it actually goes. Scorpio It’s...
Copyright 2013 Jupiter Premium Magazine Theme
Back to top