In a Mountain Pacific Sports Federation (MPSF) matchup, the No. 10 Pepperdine Men’s Volleyball team toppled No. 2 UCLA in sweeping fashion Friday, Feb. 23. The Waves beat the Bruins 3-0, notching 25-21, 25-23, and 25-20 set scores to secure their fifth consecutive win and improved their conference record to 3-1 and 9-3 overall. 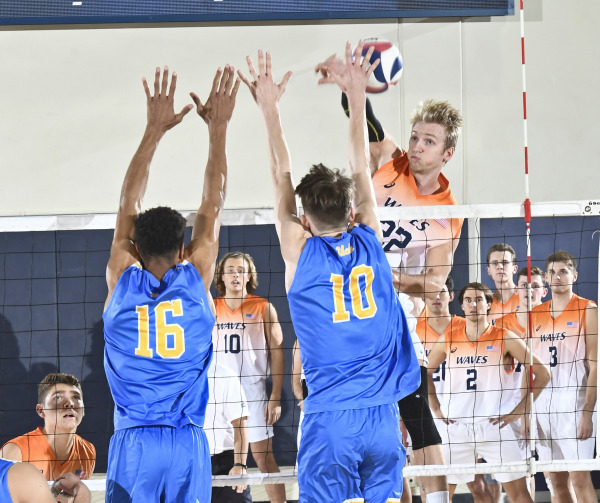 Heading into the match, the Waves were determined to concentrate on their attack to maintain an advantage over the Bruins.

“Other than being able to react to what they are going to show us, the strategy was as always to focus on our side of the net and be good in what we can control and what we have been working on in practice on a daily basis,” Harthaller said.

The defensive strategy was just as important senior outside hitter Colby Harriman said.

“We wanted to be good on their hitters’ tips and off-speed shots,” Harriman said.

The first set was a back-and-forth battle with both teams fueling powerful attacks. The Bruins pulled away 10-13 after several service errors from Pepperdine, but Harthaller and Wieczorek delivered three massive kills to tie the game up again 13-13. A defensive feat from Harthaller and junior middle blocker Max Chamberlain helped the Waves break away from UCLA to take the lead 20-17. Chamberlain and Wieczorek notched two more kills before a block by junior outside hitter Michael Wexter and Wieczorek sealed the 25-21 win for the Waves. 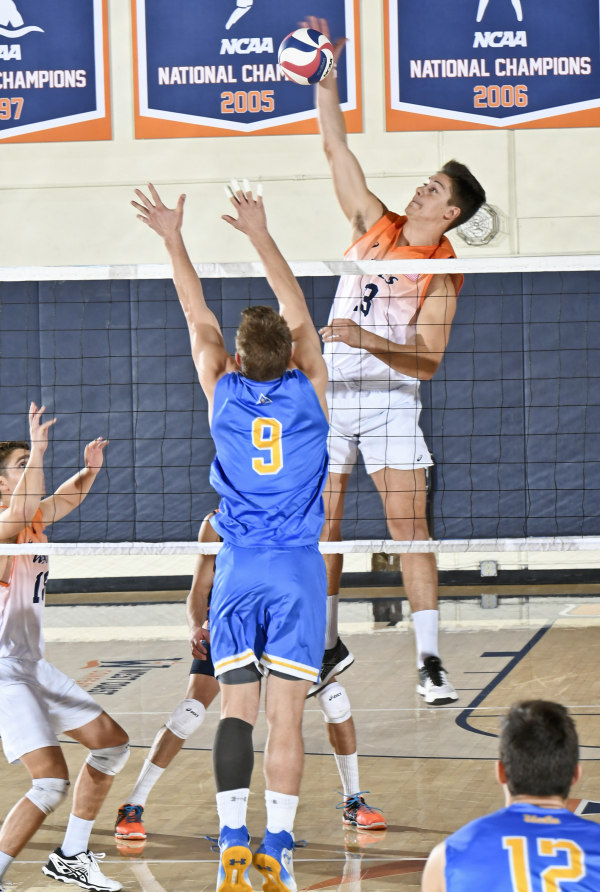 Pepperdine came out swinging in the second set. Two kills and an ace from Wieczorek and two smashes from Harriman and Harthaller put the Waves ahead 6-1 to kick off the set. The Bruins were able to find their way back and tied the game at 10. The two teams exchanged attacks with one another until they reached another tie 18-18. UCLA nailed two aces to put them ahead, but a Pepperdine timeout helped the Waves regroup. Wieczorek drilled his third ace of the evening in addition to two more kills to put Pepperdine in the lead 22-21. Again, Wexter sealed the deal with a major smash to secure the 25-23 victory for the Waves.

In the third set Pepperdine dominated, maintaining the lead for the entirety. The Waves posted their highest numbers in the third set, totaling 17 kills from Wieczorek, Harthaller, Wexter, and Harriman combined. A kill from Harthaller off an assist from redshirt freshman Robert Mullahey gave the Waves the 25-20 win.

#Hunted .. The #10 Waves get another #UPSET tonight as they #Sweep #2 UCLA at home! #Check these highlights out! pic.twitter.com/nREy4y3TL2

#Hunted .. The #10 Waves get another #UPSET tonight as they #Sweep #2 UCLA at home! #Check these highlights out! pic.twitter.com/nREy4y3TL2

“It was awesome to win against UCLA,” Mullahey said. “We executed everything we needed to, we gave it 100 percent and it paid off. It was a really great team effort and I think this win will give us some great confidence heading into our games on the road next week.”

“Sweeping UCLA was amazing,” Harriman said. “As great as it feels, we can’t look back, only forward. Our next match is the most important match and we have to focus all of our attention on that and not on the UCLA game.”

“It always feels good to win, and them being number two in the nation just shows us that we are on the right track,” Harthaller said. “We show everyday in practice that we have the tools to beat every team. It is a long season and we are not even half way through, but we are excited to keep improving over the course of the second half and to see where this can take us when playoffs come around.”