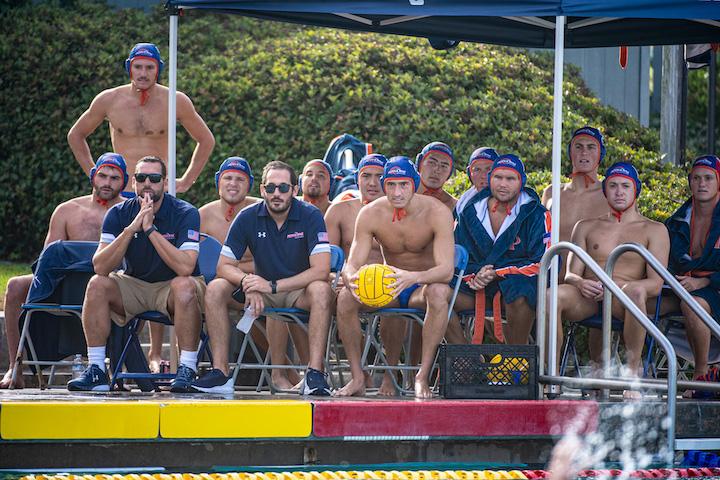 Pepperdine Men’s Water Polo’s bench watches the action during their season-opening match Sept. 4 against Cal Baptist. The Waves defeated the Lancers and won three of four games in their opening weekend at the Triton Invitational. Photos Courtesy of Sam Janicki

In a shortened spring season, Pepperdine Men’s Water Polo only played one opponent in the Golden Coast Conference — San Jose State, who faced the Waves five times. Each other school in the conference opted out of the season due to COVID-19 concerns.

“Last year, we were realistically only one game away from making it into NCAA’s,” senior attacker Sean Ferrari said. “[We’re doing] everything we can to put ourselves in the best position toward the end of the year to be able to win that GCC tournament and then inevitably win NCAA’s.”

In the most recent full season in 2019, the Waves won the GCC Tournament and reached the semifinals of the NCAA Tournament — the program’s first trip to NCAA’s since winning the national title in 1997.

Just six months after completing the unusual spring season, the Waves are back in the pool with a full and challenging 25-game regular-season schedule ahead.

The Waves entered the season ranked No. 5 in the nation in the Collegiate Water Polo Association’s preseason poll, but got off to a rocky start at the Triton Invitational in La Jolla, Calif. The CWPA ranked the Waves No. 10 in the following national poll, released Sept. 8.

The team scraped past No. 14 Cal Baptist 12-10 on Sept. 4, as the Lancers were within one goal with under three minutes remaining, then fell to hosts No. 9 UC San Diego 17-12 that afternoon.

“We didn’t really achieve our main goal which was get four wins but I do think we got a lot of valuable experience with things that we need to work on,” Ferrari said.

The following day, the Waves destroyed Biola 19-4 and Occidental 18-5 to finish the weekend 3-1.

“We did also play a couple of lower-level teams toward the end of the tournament so our younger guys got a lot of good valuable minutes in there,” Ferrari said. “[We were] just getting that initial first weekend out of the way, getting some of the nerves out.”

Pepperdine played without three sophomore Waves in the opening weekend — Nico Tierney, Travis Reynolds and Christian Hosea, who were competing for the U.S. at the FINA Men’s Junior World Championship in the Czech Republic.

Each Wave got significant minutes in the Czech Republic, where the U.S. team finished seventh. Tierney racked up 17 goals in the tournament.

“We were missing a couple key guys — some guys were forced to play some positions they don’t normally play,” Ferrari said. “But I think just our team defense needs to get a little bit better. That’s something that can easily be fixed.”

Reynolds, Tierney and Hosea are part of a group of underclassmen that emerged in the spring season and Ferrari expects to step into bigger roles in the fall 2021 season.

Tierney can shoot from distance in the offensive end of the pool and defend at the two-meter line, which will be critical to the Waves’ defense in the coming months, Ferrari said.

“We have really high expectations for those guys,” Ferrari said. “Their freshman years, they already came out and showed their dominance in the pool. For example, Nico plays a pretty vital position at two-meter defender — he’s like the quarterback of our defense.”

Tierney was second on the team in goals in the spring with 24. Not far behind was another sophomore, Jake Howerton, who was tied for fourth on the team with 24 points.

Ferrari is a critical returner for the Waves — the senior attacker was fourth on the team in goals in 2021 and facilitates the offense from the point position. He led the team with 10 goals at the Triton Invitational. 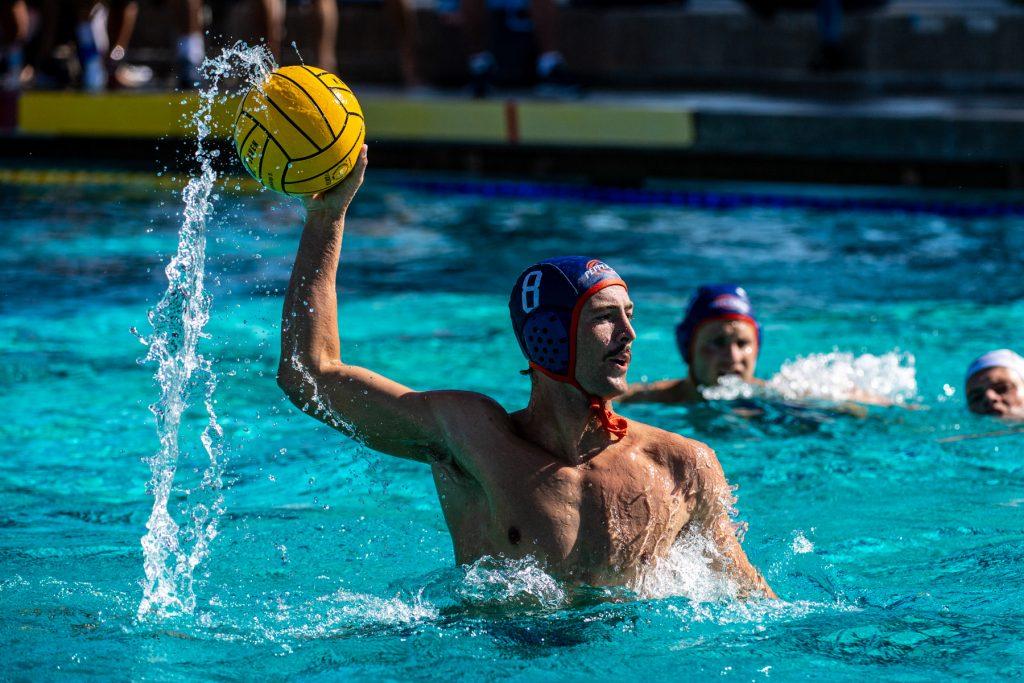 Pepperdine senior attacker Sean Ferrari rises out of the pool to attempt a shot Sept. 4 in a match against Cal Baptist in La Jolla, Calif. Ferrari scored ten goals for the Waves in the opening tournament.

Not to be overlooked, Balazs Kosa, a senior attacker and three-time All-American, is back. Kosa, a Hungarian national, will go down as one of the best players in Pepperdine’s rich water polo history — he is already 13th all-time in goals. Kosa had a quiet opening weekend, by his standards, with only six goals.

Junior goalkeeper Kent Emden, the primary goalie in the spring season, and redshirt senior center Coleman Carpenter are also back, but neither saw action in the opening weekend. Redshirt senior goalkeeper John Claude Marco, who has started 34 games in his career, will provide additional depth for the Waves in the cage.

One Wave who will not be in the pool this fall is attacker Curtis Jarvis, who is no longer on the roster. Jarvis was third on the team in goals in the spring season.

The top four teams in the preseason poll and most recent CWPA poll each play in the Mountain Pacific Sports Federation — UCLA, USC, UC Berkeley and Stanford, in that order. Those four schools combined have won all 23 NCAA championships since the Waves’ 1997 title.

The Waves play each of those teams in the regular season, beginning with a showdown with USC on Saturday, Sept. 11 in Los Angeles.

“You don’t get away with making mistakes as much so we just have to be sharp, ready to go,” Ferrari said. “Those games are so much more fun to play, and the crowds are usually bigger, so we’re really excited and we’re ready to go upset some of those teams this year.”

Three of Pepperdine’s GCC rivals are ranked No. 5, 6 and 7 in the recent poll — UC Santa Barbara, Long Beach State and Pacific. The Waves play each of those teams at least once in the regular season as well.

While the opponents will provide a stiff challenge, 29th-year head coach and water polo legend Terry Schroeder knows what it takes to prepare a team to play up to its potential.

“I can confidently say we’re always playing our best water polo toward the end of the season when it counts so I’m really looking forward to that time,” Ferrari said. 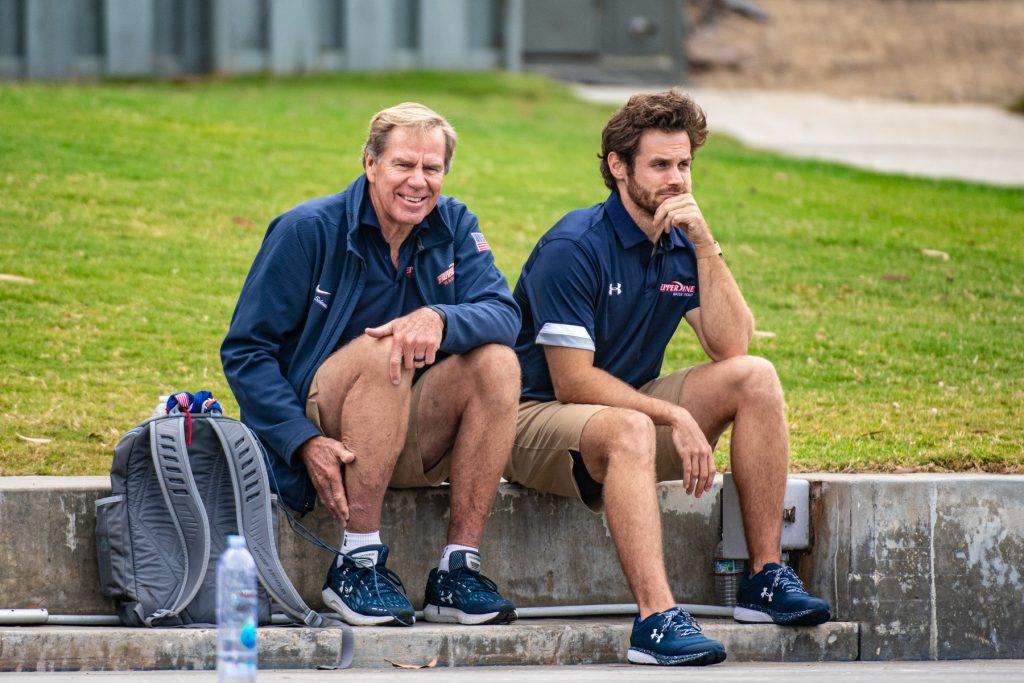 Pepperdine Head Coach Terry Schroeder and athletic trainer A.J. Vander Vorste share a smile during the Triton Invitational. Schroeder began his 29th season at the helm of the program this year. 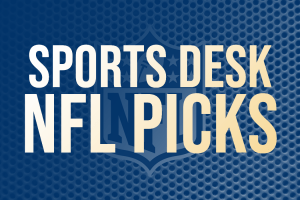 Graphic by Ali LevensThe 2021 NFL season is set to kick off this Thursday, Sept. 9, with the Dallas Cowboys traveling to the home...
Copyright 2013 Jupiter Premium Magazine Theme
Back to top