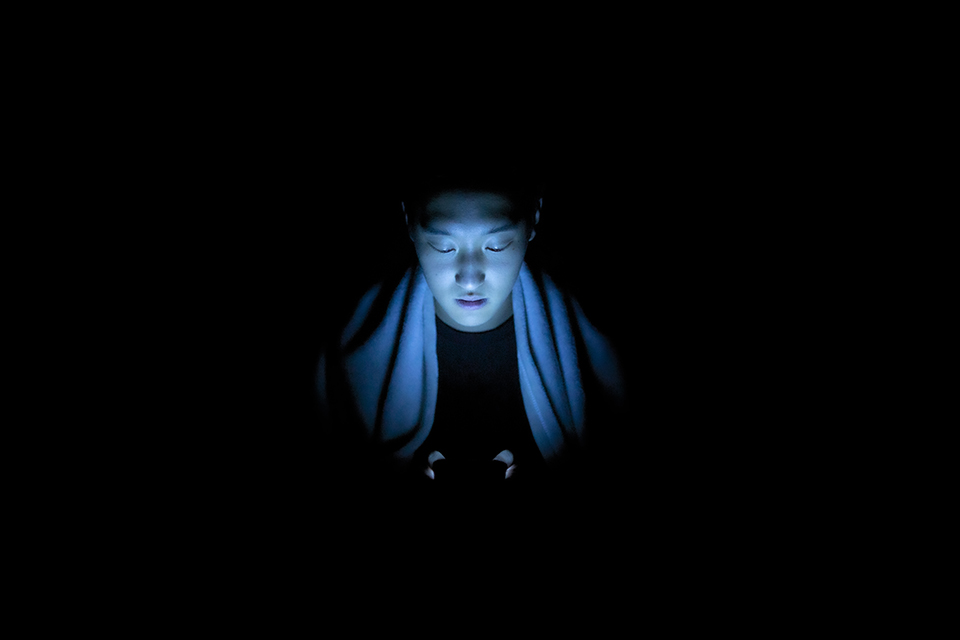 Glowing devices make communication easier and knowledge more accessible. However, using screens for prolonged periods in the evening may cause the decline of cognitive and communicative abilities.

In 2015, Bank of America conducted a research survey of American adults and found that 71% of respondents slept with their smartphones within arm’s-length. Many peruse their phones as they prepare to go to bed and continue to check their devices throughout the night.

Sophomore Lindsay Hack said she can tell the difference in the quality of her sleep depending on the length of time she spends on her phone at night.

“If I’ve had a long night of scrolling through Instagram or Twitter, it’s a lot harder to fall asleep and stay asleep,” Hack said.

The science behind blue light

Roy Raymann, the vice president of sleep science and scientific affairs at SleepScore Labs, has studied sleep for more than 25 years. He holds a doctorate in sleep neuroscience and contributed to Apple’s sleep-related iPhone features, including Night Shift. Additionally, he worked for tech company Philips to develop light products that improve sleep and alertness.

Raymann said blue light from screens is detrimental to sleep because of eye receptors that connect to the visual and sleep-wake systems of the brain.

“We have visual and non-visual light receptors that have a direct connection to a structure in your brain, which is called the suprachiasmatic nucleus, also known as your biological clock,” Raymann said. “The main purpose of that structure is to send a signal to our brain when there is light to wake us up. When it is dark, it sends a signal that it’s time to sleep.”

Raymann said blue light is particularly problematic for sleep cycles because of its connection to evolutionary biology.

“[Researchers] found out that the main light signal that is affecting this 24-hour cycle regulation is that of a specific bandwidth of blue light,” Raymann said. “This makes sense because if you look at the sky, it’s blue.”

Raymann said LED lights, the lights used to make phone screens, emit this bandwidth of blue light at very bright levels. However, the impact of blue light depends on the amount of light one is exposed to throughout the day.

“So far, studies on the effects of light on sleep show a direct effect of light on melatonin [the hormone that regulates the sleep-wake cycle], but it has been very hard to actually find direct effects it has on sleep itself,” Raymann said.

Raymann cited a 2015 Harvard study in which researchers compared reading a book for four hours in dimly-lit conditions to reading on an iPad for several hours on the brightest setting. The researchers found that the people who read on the iPad had more problems sleeping and showed lower levels of melatonin.

Raymann said he thinks the conclusions of this study are flawed when applied to the real world.

“Who the hell is actually reading four hours in a row on the brightest setting of an iPad just before bedtime?” Raymann said. “The effect of screen use at night also depends on the settings of your iPhone and the distance between your screen and your eyes. It’s very simple: the larger and brighter and whiter the screen, the more likely it is to disrupt your melatonin release.”

Solutions to the effects of blue light

Scientists like Raymann are now working with companies on solutions to limit the effects of blue light on sleep.

Hack said she has used the Night Shift feature since it first became available in 2017 because of its ability to improve her sleep.

“I have Night Shift set so it turns on automatically when the sun sets and turns off at sunrise,” Hack said. “It’s been really helpful; even when I’m using my phone at night, the screen just hurts my eyes less, and I think I sleep better, too.”

Another solution is blue light glasses, which are orange-tinted to counteract blue light waveforms. Upon entering college, freshman Matthew Furrer developed severe headaches and dryness in his eyes. He suspected it was from the long nights spent on his computer. A friend of Furrer recommended that he use blue light blocking glasses.

“My eyes don’t dry out anymore; they used to get super irritated by the computer,” Furrer said. “My headaches have gone away.”

Furrer said he opts to wear the glasses at night when he’s studying. Previously, when he wore the glasses in the day, people would make comments about them.

“Especially from my friends back home and my mom, they were all like, ‘Why are you wearing those?’ and I’m like, ‘Hey, they help me, man! C’mon!'”

Furrer said the biggest benefit the glasses provide is the flexibility to work into the evening.

“It gives me the freedom to do assignments whenever I want to,” Furrer said. “I don’t have to worry about getting headaches the next morning or having to take Advil before I sleep.”