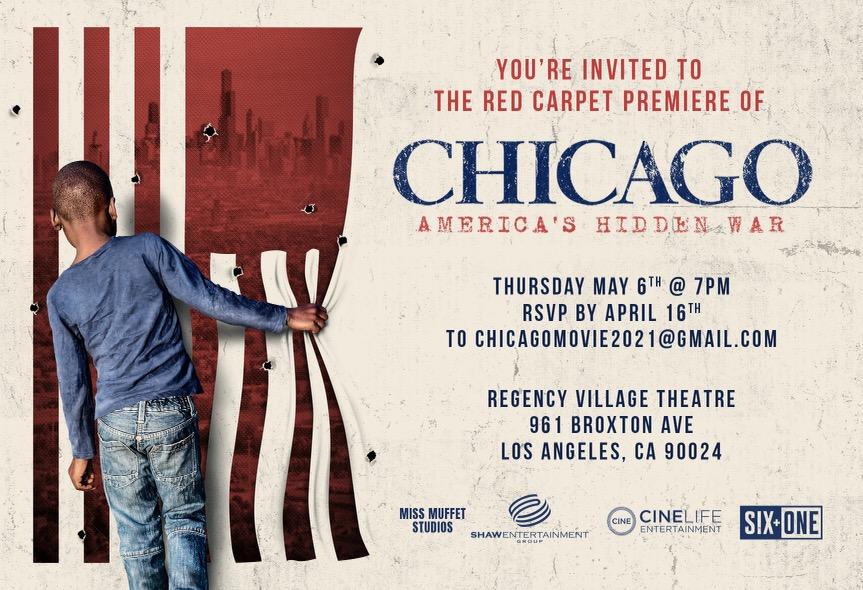 The film’s invitation for the red carpet premiere shows a child pulling back the curtain to show America the ongoing war in Chicago. The documentary featured interviews from children, ex-gang members, pastors and others who are contributing to ending the violence. Photo Courtesy of Shaw Entertainment

“I’ve slept under my bed for a month, just so I don’t get shot,” said Quincy, a nine year old from Chicago.

In the soul-stirring documentary, “Chicago: America’s Hidden War,” director Daylight Supreme forces the audience to acknowledge the shocking truth that someone is shot and killed every 11 hours in Chicago — the most dangerous city in the United States.

This movie contains so much heart and sacrifice and the audience is invested the entire time. You couldn’t hear a pin drop or see a dry eye.

The documentary’s red carpet premiere at the Regency Theater in Westwood, Calif., took place May 6 and Pepperdine’s Institute for Entertainment, Media, Sports and Culture sponsored the event. Director of IEMSC, Nelson Granados, was in attendance, as well as Film Program Director, Joi Carr, who led a panel discussion after the film.

The film exposes the genocidal-like behavior of gang violence happening in the South Side of Chicago, a system of evil that even the smallest of children are not exempt from. The film beautifully radiates an attitude of hope and incites the viewer to want to take action while helping end the violence.

The film features interviews with children who lost loved ones to violence and pastors who were trying to make a difference by supporting pregnant women and mentoring families. It also featured ex-gang members who provided first-hand knowledge on what that lifestyle involves.

The movie exposes shocking facts, including that more people have been killed in Chicago due to street violence than people killed in both Iraq and Afghanistan combined.

Supreme said during the panel that the subject of the documentary is extremely personal to him, as he became involved in gang activity at an early age. But when he found Christ, everything changed.

“I was dragged into the backyard with someone holding a gun to my head, when I said ‘Help me Jesus,'” Supreme said during the panel. “And every time he pulled the trigger, no bullets came out of that gun.”

The film didn’t hold back in any regard and could be triggering during some — if not all — parts. The film included audio and video from real shootings and live footage of police brutality.

The film is extremely timely and showed footage of recent instances of police brutality, including the murder of George Floyd.

Supreme tried to receive media attention toward this issue by going on a hunger strike, vowing to not eat any food until Chicago achieved a week of peace. He did not eat for 40 days and even spent time in the hospital.

Such an impactful and dramatic sentiment makes the viewer become more aware that the violence in Chicago refuses to cease.

Producer of the film, Tiffany Salaberrios, urged everyone to never be a bystander to any form of violence and to always require accountability. During the panel she said Darnella Frazier, the 17 year old who recorded the murder of Floyd, showed the world that you can be a good samaritan by standing with your phone for 9 minutes 29 seconds.

She said she hopes people like this can infiltrate Chicago and begin to expose shooters of certain gangs — if families of perpetrators are not willing to step forward.

“When a tornado hits, people look to the Red Cross, FEMA and all these different things — but there is a war going on in our soil,” Salaberrios said during the panel. “There is a war raging in the heartland and through education and exposure, we are able to see that everybody can respond.”

The documentary, featured on the Oscar‘s eligibility list, is an eye-opening and intense experience for anybody. As people realize that children in the United States continue to live in fear — afraid to go to the park, school, or church. The viewer can relate this movie not only to Chicago, but to gun violence all over the world.

As Supreme said, it is time as a society to turn our apathy into empathy and begin to better understand the world around us. Only when people stop shielding themselves from the truth can they begin to heal it.

“America has a huge generosity spirit, when we get together and say that the alarm is sounded — what we can do united is a beautiful thing,” Salaberrios said.