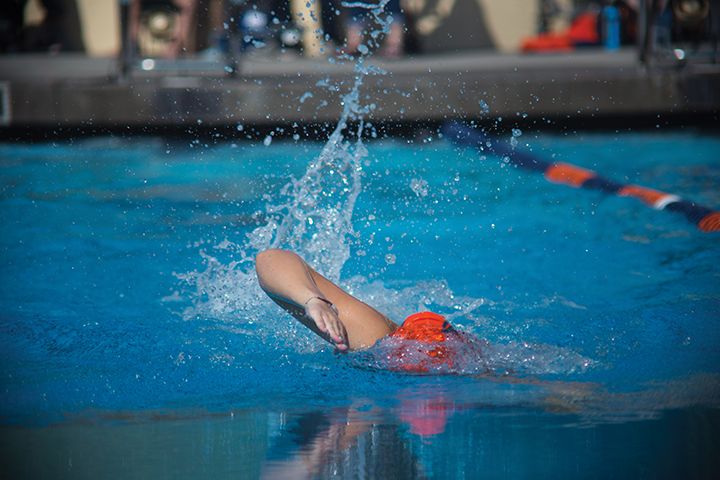 The Waves finished the long six-month season in a seventh place out of 12 teams at the Pacific Collegiate Swim and Dive Conference hosted at Pepperdine on Feb. 20-21. Many competitors put up personal bests, with junior Jessica Mosbaugh winning the 200 breast stroke for the second season in a row.

Mosbaugh contributed 85 points to the Waves’ cumulative score of 643, placing her as the seventh highest scorer out of 150 competitors. In addition to the victory, Mosbaugh recorded a personal best, crushing last year’s winning time of 2:16.04 by more than a second, 2:14.57. She met the NCAA B standard in both the 200 and 100, advancing her to the next level of competition.

“Once I made it back to finals, I was truly struck with lots of emotions and nerves.” Mosbaugh said about her race. “I wondered if I had it in me to win the 200 breast stroke for a second time. My teammates really helped calm me down before my race. I was already amped seeing how well they were doing in their final heats, so when it came time for me to swim, I got to the blocks and told myself, ‘Trust your training and go for it.’”

Among the other top-scoring Waves was junior Allison Naasz, who broke the school’s 200 freestyle record with 1:51.87. The record had been held since 1993 by Evy Wild at 1:52.60. Naasz also finished second in the program record books in the 100 freestyle, .22 seconds shy of first.

Naasz ranked 23rd overall, with 69 individual points for the Waves at the Championships.

“I was surprisingly calm before arriving at the meet. I was more excited than nervous because our training was really amplified this year, so I was excited to see everyone perform well,” Mosbaugh said. “Overall, the meet was fantastic all around. I have never seen our coach so excited, speechless and hopeful about the future of our program. Our girls really stepped up in every event and my teammates truly left all of the early mornings, lifting, beach workouts and effort in that pool. I couldn’t be more proud of this team.”

In the hopes of being selected to compete in the NCAA’s in Greensboro, North Carolina, Mosbaugh continues training. Mosbaugh’s goals are set in continuing to shed time and rise in the ranks of the swim world.

“My goals for the rest of my collegiate career would be to compete in NCAA Championships, whether it be this year or next,” Mosbaugh said. “I hope to keep increasing my training and strength and possibly going for an NCAA ‘A’ cut which would automatically qualify me for NCAAs as well as place me in the range of Olympic trials.”