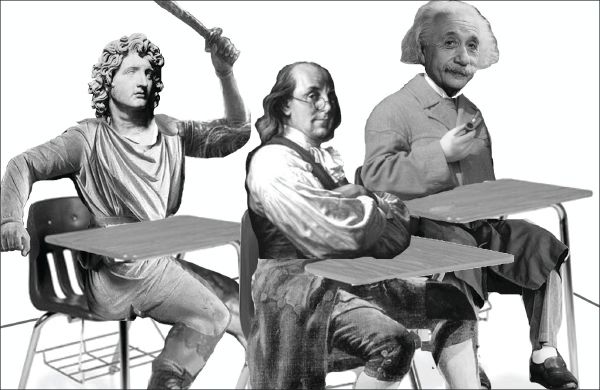 In the past, our label screamed misfits, tricksters, the “unclean,” satanic, inept. Even in the present age, we are still quietly discriminated against by government agencies, feared by religious institutions and ignored by educational systems simply because our dominant hand is our left — personal desks are designed with right-handers in mind; scissors, and even notebooks, are difficult to use.

But beyond the albeit softening social stigmas, scientific speculation exists concerning regions of the brain that lefties utilize and how that correlates to their function in society.

The brain splits into two hemispheres, right and left, and the right hemisphere controls the left side of the body while the left hemisphere controls the right. This function, known as the lateralization of the brain, is a process under continuous scientific scrutiny. Though we utilize both sides of our brains, each person has a dominant hemisphere that can also indicate which hand he or she is dexterous. Properties associated with the left side of the brain include mathematical, linguistic and logical abilities, whereas the right side unlocks the creative, imaginative and emotional caverns of our mind.

The overemphasis of left brain-right brain duality attaches certain stigmas to lefties — dominant culture impresses upon us that we are supposed to be more creative or communicative with our emotions than our left-brained, right-handed counterparts. Some scientists believe lefties are more susceptible to certain diseases, have lower IQs and are less monetarily successful than the rest of the population.

But according to Professor Joel Waldfogel’s article “Sinister and Rich,” featured in Slate Magazine, a recent study done in the United States concerning the success of left handers in a right hander world concludes that “Across the board, they found no discernible difference between the average hourly earnings, and other characteristics, of left and right-handed people. Both groups earned an average of $13.20 per hour in 1993. They also had identical average intelligence scores.” However, when researchers looked at the difference between left and right-handed college graduates, left-handers reported higher earnings than their right-handed peers — up to 15 percent.

Waldfogel also states that “left-handedness is also linked with creativity…Psychologists confirm that left-handedness involves different brain function: while right-handed people seem to have better cognitive skills on average, studies find that lefties are more common among the highly talented.”

There have been many successful left-handed people who made history, including Benjamin Franklin, Albert Einstein, Napoleon Bonaparte, Alexander the Great, Jimi Hendrix and Paul McCartney (to name a widespread few); all of our presidents since 1981 have also been left-handed (with the exception of George W. Bush). Many successful athletes are left-handed as well, especially those who play opposite their opponents.

Though lefties compete well in this right-handed world, there is startling research that demonstrates an increased tendency for sickness that the dominant population does not have. In general, lefties are not more likely to get sick but are more likely to get certain diseases — like high blood pressure or schizophrenia. This tendency baffles scientists today.

This medical mystery is just one of many remaining before lefties can be really understood, although thankfully society has shifted from a lefty fear to simple scientific befuddlement. Genetics and environmental factors deal heavily in the determination of handedness, but the statistic of only 10 percent of the population being left-handed has remained constant throughout history (another intriguing mystery): we, the 10 percent, might always be an overlooked minority.