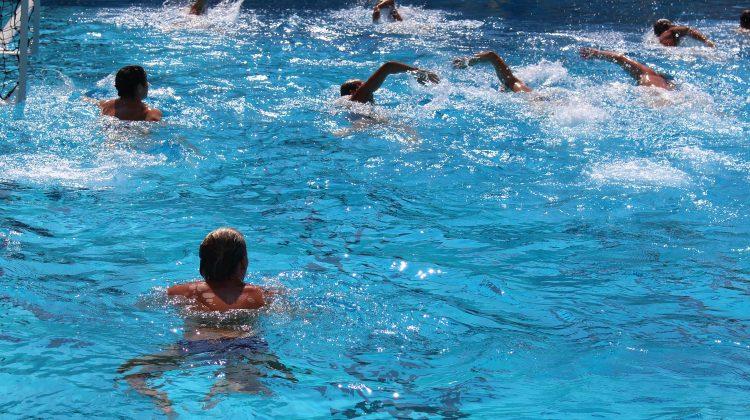 The Waves and Bears clash at Raleigh Runnels Memorial Pool on Sept. 18. The Waves bounced back after a tough defeat versus LMU with a convincing 20-5 victory. Photos by Chloe Chan

The Waves were already on a scoring tear — having a sizable 9-3 lead and commanding the pace of the game. The Waves outshot the Bears 15-12 at this point of the game on a .600% clip.

The Waves ended up bouncing back from their loss against LMU with a forceful 20-5 victory over No. 18 Brown on Sept. 18.

“Yesterday, we kind of had a little bit of lows, but today was definitely a bigger high,” redshirt junior center Nico Tierney said. “So [it’s been] kind of an up and down weekend, but we took the steps we needed today to improve to reach where we want to be in a couple of months.”

“[It’s a] giant part of the game,” Head Coach Terry Schroeder said. “We’ve been struggling with that and today was definitely much better. I think we scored our first three or four [goals off power plays] and we were six-for-eight [on power plays]. If we can get 60% on an extra man, that’s a really good percentage.”

The Waves got on the board 30 seconds into the game after freshman attacker Sandor Gal scored a goal.

Brown center Cole Atwell responded with the Bear’s first goal of the game, but after that play, the Waves locked up defensively and the Bears went one-for-seven the rest of the quarter.

“I think a lot of the time when we struggle is because guys aren’t really putting in their mental energy,” Tierney said. “But, today, guys are definitely focused on their defense, taking ownership and winning one-on-one individual battles. I think it is huge for us.”

Schroeder agreed with Tierney’s comment and said redshirt sophomore goalie Justin Edward is separating himself from the other goalies. The Waves experimented with four different goalies this past weekend.

“The goalie play inspires the defense in front of him and vice versa,” Schroeder said. “The defense has to be comfortable and inspired by the goalie, so it goes both ways.”

The Waves high-powered offense propelled them to go on a 7-0 run after Atwell’s goal. Senior center Austin Smit scored two of his three goals during this stretch. Schroeder had some high praise for Smit’s game as of late, and said that Smit did a good job of getting position and some kick outs early to set the tone in the first half.

“It sets the tone on the referees mind,” Schroeder said. “The whole game changes a little bit just coming out that way with some energy with some fire. We’ve got some pretty live arms. So, I’m not afraid of our ability to score goals, I just like to say our defense gets stronger as we go.”

The Bears would score back-to-back goals in the second quarter thanks to freshman attacker Daniel Hadar and senior defender Maxwell Patterson — but the Waves had already taken full control of the game at that point.

“I think we played pretty well on the defensive end,” senior attacker Christian Hosea said. “To give up to five goals — five goals isn’t a lot in a water polo game. The press that we had was really tight. And then, we made it really hard for them to pass the ball.”

The Waves forced the Bears into 18 turnovers throughout the game, justifying Mercado’s frustrations. Much of the Waves defensive effort was heralded to Edward, who had three steals.

The Waves did most of their damage in the third quarter — scoring nine goals. Jarvis, Hosea and Gal got in the act this quarter, and the Waves never looked back. Though the Waves have been historically consistent, they started the season with a 4-6 record. The team is still trying to figure out their identity, Tierney said.

“It’s going through a little bit of growing pains,” Tierney said. “We have a lot of talent, so it’s just trying to figure out where each piece fits in but we took a huge step forward today. So, we look forward to taking another step forward this afternoon and next week.”

Schroeder said sometimes the guys doing things away from the pool really helps.

The Waves look to build on this momentum in the MPSF Invitational Sept. 23.