Playing in a hostile environment at the Walter Pyramid, a young Pepperdine Men’s Volleyball team gave the two-time defending national champions a run for their money. Passing and service woes ultimately cost the No. 9 Waves, who fell in four sets.

Undefeated No. 4 Long Beach State won their 45th-consecutive home match at the Pyramid, a streak which includes their defeat of Pepperdine in the 2019 national semifinals.

“I don’t think we had a difficult time playing here,” Head Coach David Hunt said. “We came out in set one [and] played well — just one or two plays didn’t go our way.” 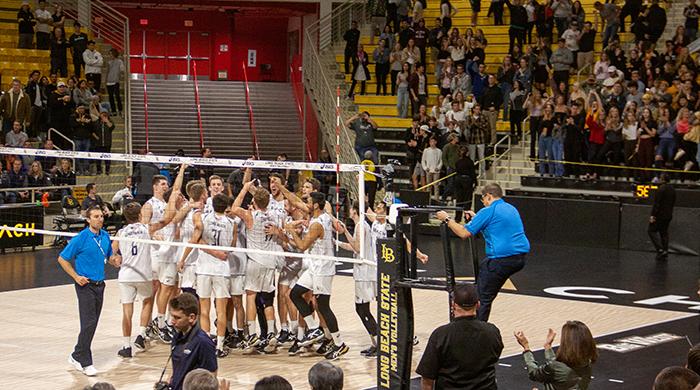 The 49ers celebrate their victory in front of a sizable crowd.

In front of more than 1,800 fans, Pepperdine controlled much of the first set, but three kills and an ace by Long Beach junior outside hitter Ethan Siegfried ignited a 6 –1 run that gave his team a 22–20 lead. The Beach would take the set 25–23.

Eleven different players saw the court for the Waves, who lost five starters from their 2019 team, which finished third in the nation.

“[It was the] first time I got to play here, so I was pretty excited about it,” sophomore outside hitter Ben Weinberg said. “Last time we were here was the [NCAA] Championships last year.”

Weinberg led the young attacking group for the Waves, registering four kills and a solo block in the first set.

In the second set, redshirt freshman opposite Jacob Steele recorded five of his 12 kills and a block, and Pepperdine held a narrow 12–11 lead. 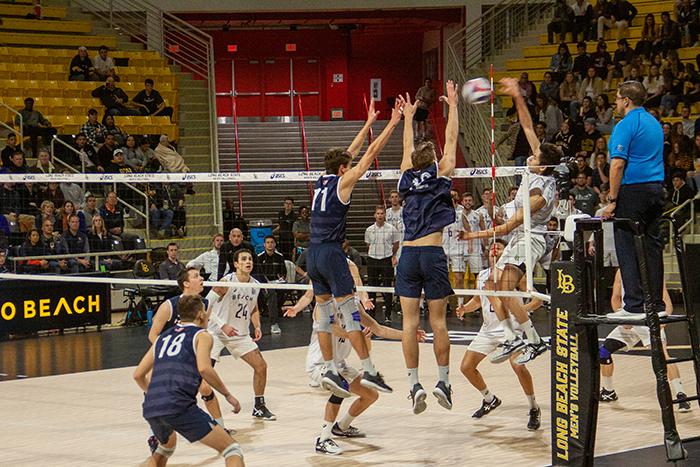 Martin (left) and Steele (right) elevate for a block attempt in the second set.

Unfortunately, the block and the Waves’ defense was not effective in the second set, as the Beach hit .458 in the set en route to a 25–18 set victory and a 2–0 lead in the match.

“Those guys did a nice job at the net,” Hunt said. “We just didn’t get the other team off the net enough to really exploit that.”

The Waves also committed four service errors in both the first and second sets, compared to only one in the third set, which the Waves would win.

“Our serve and pass game can be a lot better,” senior outside hitter Noah Dyer said. “I think we attacked pretty well tonight, but if we’re passing and serving a lot better, we can stay in system a lot easier.” 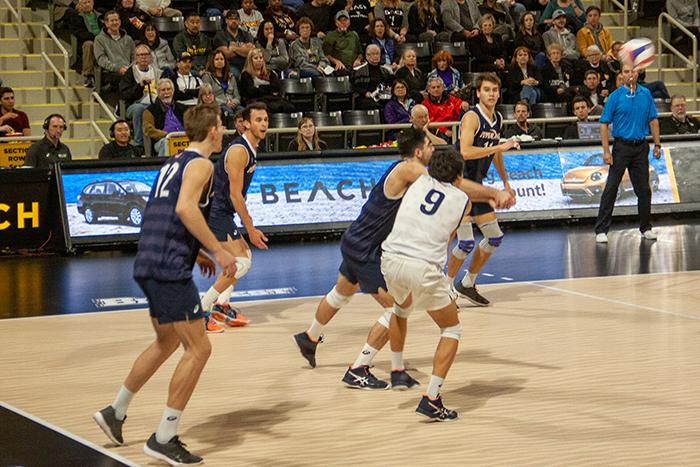 Pepperdine’s service and serve-receive games were at their best in the third set, and the attackers gained rhythm as a result. 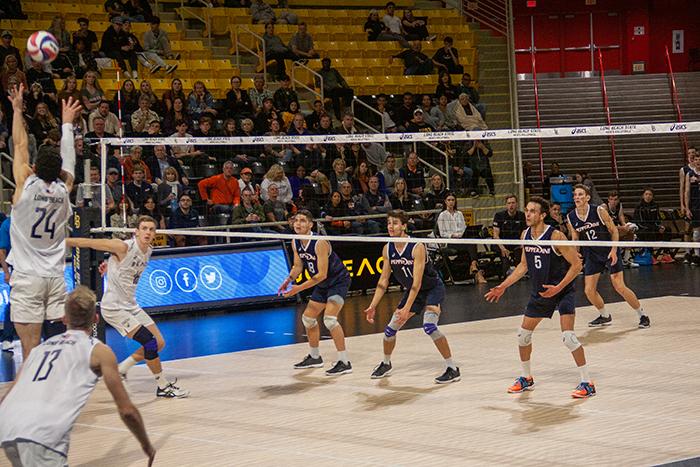 Dyer and Weinberg smashed six and five kills in the set, respectively, plus a block each, and the Waves took a set away from the Beach, 25–22.

“My thought going into [the third set] was ‘Nothing to lose,’” Weinberg said. “We’re down two sets, I’m just gonna hit as hard as I can and see what we can do with that … We had a pretty good set that set, and everybody fought pretty hard, and we swung pretty well.”

Our story about the match will be online at https://t.co/KggOshvvwi soon.

VIDEO: Senior outside hitter Noah Dyer gets a kill to clinch the third set for the Waves. pic.twitter.com/lAHX1p1IFz

The attacking momentum did not carry into the fourth set, as the Waves hit only .094 in the set and the Beach closed the match with a 25–15 victory. Siegfried led all hitters with 15 kills on a .353 hitting percentage and 10 digs. 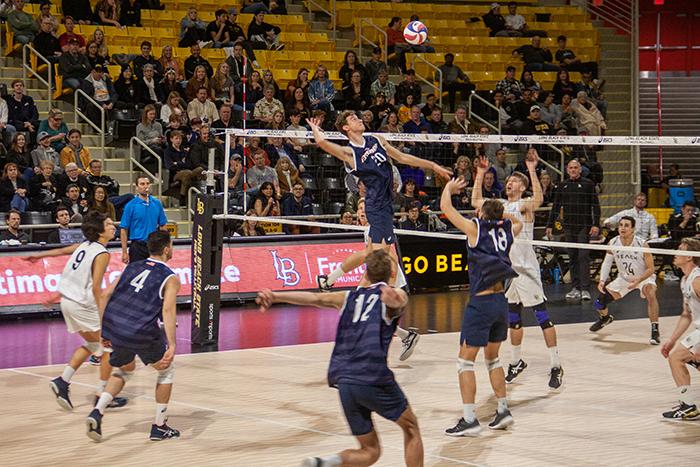 Wilmot takes a swing off a Mullahey set. Wilmot finished with eight kills on .500 hitting.

When the Waves trailed 8–3 in the final set, true freshman setter Joe Karlous entered for senior Rob Mullahey and played the remainder of the match.

Another true freshman, opposite Scott Solan, also got some playing time, appearing in three sets and recording two kills in the match.

“Even though the guys that we put out there to start — we give them latitude to go out there and compete — there’s a lot of guys that are chomping at the bit to play at every position,” Hunt said. “It’s always a work in progress, but the guys who are out there playing have earned it in practice, and I think that shows.”

Dyer was the only Wave who was on the court for every point of the match. He and Weinberg combined for 25 kills and 14 digs in the match.

“We mess around a lot in practice with different lineups and stuff like that … we really have faith in everybody on our team to come in and contribute well,” Dyer said. 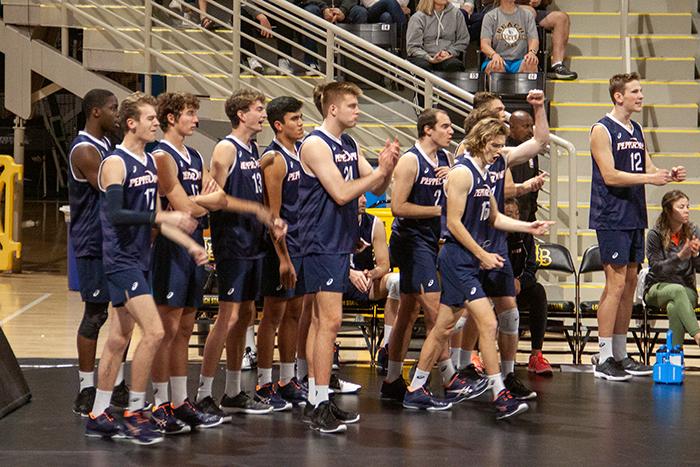 The Waves’ bench gets fired up in the second set Saturday.

As the team develops in the practice gym, their schedule continues to send them on the road.

The Waves went 2–1 on an East Coast road trip prior to the Long Beach match, and following a week without games, they will travel to face Mountain Pacific Sports Federation foes No. 8 Stanford and No. 2 Brigham Young (BYU) on Feb. 6 and Feb. 8, respectively.

“Our league’s packed with good opponents,” Hunt said. “Our focus is just getting better every day in practice so that, whoever we’re playing, we can play good volleyball.”

Pepperdine, now 3–2 on the season, finally plays back at Firestone Fieldhouse on Feb. 12 and 14 against conference opponents No. 14 Concordia-Irvine and Southern California, respectively.