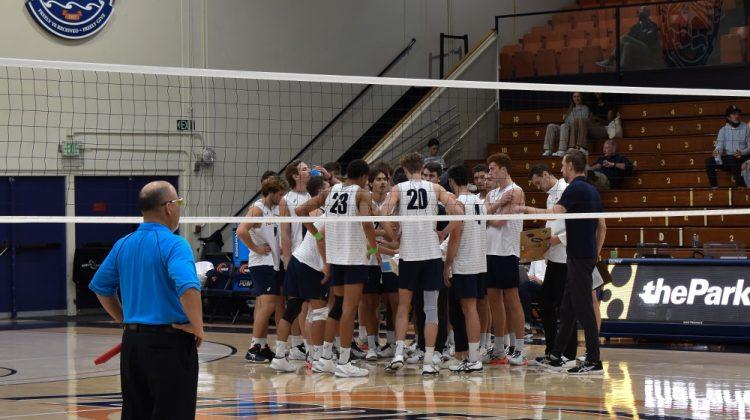 Pepperdine Men’s Volleyball Head Coach rallies the team during a timeout versus George Mason on March 11 at Firestone Fieldhouse. Head Coach David Hunt started as a video coordinator in 2007 and was promoted to assistant coach in 2010 before taking over as head coach in 2017. Photo by Audrey Hartono

Pepperdine Men’s Volleyball team announced Head Coach David Hunt would be stepping down as head coach following the team’s first-round exit of the NCAA tournament on May 5 via the team’s social media channels.

“I am deeply saddened that David Hunt will no longer be leading our men’s volleyball program,” Athletics Director Steve Potts said in a statement to Pepperdine Athletics. “I believe David [Hunt] to be one of the best volleyball coaches in the country and want to offer our sincere thanks for his commitment and dedication to the continuing growth and success of Pepperdine men’s volleyball. I wish and expect great success for David [Hunt] in all of his future coaching activities and beyond.”

Potts declined to comment further on the matter to the Graphic.

Graduate outside hitter Spencer Wickens said the team found out a week before the NCAA tournament that Hunt was leaving the team.

“[Hunt] emphasized the importance of our team’s culture over playing and improving our skill as much as you want us to get better,” Wickens said. “He also wanted us to feel supported and that he was there and cared for us. So that’s something I’ll take away as well.”

Hunt was able to create big game plans and understand what other teams were doing so the team could be prepped for matches, Wickens said. Hunt was a very good practice and game coach and was well-rounded in all aspects of what a coach needs to be, Wickens said.

“His practice plans were always very well thought out and they worked,” Wickens said. “They worked in what we need to work on as a team. And whether or not it was certain skill or different routes to run for offensive just always had a plan and we did a great job of making sure our practice was very competitive.”

As for his favorite memories, Wickens said the two would often golf together.

“I’ve been able to kick his butt,” Wickens said. “And I’ll always remember taking him down on the links. But, in general, I think some of the favorite memories are from him explaining to us how much we mean to him because we all know how much he meant to us in our program.”

Pepperdine continues to search for a new head coach for the upcoming season in Jan. 2023.