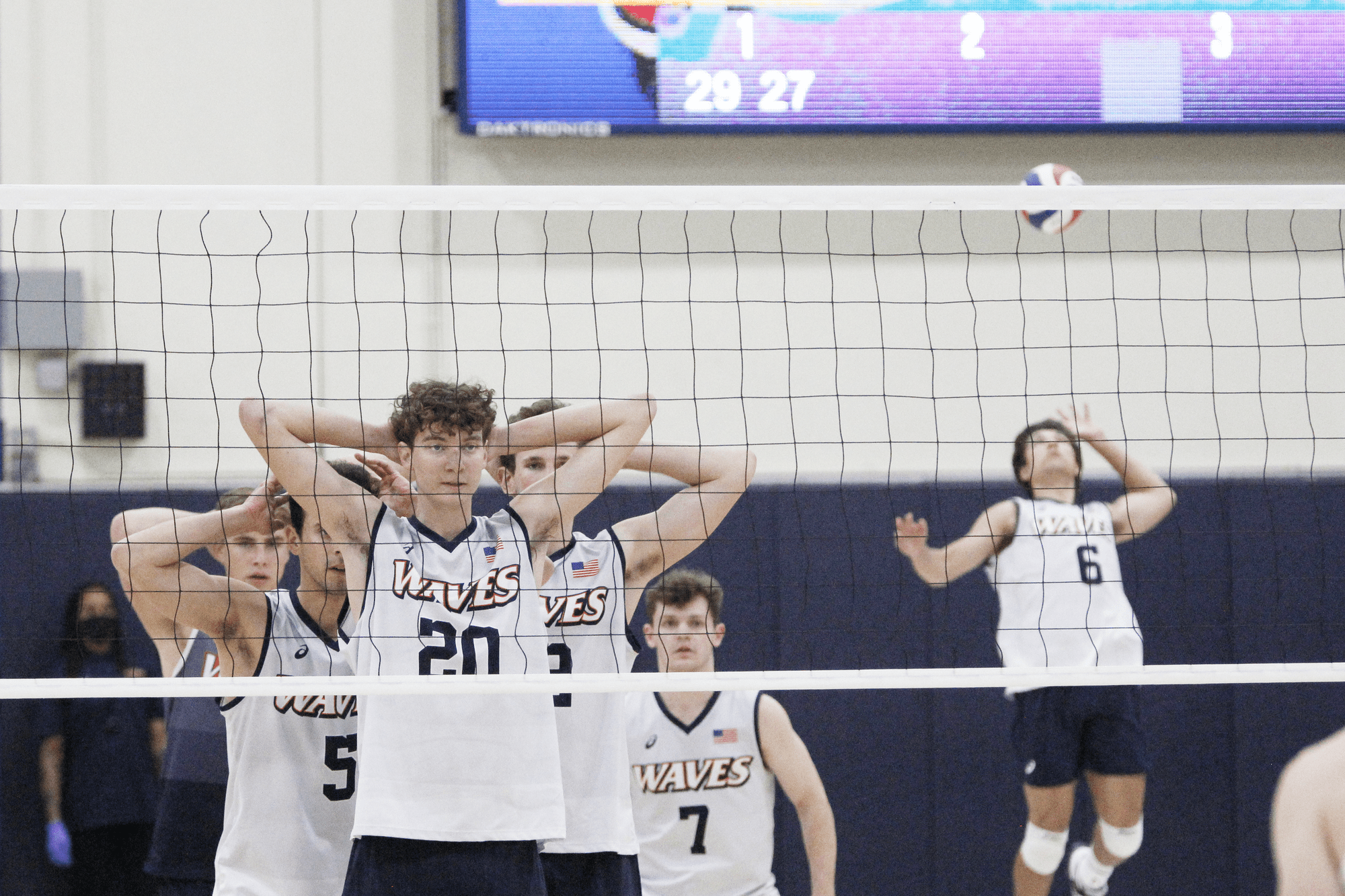 Freshman setter Bryce Dvorak serves while the rest of the team awaits a Grand Canyon University service at Firestone Fieldhouse on Sunday, March 28. This series sweep maintained the Waves’ undefeated 5-0 record at home.

The No. 5 Pepperdine Men’s Volleyball team defeated No. 9 Grand Canyon in a three-match weekend March 26-28. Despite facing tough battles, the Waves emerged victorious, ending the series with an 11-5 record and holding their third place standing in the Mountain Pacific Sports Federation.

The Waves are 5-0 in Firestone Fieldhouse against the Antelopes and 7-2 all-time.

“We knew it was going to be a grind going into the weekend and so it feels good to come out on top of it all,” redshirt sophomore opposite hitter Jacob Steele said.

The Lopes came out strong in the first set with two aces in the first two points. The Waves struggled to get their momentum, accumulating more attack errors than points through 7-4. At 8-5, the Waves got their feet underneath them, racking up kills from Steele, redshirt senior middle Austin Wilmot and two from freshman middle Andersen Fuller to even out the score, 9-9.

The Waves expanded their lead to 21-16 but faltered, with the Lopes earning several kills and getting back in the game. The teams exchanged hits and errors before a service error by GCU gave the Waves set-point and a Wilmot kill finished the set, 25-22.

The second set saw more aggressive plays at the net by the Waves, with senior outside Spencer Wickens and Steele slamming kills and even a pass-kill by freshman libero Trey Cole at 13-11. Redshirt senior outside Noah Dyer gave the Waves an ace for set-point, and Wickens sealed the set with a kill, ending 25-20.

The third set was filled with errors, with several service errors on both sides of the net — 3 from the Waves and 7 from the Lopes. The Waves accumulated 10 kills in the third set and 4 blocks. Fuller had three of those blocks: one solo, one with freshman setter Bryce Dvorak and one with Dyer. Steele ended it with a kill, finishing the set 25-21.

“Bryce had a great weekend,” Hunt said. “I think our team hit above .350 for the weekend against a really good team; I think that was credit to him to keeping our hitters involved.”

A Record-Breaking Battle on Saturday

The Lopes continued to struggle with serving from the start; their first serve was an error, and they accumulated six more over the set. The Waves came out swinging with kills from Wilmot, Steele and Wickens.

In set two, the Lopes came back with a vengeance, holding themselves to 3 service errors and increasing their kills to 17. The Waves fought hard, swinging at the net, earning 11 kills. However, the Waves registered 0 blocks and 5 attack errors, and GCU won the second set 25-21.

The third set was a hard won Waves victory. Pepperdine led from the start, with kills from Dvorak, Wilmot and Wickens. Steele and Wilmot logged two blocks, keeping the Lopes at 6 points while the Waves expanded their lead to 14-6.

GCU fought back, logging kills of their own by redshirt sophomore outside Christian Janke and redshirt senior middle Ian McClain, holding the Waves at set-point.

The teams challenged each other for the win until 28-28 when the Waves slammed two kills from Wilmot and Steele to end the set 30-28.

Set four saw a similar pattern to the second, with GCU coming out of the gate swinging, and taking a 5-1 lead. Pepperdine accumulated 15 kills over the set, but with six service errors and four attacking errors, they fell to the Lopes in the fourth set 25-21.

For the final set, the Waves stayed aggressive at the net, logging seven kills from six members of the team, and an ace by Wilmot. Dvorak helped end the match, slamming a kill for match-point and putting up a double-block with Fuller for the win. The Waves logged another win, but still needed to keep their momentum for the final match.

“I don’t think I’ve ever played the same team three times in a row, in terms of consecutive days, so we took the approach that there was just a lot of things we had to fix on our side of the net,” said Head Coach David Hunt. “It’s more of a marathon than a sprint.”

Sealing the Deal on Sunday

The match started slow, with an ace from the Lopes for the first point. Dvorak came out hot, placing smart jump sets across the court, giving Wilmot dimes to kill in the middle, which dropped right in front of the 10-foot line.

The Waves stayed aggressive at the net and behind the service line, with killer topspins by Steele and short floats from Wickens. The team placed smart balls, often right in front of or on top of the GCU defense. Two kills went straight to the faces or chests of Lopes players — one by Wickens and another by Wilmot at 21-18 and 21-19.

The Lopes pulled ahead for a bit, but Steele stopped their momentum with a kill straight to the libero at GCU’s set-point. The two teams battled at the net for the final points of the set, which ended with a float serve from Dyer and a hitting error by GCU to finish 29-27.

“We started off a little slow,” Wickens said. “We can use the excuse that we played three days in a row, but they came out firing and we needed to match their level and thankfully we did, and we kept that going throughout the rest of the match.”

The second set started with a Waves serve and a point won by Firestone, according to the Pepperdine bench, who cheered “Firestone, Firestone!” after the Lopes failed to return a ball that hit the ceiling.

“Our ceiling’s lower than most, usually we play sometimes in these big stadiums, if we’re lucky, where the ceiling’s really high, but when it helps us out we let it know we’re thankful for it,” Wickens said.

GCU took a short lead 5-4, but the Waves caught up thanks to a kill by Steele and two big blocks out of the right side by Fuller and Dvorak. The team stayed scrappy, sticking with the ball and running solid plays.

Cole led the back row defense, staying smart and getting under hard hits from the GCU offense — Cole collected five digs for the match and had a perfect receive average.

Steele logged 7 of his 12 kills for the match in the second set and Wickens hit 4 of his 14, ending the game with a .500 average. Steele took the game to set-point with a back row attack and Dyer finished it off on the outside, ending the set 26-24.

For the third set, the Waves took the lead and ran with it. A service error by GCU put an easy first point on the board, and a kill by Wilmot and a Steele Wilmot double-block set the pace.

Senior outside Alex Gettinger saw the floor serving for Fuller and gave the Waves two aces throughout the night, notably at 22-12 in the third set.

At 23-13, Steele lost a shoe on the court in a tangle up with Dyer, ending the rally on one foot.

“Somehow my shoe came off but nothing too bad, Noah [Dyer] finished the point for us,” Steele said.

Wickens finished the match with a big cross hit from the outside, sealing the Waves’ victory.

Due to COVID-19 protocols forcing a cancelation of the Pepperdine v. UCLA game on March 31, the Waves will end their regular season on the road at Stanford April 9-10.