The competition was the second ITA tournament hosted at Pepperdine this year but the first home court action for the six Waves.

Rico advanced furthest out of the Pepperdine men in the singles tournament. He started with a bye in the round of 128 then defeated Lucas Grego from Grand Canyon University in the round of 64 Thursday. He came back from a 3-1 deficit in the first set to win 6-4 and dominate the second set 6-2. 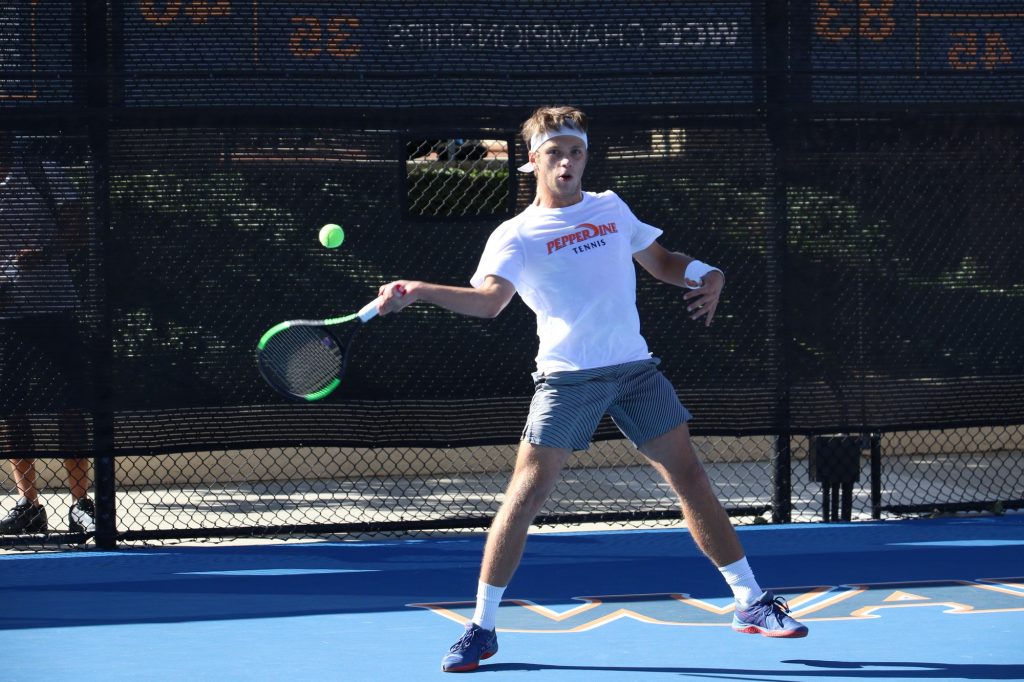 “Knowing where [Rico] is right now in his competitiveness, he’s going to be a good college player for Pepperdine,” Schaechterle said. “What we’re demanding from [him] is whether he can be a great college player.”

Rico’s next match was Friday against University of Southern California freshman Jake Sands, who eventually lost in the quarterfinals. Rico lost the first set in a tiebreaker 7-6(2) then lost the second set 6-2.

“At one moment, I think I was playing better than him,” Rico said. “After losing the first set, I ran out of gas.”

“Always the first matches of tournaments are difficult to play, and it’s important to win them,” Sborowitz said.

Sborowitz returned to the court on that warm Thursday afternoon and played another tightly contested three-set match, falling 7-5, 6-7(9), 6-2 at the hands of Logan Smith of USC. Smith went on to win the entire tournament.

“[Sborowitz] has improved more than anybody else on the team,” Schaechterle said. “For him, it was a big confidence builder.”

Baez and Jankowiak also recorded wins in the tournament on Thursday. In the round of 128, Baez defeated Eric Kenneth from University of Hawaii in three sets, 6-4, 4-6, 6-4. Jankowiak’s round of 128 win came against Daly Meinert of Cal Poly San Luis Obispo. The match was close, but Jankowiak won in two sets, 7-5, 7-5.

“I thought that [Jankowiak] had probably the best win in a Waves uniform,” Schaechterle told Pepperdine Athletics, according to the department website’s recap of the game.

Later that day, both Baez and Jankowiak lost in the round of 64 in straight sets. Baez lost to Lorenzo Fucile of Grand Canyon 6-0, 6-1 and Gui Osorio of the University of San Diego beat Jankowiak 6-0, 6-1.

The final two Waves, Galvao and Garapedian, each lost their opening singles matches in straight sets, although both were tight battles. Roman Shenkiryk of Cal Poly bested Galvao 6-4, 7-5 and Tristan Martin of Hawaii prevailed over Garapedian 6-4, 7-6(9).

“[Garapedian] and [redshirt junior Adrian Oetzbach] have done an unbelievable job as leaders,” Schaechterle said. “It’s worth mentioning that they have just done a great job getting after it every day.”

“It was the first time we played doubles together,” Sborowitz said. “The good thing is that we can see the errors now and have two more months to practice.”

“I’m very happy with how the guys are buying into the culture that we’re building, but I think there’s still some steps we can take just in how we practice and how we do our daily work,” Schaechterle said.