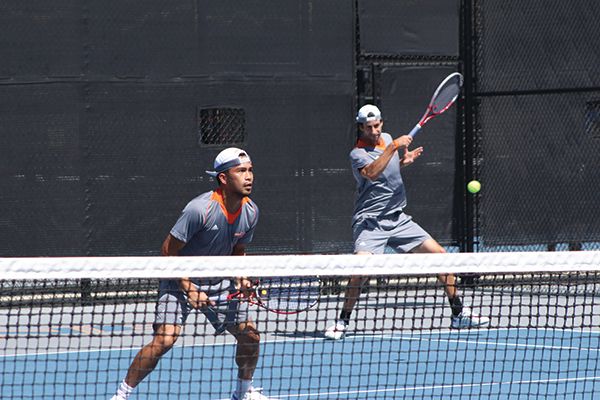 The West Coast Conference Doubles Team of the Week honors fall to Pepperdine seniors Alex Sarkissian and Francis Alcantara, better known on the courts as Sarge and Nino. Pepperdine’s top duo, and by far the top ranked team in the league at No. 15 nationally, have been triumphant for the better part of the season at 16-5 overall and 4-2 against ranked opponents.

Alcantara was also selected Singles Player of the Week, marking the third time this season that the Waves have taken the honor.

Pepperdine, ranked No. 45 at the moment, has seen some ups and downs recently when they powered past San Francisco, but were upset against No. 17 Cal this weekend.

“The season has been up and down. We’ve shown a lot of promise and we’re still optimistic about the end of the season … we expect to win the conference tournament and have a shot at trying to make the Sweet 16 of the NCAA tournament, and anything can happen from there,” senior David Sofaer said.

The weekend started out right for the Waves against USF on Friday when Pepperdine picked up the first victory of the day with the pairing of sophomore Pedro Leme and freshman Alex Giannini, and clinched the doubles point when the Sarkissian-Alcantara duo also took victory. Later that day, Pepperdine swept their singles matches, beating out their opponents in straight sets on all courts, only losing one singles match that day.

On Sunday, the ball did not bounce in favor of the Waves and they were stopped just short of victory against Cal. The Waves dropped the doubles point but posted three singles victories, only to fall when Sofaer faltered against Cal’s Filip Bergevi in the third set.

Win or lose on the courts, the Waves are definitely winners in the hearts of the Redding family, whose 9-year-old son Sully has been adopted into the Waves family. The story here starts with Head Coach Adam Steinberg, who started the involvement of the Pepperdine men’s tennis team with the Friends of Jaclyn Foundation. Friends of Jaclyn is an organization whose mission is to improve the quality of life for children and their families who are battling pediatric brain tumours and to raise awareness about this disease. FoJ pairs these children with college and high school sports teams, who support them with love and friendship to create lasting relationships. And this is what the Waves have done with Sully.

“We adopted Sully a year ago, and have a relationship with him which is special. He is a part of our team … The day was great for Sully and the foundation. It’s very important to make him and their family feel like they are a part [of us],” said Sofaer.

This week has seen the Waves return to fighting form, as the team took the win against Santa Clara 4-0 on Tuesday with Sofaer, Leme and freshman Tom Hill’s success in singles in straight sets and the doubles matchup of Leme-Hill and Sarkissian-Alcantara taking the doubles point. The Waves next play BYU on the road this weekend.

To learn more about the Friends of Jaclyn Foundation, visit their website.