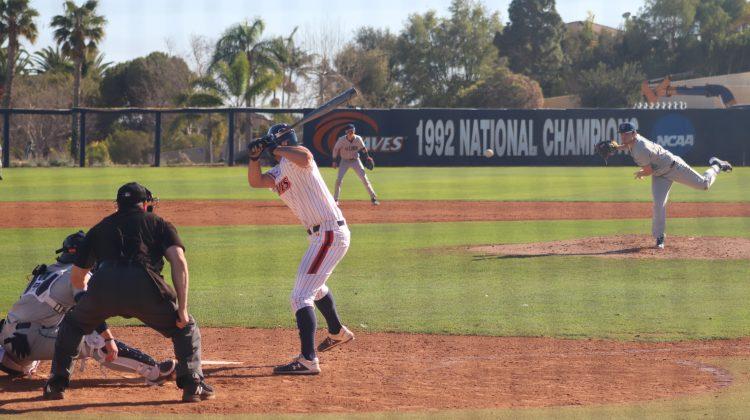 Pepperdine’s senior third baseman Greg Mehlhaff readies his stance in the Feb. 19 game against the Villanova Wildcats. Mehlhaff achieved a .538 hitting average over the weekend. Photo by Denver Patterson

Pepperdine’s Men’s Baseball team (3-0) started the series with a sweep, winning all three games against the Villanova Wildcats (0-3) on Feb 18-20.

This game marked both the first time the Waves have faced the Wildcats, and the season opener for the Waves, who are slated to finish fifth in the WCC conference this year.

“I like for them to be able to work hard in practice and compete in the game,” Head Coach Rick Hirtensteiner said. “And that’s the thing when you get into the season you never know how a certain group will react in close games. They’ll find ways to win or find ways to lose. So I’m looking forward to seeing just how the competitive culture of this group grows once the season starts.”

Waves Pull off a Close Game on Saturday

Villanova started the game strong with graduate student Chris Rotondo‘s home run to left of center, scoring the first run of the game at the top of the first. Sophomore starting pitcher Brandon Llewellyn struck out two players an out at first shut the inning down in short order.

Llewellyn would go on to throw 74 pitches, with 51 strikes.

“It was definitely fun watching the game yesterday,” Llewellyn said. “I kind of knew how I was gonna attack the hitters and just play baseball and not really worry too much.”

At the bottom of the first, Pepperdine couldn’t score with a flyball caught in the outfield and a double play on first and second. The second inning passed without either team scoring.

Pepperdine sophomore Connor Bradshaw made it on first thanks to a grounder down the center, but two pop-flys and a hit directly into the pitcher’s mitt held the Waves at 1-0.

At the top of the third, Pepperdine got two Villanova players out at first, and a pop-fly to right field made for a quick inning.

At the bottom of the third, sophomore Charles Masino shot a ball down the hole between second and the Wildcat’s shortstop to reach first base.

“I think we’re all really confident our abilities,” Johnson said. “Their starter came out and threw really well, but we battled and had some good ABs and we ended up coming out on top.”

Redshirt junior Michael Winaker hit a ball toward the shortstop, who threw the ball to the second baseman. He stepped off the plate, and Masino blew through to third, with Winaker landing on first. Freshman Cam Conley made a sacrifice play, securing one RBI. Villanova made two more outs, and the Waves ended the inning tied with Villanova at 1-1.

Villanova ended the fourth inning with only one man on base, and Pepperdine was also unable to make any headway. The score stayed tied until the top of the eighth inning, with Pepperdine switching out Llewellyn for senior Jack Baird in the top of the seventh.

Villanova’s junior Vance Anderson made it to first, despite having a 0-2 count. Villanova’s freshman Connor Hale bunted. Hale made it to second, with Anderson on third and no outs on the scoreboard.

Rotondo was up at bat again, with a count of 2-2. Rotondo hit his second home run of the day, only this time, he managed to bring in a total of three runs. Villanova was up 4-1 in the eighth inning.

Pepperdine’s defense pulled together to make the three outs and entered the next inning with only two chances to bring up the score. Pepperdine was down three, but they weren’t out.

Graduate student Mike Malinchak struck out, but Masino hit a grounder down the center, making it to first base.

Junior infielder Michael Winaker hit a grounder to second, Masino slid under Villanova’s second baseman and was safe on second with Winaker on first base. Conley hit to right field, and the bases were loaded with one out.

Sophomore infielder John Peck hit left of center with one RBI. The score stood at 4-2, and freshman first baseman Devon Walczykowski struck out.

Pepperdine was down two, with two outs and three players on base. Villanova switched pitchers, bringing in graduate student Cameron Mathes. Junior Ryan Johnson walked up to the plate. Mathes threw a ball. Mathes winds up again, and clang, Johnson hits Pepperdine’s first home run of the day with three men on base.

“I was trying to get a good pitch you know, all my buddies got on base in front of me we had some nice hits and good pitch get busy hit it,” Johnson said.

The grand slam brought the Waves up 4-6.

“It doesn’t really get much better than that,” Llewellyn said. “That’s baseball. They came out of that home round in the top eight that put us down for a couple of minutes but Johnson is out there doing his thing.”

A pop fly near the fence ended the inning, and Villanova couldn’t make up the runs in the ninth inning. With this, Pepperdine won the weekend against Villanova, but to sweep, the Waves would need a repeat performance on Sunday.

“Now that we’ve won two, you have to look to sweep and not have a letdown and just be satisfied with winning two out of three,” Hirtenstiener said. “And we have to prepare tomorrow as if it’s a Friday game and come out with the same energy and intensity.”

In the bottom of the first inning Peck sent a hit to Villanova’s first baseman Joey Castellanos, and Peck was out at first. Pepperdine senior third baseman Greg Mehlhaff hit a grounder down center, making it onto first base, Johnson struck out at the plate and Bradshaw hit a single, resulting in two men on base and two outs.

Walczykowski sent a grounder that hit Villanova’s pitcher in the shin. Mehlhaff ran in, and the Waves took the first run of the game at 0-1. Next up, Conley hit a single to left field, and Bradshaw bolted home, lengthening the Waves lead to 0-2. Pepperdine would collect the next out, and the Waves moved into the next inning with an advantage.

In the bottom of the second, Pepperdine hit two pop-flys to Nova’s outfield, racking up two early outs. Peck hit a single, and went on to steal second base, after Villanova’s pitcher’s first ball to Mehlhaff, who collected his second RBI with a hit between right field and second. Pepperdine was up 3-0.

Mehlhaff netted a .538 hitting average over the course of the weekend.

“Last year, I was injured all year,” Mehlhaff said. “So I worked through summer and everything to get back and get the swing out. And, you know, coming out here is the first time I’ve started all three games in a weekend in my career, just dealing with injuries and everything and I just tried to simplify and stay short to the ball.”

Johnson hit a double with Mehlhaff on third. Bradshaw collected two RBI’s giving Pepperdine a lead of five before Villanova even made it on the scoreboard.

Villanova switched out their pitcher, Devin Rivera, with Cole Vanderslice. Despite the switch, Pepperdine scored one run in the bottom of the thurf, Malinchak hitting a single and stealing second, and Masino’s double to the outfield bringing him home.

In the top of the fourth, Morrow walked O’Reilly, but struck out two players, and Bradshaw caught a pop-fly in center field.

“He [Morrow] did a really good job of locating both sides of the plate with his fastball and changing speeds with his curveball and changeup,” said Pepperdine’s new pitching coach, Cameron Rowland. “You know, again, he started the tempo and we had some guys out of the pendant did a really nice job of stepping up as well in big time situations.”

Villanova switched the defensive lineup again, with Cade Udella pitching and AJ Hansen in left field. Johnson battled and hit a double to left field, Bradshaw got out at first, and Walczykowski was walked with a 4-0 count. Villanova switched the pitcher, subbing in Johnathon Cole. The catcher dropped the ball and allowed Johnson to steal home, but Villanova’s second baseman Pat O’Neil caught a pop-fly and Cole struck out Malinchak.

In the top of the fifth inning, the tide began to turn for Villanova. The bases stood loaded with no outs, and Morrow walked in a run. Malinchak caught a fly ball in right field, and Mehlhaff forced an out at third, but Villanova scored another run before the Waves could make the third out, bringing the score to 7-2.

Pepperdine scored two more runs to keep the gap at seven points, thanks to RBIs from Mehlhaff and Johnson.

At the bottom of the eighth, Malinchak’s double got Pepperdine on the bases, Masino’s RBI solidified the Waves’ win at 7-10.

“The four years I’ve been here we haven’t beat them yet,” Mehlhaff said. “So it’s something that we’re definitely gearing up for and we’re definitely is on our minds now looking for Tuesday, because we want to get that first one against some really bad and so hopefully we can go out there and swing it a little bit and yeah, hopefully we can take another one home with us.”