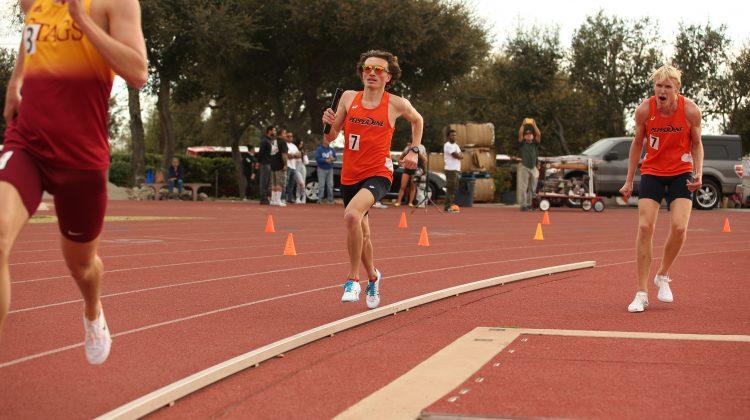 Pepperdine Men’s and Women’s track broke a variety of school and personal records in their races March 11 and 12.

“All around, everyone in everyone’s individual event did really well,” Junior mid-distance runner Skyler Danley said. “It’s nice to see that, especially at the beginning of the season, there’s so much we can do to get better by the end of April.”

Danley said Floris tailoring workouts to the team and the positive team environment contributed to the success the team received.

“Every time I go to practice, we’re all kind of in it together, working together,” Danley said. “And we all have workout groups and people that we can train with and practice with, and then going into races being with each other. I think it’s just really motivating.”

Floris said they were surprised when Winter’s race started slow, but he beat his own school record in the men’s 5,000 meters — knocking 30 seconds off his time with a smooth first place finish at 13:57.52.

“He stayed really calm and ran with the pack through the first part of the race,” Floris said.

The 10k was crowded, Floris said. In 2021 at the Bryan Clay Invitational, McCabe ran the race on his own although Winter and graduated senior Justin Touhey acted as pacers for the first half. This race, McCabe had other competitors to pace with, as the race broke up around the 7k meter mark.

Floris said McCabe was cognizant of who was in front of him, and would consciously stick to the end of the train, staying with the pack.

“You could tell that he was starting to get tired but he was just really hanging on,” Floris said. “All the splits were super consistent. He got really competitive with one of the kids that was back by him and they went back and forth a little bit at the end, which was great to see him responding, even though he was running so much faster than his PR.”

Saturday was the first race in which each athlete was competing in the event that was their focus, Floris said.

Hemphill was within two seconds of the school record in the event at 1:53.61. While Floris said there are technical aspects to work on, she is excited to see Hemphill run in a faster field.

“It’s always good when you run fast but you know there’s things you can do better,” Floris said. “He doesn’t like to lead races. That first lap went out kind of slow, and in the 800, you never want a slow first lap.”

Danley ran the first steeplechase of her college career. In high school, Floris said, the steeple distance is 2,000 meters, whereas in college, it’s 3,000 meters.

“It was definitely fun,” Danley said. “I didn’t do super amazingly time-wise, but I placed pretty well, which was nice in the race. And it was nice to just get my feet into it and just do it for once. It definitely destroyed my legs, I cannot walk down the stairs.”

Because Danley has another year at Pepperdine, Floris said she hopes Danley can get close to or under the school record.

“She just had the best hurdles or barriers that I’ve seen out of a steeplechaser,” Floris said. “She looked really smooth over them she was really strong in between the hurdles. For her, the thing we’re working on [is] the water jumps, because that’s the thing that we don’t have a bunch of facilities to practice.”

In high school, Danley said fewer runners can practice the water portion of the steeplechase, so no one is completely comfortable with the element. In college, most of the competition had some familiarity.

“It was really fun to see her improve just over the course of the race, getting comfortable with it,” Floris said. “Her first four she was struggling with that, but over the second half of the race, they were getting better and better.”

To focus on the water jump, Danley said she and Floris are looking for places within the area to practice, such as Santa Monica College.

“I think just taking it one barrier at a time,” Danley said. “Because a lot of the times during the race you can just get caught up in thinking, ‘Oh my gosh I have to get over the water jump seven times, I have to get over 40 hurdles,’ So it gets overwhelming.”

Danley said her goal is around 11:25, and because the event is on the smaller side, to stay with the top runners.

Sprinters senior Tiffany Egbo and freshman Lauren Rocco secured heat wins in the 400-meter dash and 100-meter hurdles, respectively. Egbo had a PR of 2.7 seconds faster than her previous time at 1:00.52 and sophomore sprinter William Watkins also had a PR in the 400 at 50.48.

Floris said the women sprinters had a lot of races since the beginning of the season because they run indoor track in addition to outdoor. Now the sprinters are looking at a three-week break before their next race.

“I’m really excited for them to have this block of training coming up before our next meet,” Floris said. “I think the longest the sprinters will have gone without a race. And so I know that we’ll be working with hurdle technique and they’re always working on their starts.”

Saturday’s 5k contained seven heats for women and nine for men. Floris said this resulted in two Pepperdine athletes at most in the same race — meaning each runner had their chance to shine.

“The rest of the team is still there,” Floris said. “They get to cheer everybody on and they all get excited all spread around the track. Everybody was in a different race, but everybody ran so smart — both the men and the women. They were really controlled at the start of their races. When things started to move the second half, that all covered moves and raced really well, so it was exciting to see.”

Before the next race, Floris said the team will have four larger workouts, but also the opportunity to increase aerobic fitness and volume.

“Overall, it’ll be nice, I think a nice little mental break from racing time to just focus on getting quality work,” Floris said.