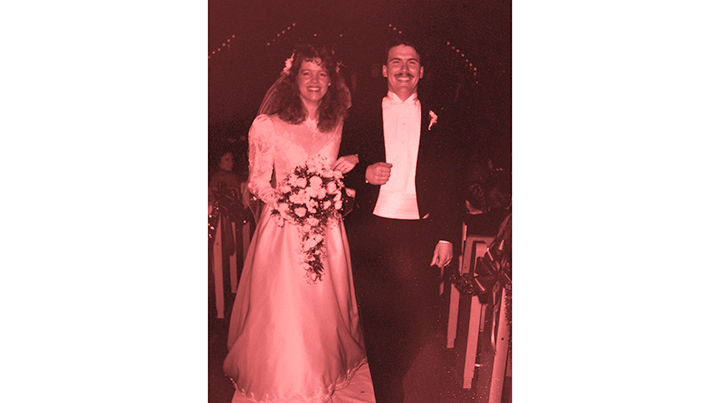 Carrie and Andy Wall’s relationship may have formed 36 years ago, but their story begins long before the two attended Pepperdine together and even before the two were born.

Both second-generation Waves and children of couples who married while studying at Pepperdine, Carrie Giboney and Andy Wall grew up as family friends. Once the two were students in Malibu, their love built upon the history they shared. Years later, Carrie Wall is now a Teacher Education professor and Andy Wall serves as the preaching minister of the Conejo Valley Church of Christ.

“I saw a lifetime of Andy Wall,” Carrie Wall said. “I saw his servant heart. I saw his love for God. I saw that he was a man of integrity. I saw the way he treated every single person. His life for 21 years, I admired from afar.”

Carrie’s parents, Terry and Susan Giboney, and Andy’s parents, Phil and Lois Wall, were members of a Pepperdine missions club in the 1960s. While the Giboneys moved to Japan for mission work, giving birth to Carrie there, the Walls were missionaries in Greece, where Andy spent his early childhood.

The families would see each other every year at the Yosemite Bible Encampment, a camp for Church of Christ families in Southern California. At the time, the age divide between Carrie and Andy was too large to bridge, Carrie said. Three grades apart, the two were always good friends but nothing more.

Andy said he began to take special notice of Carrie when he invited her and her friend to participate in his ‘taco ministry,’ a shared meal time at his apartment.

“Over a couple-year period I had dozens and dozens of people over for Thursday night taco ministry, and so one of the things that I noticed was Carrie was the only one who ever stayed to help with dishes or even offered,” Andy said.

Carrie said she could tell the atmosphere was changing in their relationship. Andy called Carrie during the Christmas break to ask if he could come visit her. After hanging up the phone, Carrie said she did something completely uncharacteristic.

“I left the room, I went into the living room, I stood up on the coffee table, and I said, ‘I just talked to the man I’m going to marry!’”

When Andy did visit, he asked Carrie if she would be his girlfriend. Carrie said the decision was easy.

While they knew quickly they wanted to be married, Carrie was determined to live out her college experience. Thus commenced three years of long-distance love and a semester of writing letters when Carrie studied abroad in Heidelberg, Germany.

They married shortly after she graduated, continuing what Carrie calls “a legacy of love.” Together they have three daughters — all graduates of Pepperdine — to whom Carrie gave important advice on relationships as they grew up, stemming from the lessons she learned.

Devoted to one another, Carrie married the man behind the vacuum cleaner, and Andy married the one taco ministry guest willing to help with the dishes.

“She has this beautiful blend of tough and tender,” Andy said. “She can be tough, she can call me out, but she can also be so tender and gracious, and I love and appreciate that she calls out the best in me.”