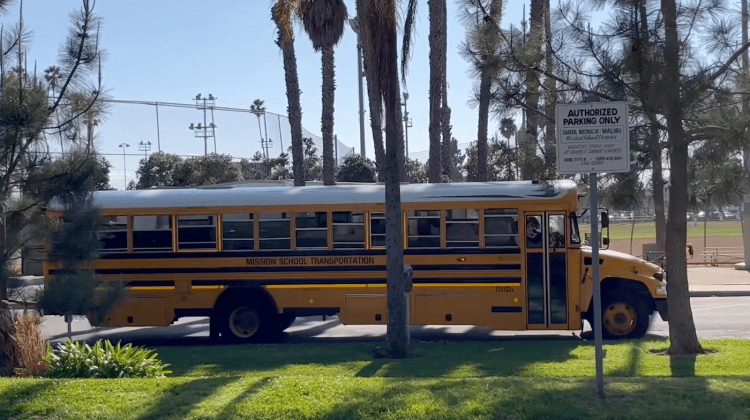 A Mission School Transportation bus drives in front of the SMMUSD Administrative Building on its way to Crossroads Elementary School. The Santa Monica school district would be disconnected from Malibu should the district split. Photo by Karl Winter.

SMMUSD Board Member Craig Foster said talks of separating the district have been happening for several decades. Malibu and SMMUSD have exchanged financial offers since 2017, and the school board rejected the city’s most recent proposal and voted to resubmit their own in a closed session March 3.

“The Board also voted 6-1 to reject the City of Malibu’s best and final offer of Jan. 11 because the offer actually represented a lower amount than the city had previously offered,” School Board President Maria Leon-Vazquez said at the March 3 meeting.

A History of Separation

Foster — the only board member from Malibu — started working at the district in 2010. He said he always advocated for district separation.

The push for a district separation, although present for decades, gained momentum in the past five years. Foster credited the Woolsey Fire and COVID-19 pandemic as events that highlighted the differences between the communities.

In November 2018, Woolsey burned through Malibu, destroying over 1,600 structures, but Santa Monica went unaffected as the fire spread west.

“Their response to that […] was as heartfelt as it could be, but it was disconnected as it would be if you were 25 miles away,” Foster said. “Santa Monica has their own fire department, their own police department. Malibu is LA County Fire, LA County Sheriff’s Department — even the emergency response vectors are different.”

Foster said COVID precautions that made sense in urban Santa Monica versus the less-dense Malibu area drove some Malibu parents to send their children to private schools like Oaks Christian or other districts like Las Virgenes Unified School District.

Jason Jarvis, an assistant professor at the Caruso School of Law, moved from Santa Monica to Malibu in February, but his two sons still go to Santa Monica High School. Pepperdine Jumpstart coordinator Stacy Rouse lives on campus and has two children who graduated from Malibu High School.

The two parents said they agree most SMMUSD parents recognize the necessity of district separation.

“We’re in a new stage, where for the most part, it makes sense to people to no longer be connected,” Rouse said. “I think where the argument is now is, how does that separation happen?”

The present reorganization push ramped up in early 2021. The City of Malibu filed a petition April 17 to the Los Angeles County Office of Education’s Committee on School District Organization. The Committee moved the petition into their “regular petition process” Sept. 18, after the City provided supplemental materials to clarify some of the petition’s points. Malibu asked the Committee to hold off on its petition consideration until it comes to a financial agreement with SMMUSD.

SMMUSD Superintendent Ben Drati wrote in a letter to district parents Sept. 10 that “the Petition submitted by the Malibu City Council is not the way to separate as it is harmful to the students in both territories.”

Malibu gave a presentation at the Nov. 10 LACOE Committee hearing summarizing the city’s efforts up to that point. The presentation pointed out that SMMUSD had rejected their financial offers for four years, including one from March that Malibu labeled its “Best and Final Offer”.

The presentation outlined the city’s best offer, saying Malibu would “transfer additional property taxes for up to 10 years, if [Santa Monica Unified School District’s] per pupil funding falls below current levels of $16,000.”

At a March 2 LACOE Committee meeting, Malibu Deputy City Attorney Christine Wood said Malibu had amended its offer Jan. 11, offering SMMUSD $40 million over a 10-year period. Wood said the city sees the offer as generous, but the District rejected the offer the next day.

On Jan. 26, the City of Malibu submitted their feasibility analysis, which addresses nine criteria the California Department of Education requires for district reorganizations.

One criteria requires the new districts to have separate community identities. Residents of Malibu and Santa Monica agree both cities meet this requirement.

“It’s kind of bizarre geographically to have to have them together,” Jarvis said. “Especially since Malibu is so far up the coast and geographically and I would say culturally removed from what Santa Monica is.”

The geographical separation between Malibu and Santa Monica adds to the distinction between the communities, according to Malibu’s feasibility study. Foster said multiple school district headquarters are closer to Malibu High School than the SMMUSD headquarters.

At a LACOE Committee meeting Feb. 2, Wood said SMMUSD agreed to mediation and asked for a one-month pause in the committee’s consideration of Malibu’s petition. The second mediation session, scheduled for March 26, will happen before the next LACOE meeting April 6.

Foster said the petition could move forward in the next committee meeting if the mediation goes well.

“Once Malibu makes its petition live again, because Malibu asked the county to pause a month ago, once it goes live, it will be decided very quickly,” Foster said. “Because, well, they moved into their regular channel, and there are set timelines on dealing with petitions in the regular channel.”

The committee will base its decision on whether the proposal follows the state’s nine criteria, based on the Malibu feasibility study as well as its own, which has not been released.