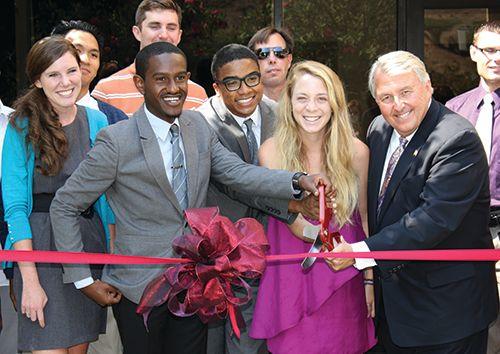 Huge smiles, words of gratitude and excitement led up to the moment that President Andrew K. Benton ceremoniously cut the ribbon at the grand opening of the Lovernich common area yesterday morning.

SGA hosted the event to commemorate a number of years of hard work and collaboration that went into the renovations of the Lovernich common area, according to the SGA President, Demisse Selassie.

Several groups on campus including SGA, Housing and Residence Life and the Department of Design and Construction (previously known as Construction and Campus Planning) worked together to convert the former Special Programs offices into a shared space for Lovernich residents.

“I was shocked when I got the email inviting me to the opening,” Mimi Rothfus, International Programs Coordinator of Admissions and Preparation said.

Rothfus, the president who helped push to pass the resolution that finalized the renovations, though she said SGA has been pushing to have a Lovernich common area ever since Special Programs had moved in there.

“I texted everyone who had been on SGA with me,” she said. “We’re all so excited. This is so rewarding. I never imagined it looking like this.”

Lovernich is usually the first to go when it comes time for students to sign up for housing for the following year, Associate Dean of Students Brian Dawson said.

“The students absolutely love it [the new common area],”Vice President of Finance Rafaello Sampang said. “I study there every single night, and I never see it empty. We just want to thank everyone that’s had a hand in this.”

But the process has been very long. Rothfus, along with two senators, petitioned the students to support the project when she was vice president of administration as a junior in 2010 to 2011. SGA continued to work with administration for approval through her senior year, and after graduation she passed it on to last year’s SGA President Christie Myers.

Rothfus expressed confidence in what Lovernich can do as a legacy. “The best thing about it is knowing that it really has been a process,” Rothfus said. “So many people who are not on SGA are discouraged because they think SGA doesn’t do anything, but this really does show that SGA makes a difference. Change doesn’t happen overnight. So I really hope that this shows SGA can make changes, it just takes time.”

Executive Vice President Sarah Houston also said she was proud of the work that went into the renovation over the years. “It’s been so cool to see that it actually happened,” she said. “One thing that’s really cool about student government is the ‘passing on.’ Not everything is going to take a year, but it does happen. And this is just an amazing event.”

And the changes are drastic. The room consists of new couches, chairs, electronics and even a new floor.

The Senior Project Manager of the Department of Design and Construction Ben M. Veenendaal, who graduated from Pepperdine in fall of 2012 and was a member of the SGA executive board, headed the design of the project with his team. He said they began designing and planning months ago after the design team met with the SGA board last year.

“We knew that we wanted a few specific elements,” Veenendaal said. “The furniture can be moved, and the tables can be expanded. We wanted to make sure we would have power so that students could plug in their laptops or anything they had that was electronic.”

But actual construction, which took about two months, did not begin until mid-summer because of the summer school schedule.

Much of the construction and also a lot of the money for the project went into making the Lovernich common area more handicap accessible, according to Veenendaal. “We did interior design, but we also added features to make it more accessible. So a good amount of the money went into redoing some of the parking stalls and the ramp and a couple of other features.”

The floor was also replaced and is now made of bamboo, Veenendaal said.

“Bamboo can grow an inch in 24 hours, so it’s highly renewable,” he said. “This is strand bamboo, which is actually supposed to be harder than oak, so it should wear well and last a long time. And it looks good. It’s the first time we’re trying it on campus.”

The ceiling, on the other hand, was not replaced, though it is nearly impossible to tell that it is old.

“When we came up with the master plan, I really wanted to make sure we were using the money right and not wasting money on something that’s not going to have an impact,” Veenendaal said. “I thought about it and I looked at the construction of the roof above the ceiling and decided it’s not worth the money, and I think the ceiling actually blends itself well.”

We all need potatoes 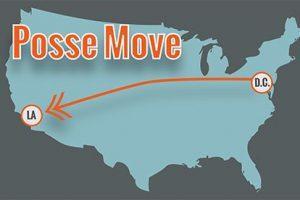 Art by Xander Hayes Since 1989, the Posse scholarship program has partnered with more than 40 universities in order to provide...
Copyright 2013 Jupiter Premium Magazine Theme
Back to top