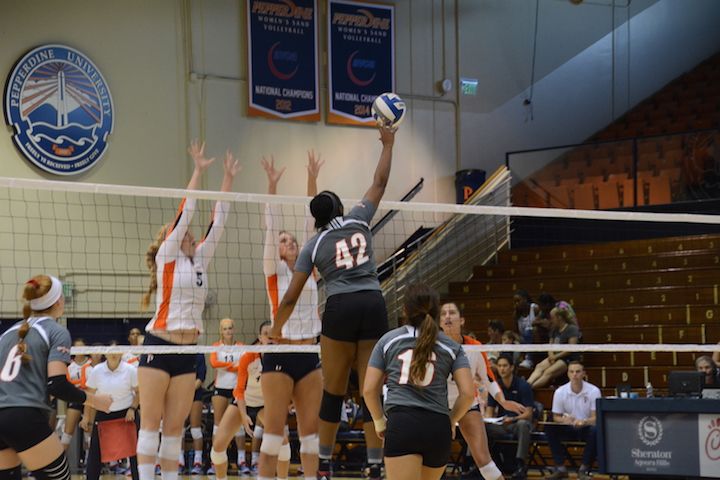 All the way in Nashville, Tennessee, the women’s volleyball team kicked off the Lipscomb Invitational with style. A convincing 3-1 win over Florida Atlantic last Friday gave the fans a taste of what the Waves are capable of this season. Their stunning start, however, was stalled by a 3-1 loss to Lipscomb later that day. But a subsequent 3-0 thrashing over Ball State on Saturday saw the Waves conclude the weekend with a straight-set win.

“After our Lipscomb tournament, the team knew going into playing that all the teams we were going up against were undefeated,” senior setter Becca Strehlow said. “We had to prepare as a team and focus on the task ahead of us.”

Pepperdine started the Labor Day weekend with a strong 3-1 win over Florida Atlantic University. But as much as the result suggests a comfortable win, it wasn’t all that easy.

The Waves had a slow start, losing the first set 25-23 and putting FAU at a 1-0 lead. Taking advantage of several top-notch serves from senior libero Lara Dykstra, Pepperdine bounced back in the second set with a 25-18 win, tying the game at 1-1.

With momentum on their side and Dykstra in top form at the service line, the Waves took the 2-1 lead with a 25-21 win in the third set. In the fourth set, Pepperdine battled closely with FAU, but Dykstra made the difference once again, putting 25-20 on the scoreboard and starting the day off with 3-1 win.

The main frustration of the weekend came just a few hours later with the Waves’ first defeat of the season. The Waves fought hard but looked second-best against a highly offensive Lipscomb University, who jumped to an early 1-0 lead with a strong 25-22 win in the first set.

The Waves, however, were by no means a walk in the park for Lipscomb. Led by sophomore Ashley Morgan at the service line, Pepperdine put together a strong second set performance, winning 25-23 and tying the game 1-1.

Lipscomb came back stronger in the third set, staying ahead of the Waves through the entirety of the set, and putting Pepperdine at a 2-1 deficit with a 25-21 win.

The fourth set proved the toughest, with the Waves fighting closely against their Southern rivals. Pepperdine came off to an early 10-7 lead, but couldn’t keep the momentum going toward the end, eventually suffering a 25-23 defeat, losing the match 3-1.

However, on Saturday the Waves came back, and what a comeback it was. With 14 points from freshman Tarah Wylie, 40 assists from senior setter Becca Strehlow and Dykstra once again on fire at the serving line, the Waves bagged their sixth win of the season with a 3-0 victory against Ball State — partials of 25-16, 25-21 and 25-7.

“We played well all weekend, had a tough loss against Lipscomb, but we knew that loss will only be able to help us prepare and get better for the upcoming season,” said Strehlow.

Next up, the Waves will be making the short journey to USC for the USC Invitational, where they will be taking on New Mexico and USC today at 12:30 p.m. and 8 p.m., respectively. Closing the tournament, Pepperdine faces Utah State tomorrow at 12:30 p.m.