“Ozone Layer Depletion Slows Climate Change” does well in celebrating the accomplishment between scientists and policy makers to reduce ozone-depleting substances. Nevertheless, the piece, focusing on the serendipitous effects of the Montreal Protocol in 1987 to reduce greenhouse gas emissions, places an overemphasis on the ozone’s role as a greenhouse gas.

For example, the article claims that the atrophy of the ozone layer itself slowed climate change by allowing heat to escape through the weakened atmosphere. According to NASA, the ozone hole has a minor cooling effect that is 2 percent of the warming effect of greenhouse gases. However, this effect is more than nullified considering that CFCs, the chemical species primarily responsible for the ozone hole, account for 13 percent of the energy absorbed by human-produced greenhouse gases. This “beneficial” atrophy and cooling is simply the result of the emission of extremely potent greenhouse gases — occasionally even tens of thousands times stronger than carbon dioxide.

I believe that the Graphic might benefit from a science journalist, for I fear that the tone of this article does not appreciate the full environmental repercussions of ozone depletion, especially concerning the impact of increased solar radiation on human health. I do wish that the facts would have been presented differently so as to not frame stratospheric ozone as a major player in climate change, especially for those who merely glanced at the title of the article. 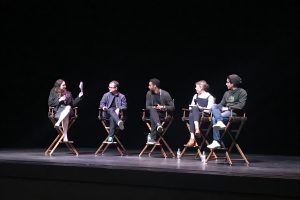 Photos by Sofia Telch The Pepperdine student body and staff intermixed for a screening of the pilot episode of ABC's new legal...
Copyright 2013 Jupiter Premium Magazine Theme
Back to top