Pepperdine sanctioned a witch doctor to visit us on Friday night, and let me tell you, this false prophet did not disappoint. The Bible says, “Beware of false prophets, who come to you in sheep’s clothing but inwardly are ravenous wolves,” but about 10 minutes in I would’ve followed Kellogg to the gates of Hell and back. James wasn’t wearing sheep’s clothing — he was wearing a pretty awesome cross-encrusted Affliction-style button down — but he was controlling people’s minds, and a week later I’m still coming down from the experience.

I saw people hug complete strangers in fits of terror and be convinced they were orangutans, all from a man with a spinning wheel and a microphone. It was nothing short of the most incredible night of my life. I think it’s safe to say I can never look at the participants of that night’s event the same way again.

I will see one of the girls who was hypnotized walking around main campus and remember her only as that girl who cried when she thought she won a new car.

I will see one of the guys at Jamba Juice and remember him as the guy who jumped on a HAWC table and started eating lice off a girl’s head.

I did not believe in hypnosis before Friday night. I am enlightened now and ashamed for ever doubting. The things people did while “under” James’ spell for over an hour were things no human would normally do in front of a large group of strangers. They shook their booties to “Gangnam Style,” they cried when watching a non-existent film, and they fell to the ground in agony from a terrible bout of hemorrhoids.

Is hypnosis funny? Absolutely. Is it ethical? I guess it depends on the person doing it, because for a while there it seemed like James Kellogg could have made those people do whatever he wanted them to do. To be fair, it seemed that everyone who volunteered was willing to do so, and after the fact they were great sports about the whole ordeal. Most of them bought a DVD of the show. I would’ve hid in my room for a month and penned hand-written apologies to everyone in attendance.

Dear stranger in the red coat, I’m sorry I danced up on you with my butt. I hate the song “Gangnam Style” and will never forgive myself for what I did.

Was the hypnotist who came on Friday a performer of the Dark Arts? I don’t think so; he was actually a really nice guy. I don’t know what to take away from the whole event. It was probably the most Pepperdine-y thing I have ever attended.

But that’s what I’m going to miss about this school. I didn’t have anything better to do, and I’m glad I live in a place where no one looks down on you for making a fool of yourself, whether you were the one dancing on a table like a monkey or standing in the back laughing your butt off.

Get your satisfaction at Larchmont Bungalow 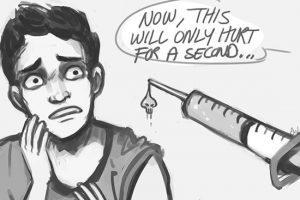 Art by Andrea Wijaya Every year, doctors advise their patients to get flu shots to protect themselves against the influenza...
Copyright 2013 Jupiter Premium Magazine Theme
Back to top