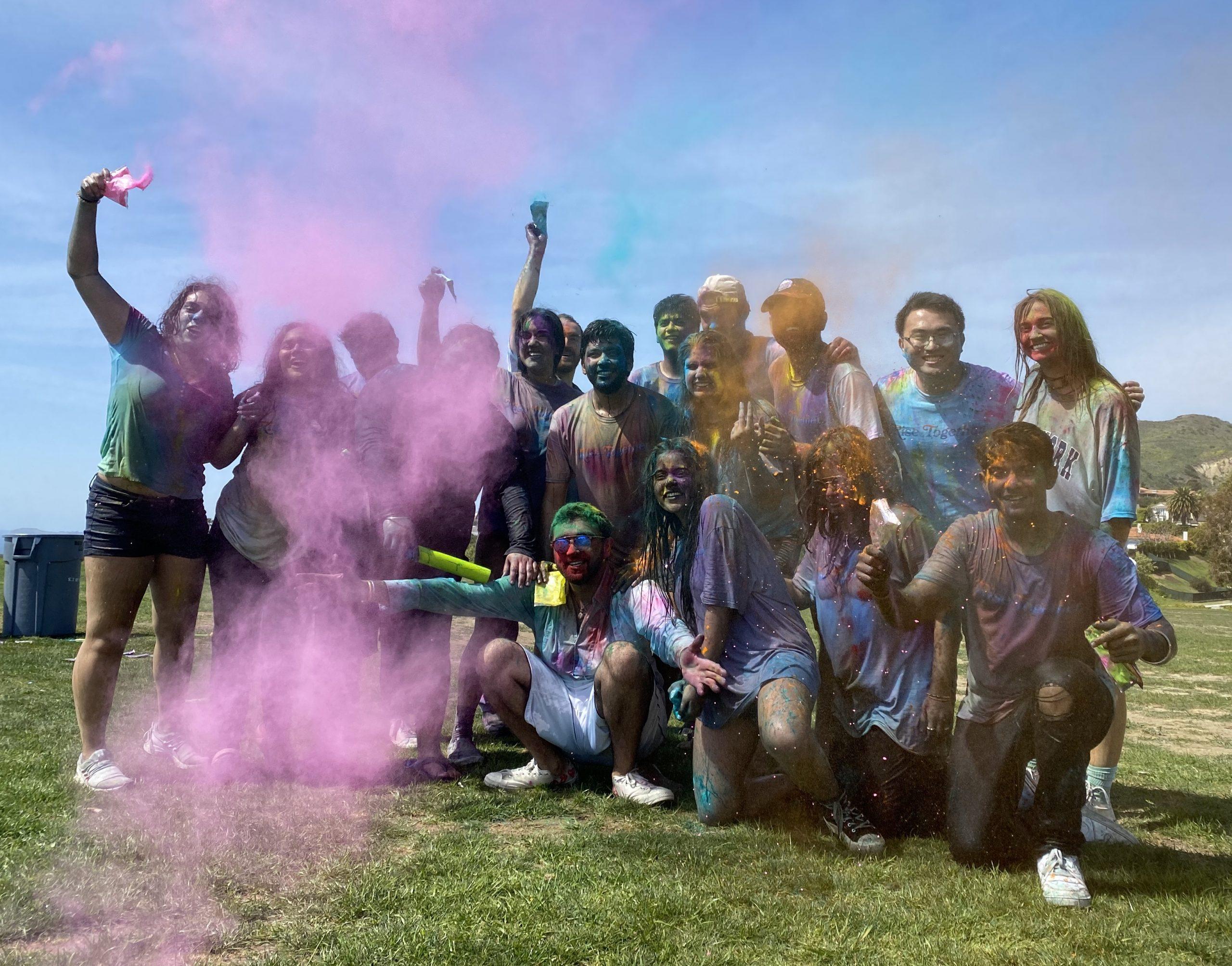 Students in attendance at the ISA Holi Festival on March 13 throw colored powder in the air. Covered head to toe in color and water, students said they proudly embraced the practices of the Holi Festival tradition. Photo courtesy by Christina Buravtsova

The Indian Student Association welcomed the spring season with a splash of color as they celebrated the Holi Festival tradition at Alumni Park on March 13.

With colored powder, water guns and balloons, Indian music and traditional Indian cuisine, ISA brought a taste of home for Indian students at Pepperdine. Additionally, students and faculty of non-Indian descent had a chance to gain a deeper understanding of Indian culture.

“I don’t think necessarily we’re replicating just how grand the celebrations are back in India,” ISA Event Coordinator Harleen Bal said. The fact that we are celebrating it and we’re together — I think it means a lot for people that probably missed their family and friends on that day.”

Holi is a Hindu festival — also known as the festival of colors — that marks the arrival of spring and the end of winter according to Time Magazine. Symbolic of the triumph of good over evil, Hindus have celebrated Holi for centuries on the Indian subcontinent with accounts of the festival dating back to the 4th century CE. This year the official festival took place March 18.

The ISA has 42 club members and began preparing for the event during winter break, said Sahej Bhasin, ISA Vice President and Advertising Director for the Graphic. It was crucial for ISA to start planning early to ensure the on-campus celebration was reflective of the real Holi festival.

“It really takes a village to make a big event like this come to fruition,” Bhasin said. “We’re all there for each other to make sure that this event is not only great for the campus, but also for our organization for those students who really are homesick.”

Traditionally on the day of Holi, festival-goers wear white, throw colored powder and splash water at one another, Bhasin said. ISA passed out a free RISE white t-shirt to the 40 plus attendees along with packs of colored powder and water guns to participate in the tradition.

“I’m looking forward to the colors and getting messy,” Bhasin said before the event. “No limitations and just go into the spring season with absolutely a clean, fresh, colorful slate.”

By the end of the event, students were covered head to toe with color and water — bringing the spirit of the holiday to life at Pepperdine.

With music being another integral part of the Holi tradition, ISA booked Indian DJ Surinder. Bal said Indian music is her favorite to listen to and said she was excited to share her culture with other Pepperdine students.

“I’m excited to dance with all of my Indian friends and non-Indian friends at the event,” Bal said. “It really makes you feel represented on campus to have your music playing in the middle of campus and for it to be celebrated.”

ISA Creative Director Rebekah Daniel said putting on these events at Pepperdine helps International students and students of Indian descent engage with the Pepperdine community while staying in touch with their culture.

“We have a lot of international students who are from India itself,” Daniel said. “It’s a really good way for them to continue to feel connected with their culture, while also participating in activities at Pepperdine.”

Given the racial make-up of Pepperdine, Chhabra and Bhasin said that it can be challenging to promote South Asian culture. However, events like the Holi celebration allow ISA to spread awareness and amplify Indian students’ voices.

“Pepperdine being, you know, a Christian University with a predominately white campus, it really becomes difficult to be able to represent our culture,” Bhasin said. “This is a fun way to do it to help show others that this is what our culture is all about and this is how fun and inviting it is.”

Bal and Bhasin said that in today’s globalized society, college students should educate themselves on different cultures to have a greater cultural awareness. Therefore, the event was open to all students, regardless of their descent.

Attending the Holi celebration at Pepperdine allowed students to gain a cultural sense of the holidays and traditions of India, Daniel said. With this knowledge, students will be better equipped to visit the country in the future and engage in discussion about it.

Daniel said one of the key aspects of culture that the Holi celebration exposed students to was the unique way people from South Asia interact with one another through the engaging color fights and dancing.

ISA club members said that they were grateful to have an opportunity to educate students and faculty about their culture and cultivate a greater cultural appreciation within the Pepperdine community.