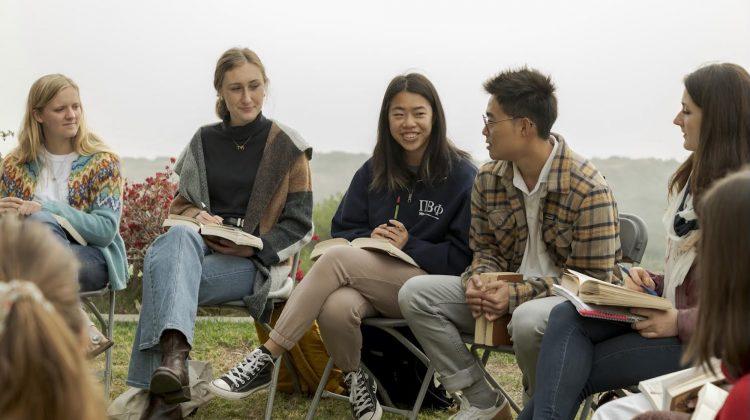 Photo courtesy of Josh Leow | Sophomore Annie and senior Josh Leow, siblings from Memphis, Tennessee, joyfully engaged in conversation during Humanities Professor Michael Gose’s Great Books class. They said the class is their favorite because it allows for open discussion.

From the beginning of life to death and every moment in between, people’s lives are a string of relationships and connections.

Within every relationship — couples, friendships, families, enemies — there are good and bad moments that have the power to define and develop the relationship. Relationship IQ Director Kelly Haer said life is lived in little moments like holding a car door for someone, asking someone how their day is going or responding with kindness instead of blame in a moment of tension.

“Relationships are made up of a million different small moments that create an overarching tone, feel or vibe in the relationship of care, love, consideration, harmony or not,” Haer said.

Haer has been the director of the Relationship IQ program at Pepperdine since 2017 and recently became the executive director for the Boone Center for the Family in 2021. Haer said she has a passion for guiding students through their relationships.

The three most important elements of all relationships are being available, responsive and engaged with each other, Haer said, something she learned from Psychologist Sue Johnson.

“Patterns of asking the person how they’re doing or asking questions out of curiosity to get to know them and really listening and really caring about their response,” Haer said. “Being interested in the response can make a big difference in defining the overall quality or tone of the relationship.”

Annie Leow, sophomore Economics major, and Josh Leow, senior Religion major, both on the premed track, said they would describe their sibling relationship as incredibly strong, but only as of recently. Being only two years apart, they said they would bicker about things when they were younger, like who got somewhere first or who received what.

The first moment that their relationship grew closer was when they took a trip to Taiwan without their parents in Summer 2018. Annie Leow said they learned how to look after each other, which sparked the bond they have now.

Being responsible for each other was the first step. Josh Leow said attending college together has helped them mature and appreciate spending time with each other more.

“I just try to pass along all my experiences and lessons that I’ve learned so that she doesn’t have to make the same mistakes I did,” Josh Leow said. “I provide support.”

Spending time and attending classes together has been a highlight of both their careers at Pepperdine.

One particular class they said they’ve enjoyed taking together is Great Books with Humanities Professor Michael Gose. Annie Leow said she and her brother enjoy the way the class allows for open discussion.

“The class that we’re in is very discussion-based,” Annie Leow said. “So we’re kind of able to bring in our childhoods and how we grew up together.”

The most important moments in their relationship, they said, are the times they can just be together.

“Last semester, I was supposed to go abroad to Heidelberg,” Annie Leow said. “And then part of the reason I didn’t go abroad was so that we’d have another semester on campus, and it’s been super fun. I don’t regret it at all.”

Junior Journalism major Kylie Girl Guieb said whenever she thinks of moments in friendships, she prefers to think of the positive times.

“I think that moments in a relationship, the most memorable ones, are the times that you are enjoying yourself and that you do have a good connection and you establish a good feeling with it,” Guieb said.

However, Guieb said in her experience, not all friendships are healthy. Guieb faced a broken friendship at the beginning of her junior year when a three-year-long friendship began to fall apart.

Guieb said she had seen problems in their relationship through the years but the tipping point was when she felt like her friend disrespected her family.

“When it comes to the things that I value, and if people disrespect it, then that’s just automatically like a red flag,” Guieb said. “When it comes to my family, I feel like I have such big family values and the one thing that I preach all the time is ‘family, family, family,’ and like if you know that I’m preaching it so much then why are you going to blatantly just disrespect it?”

Although that friendship ended, Guieb said it made her relationship with others stronger — specifically her friendship with junior Psychology major Lilly Stotz.

“Lilly, for one, has the same family values that I do, so I think that was also a big factor to me when befriending her and also seeing her as my best friend now,” Guieb said. “So yeah, I think it’s just family values because I think that eventually, everybody can have a certain person, even if they are not related, who can become your family. And that’s the way that my family sees Lilly as of right now.”

Guieb said the contrast between how Stotz treats her and the way her previous friend treated her is huge. She described her experience as eye-opening.

“I realized that when I thought this other person was there for me, she wasn’t, and she wasn’t intentional with anything she did,” Guieb said. “She didn’t think about the aftermath of what was going to happen after she said or did anything. So it made me realize that Lilly does that and that that’s a true friend.”

In her experience as a therapist, Haer said it is common for moments of personal struggle to grow relationships.

“In moments where someone is in personal pain, they’re being vulnerable,” Haer said. “They’re sharing about their hurt, and the other person moves toward them with care to join them in that moment.”

When Guieb realized she needed to cut ties with her previous friend, Guieb said Stotz was there to offer comfort and support.

Erin Carroll, academic support coordinator for Athletics, and Paul Carroll, associate head coach for the men’s volleyball team, have been together for 14 years.

“We kept finding ourselves at the cafeteria at the same time — the good ol’ Caf,” Erin Carroll said.

As college students, they said they didn’t have much money, so most of their “dates” were grabbing lunch in the Caf. Their first official date was a night out for sushi.

“I remember taking you [Erin Carroll] to sushi in Santa Monica, and we ordered the Kobe beef, but I didn’t know what Kobe beef was,” Paul Carroll said. “It was like $40, and so I thought it was gonna be huge for 40 bucks but then it was like these two tiny pieces of meat, and I was like ‘Oh, what is this?’ But that was the first memorable, fancy date we went on.”

Paul and Erin Carroll married in 2014 and have two children — a 4-year-old, Flynn, and a 6-year-old, Nolan. The couple is expecting their third child in May. Erin Carroll said having kids can make going out for date nights difficult, so they often find little moments alone together. Their favorite thing is to eat lunch together on the tables outside of Firestone Fieldhouse.

In addition to spending time together, they both said they value respect and communication in their relationship.

“I feel really respected in the relationship, always,” Erin Carroll said. “And I always respect his opinion about anything else, and I respect everything he brings to the table intellect-wise.”

Haer compares the moments of relationships to images and videos.

“Stop and ask yourself, ‘Is this a picture or a video?’ In other words, you know, a picture would represent one moment, and a video would represent many moments over and over again,” Haer said. “And so, lots of moments, lots of pictures, create the video or the movie of the relationship — they create the story.”

Haer said every moment strung together has the power to define a relationship.

“The story is not defined by one still shot or one screen, but moments become the many, many screens that create the movie of the relationship that really tells the story,” Haer said.