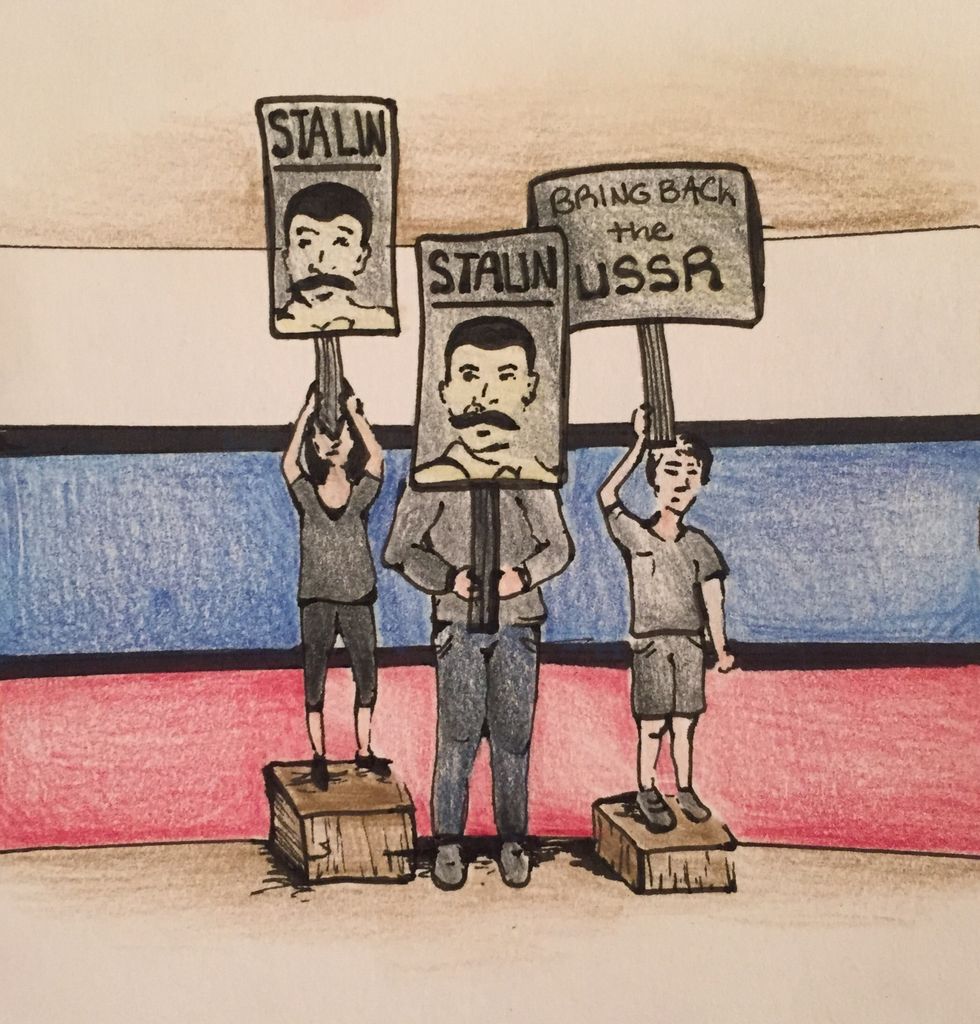 Here in the Western Hemisphere, that would seem ridiculous and an almost impossible perspective after everything the citizens of the USSR went through during Stalin’s regime. However, scarily enough, there has been a strong mood of Soviet nostalgia recently in Donetsk, a rebel capital in eastern Ukraine. As described in the Yahoo News Oct. 19, 2015 article by Nicolas Miletitch, “Stalin portraits, Soviet nostalgia in Ukraine’s rebel regions,” three portraits of Stalin are on display in the center of Donetsk, as rebels fight how Kiev’s pro-Western government recently passed many laws making it illegal to display any Soviet symbols.

Why would Ukrainians fight a democracy that saved them from a Stalin-led USSR regime? Especially since, as estimated in the book, “Unnatural Deaths in the U.S.S.R: 1928-1954,” by I.G. Dyadkin, USSR citizens “suffered 56 to 62 million ‘unnatural deaths’ during that period, with 34 to 49 million directly linked to Stalin,” and Ukrainians alone suffered five million deaths in the 1930s due to famine caused by Stalin’s decision to close borders with countries allied with the United States, Britain and Western powers.

In my opinion, the main answer is due to the current instability in Ukraine, creating a situation where people are searching for a quick solution, which in this case is a Soviet utopian past. The instability in Ukraine is mainly due to, as said in the BBC Feb. 12, 2015 article “What’s happening in Ukraine? Newsround guide”, the fights and protests in east Ukraine. Many want Ukraine to be a part of Russia, resulting in “at least 5,486 people, including 59 children, killed and nearly 13,000 wounded in the conflict so far.” The April 17, 2014 CNBC article “Who are the separatist rebels destabilizing Ukraine?” by Katrina Bishop further explains how eastern Ukrainians have a strong urge to join their neighbor Russia with whom they share more culture, language and economic ties in comparison to the Ukraine country they were forced to be a part of after the defeat of the USSR.

To rebel against Ukraine and make their separatist statement, most eastern Ukrainians are turning to Stalin and the USSR’s past methods by following in the same sinister steps. Miletitch’s article describes how these rebels have done numerous things ranging from restoring a Lenin statue to its pedestal, conquering territories and renaming them “people’s republics,” reviving a Soviet-era youth group and even renaming their security organ the same as Stalin’s secret police, the Ministry of State Security (MGB). Donetsk rebel authorities have even gone as far as taking down a monument in remembrance to the millions of victims that died in the 1930s famine in Ukraine.

Although the image of hundreds of people wanting to join a Stalin-influenced rebel movement is unimaginable to many, the only way it is possible and understandable is because of the power the feeling of displacement can have in people. Numerous times in history, hundreds of people have been displaced after wars and conflicts, leaving them abandoned, confused and frustrated with the foreign country they are stuck in. These rebels so desire to leave Ukraine that they become blinded and manipulated by Russia into forgetting a dark past and instead believing that the only way to becoming independent is through a Stalin-influenced force.

What is the answer to all of this? In my opinion, our world cannot just stand by and watch as rebels influence thousands to follow in Stalin’s steps only because they feel it is the quickest solution to getting what they want and joining Russia. Our world, specifically the Western powers and European Union countries, must realize that if they wait too long, this revival of ideology may turn into a domino effect, re-awakening a horribly sinister time.

This increase in USSR nostalgia may very likely cause even more future chaos in the region and in our world. World powers must remember our past, urgently realize the potential danger and call for intervention against this Stalin ideology. Stated more simply, it is their responsibility to remember, as said by Edmund Burke, that “those who don’t know history are doomed to repeat it,” exactly as these rebels have begun to revive and repeat the past.