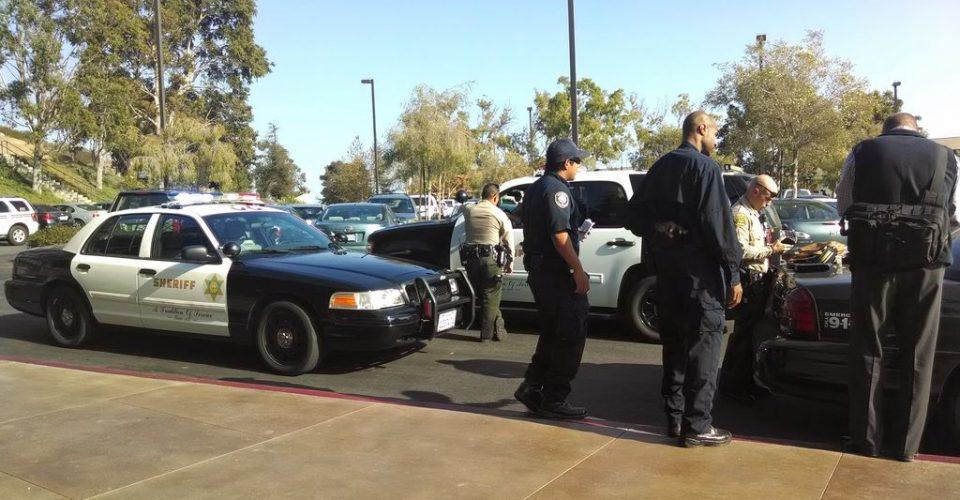 Los Angeles County Sheriff’s Department officers arrested a suspect in Joslyn Plaza at approximately 2 p.m. on Monday. According to Officer Jesse Berg, Aaron Lewis “was not a student” and was carrying a knife. Lewis was immediately taken to the Malibu/Lost Hills Sheriff’s station.

Lewis was described as “in his late 20s or early 30s,” according to University Public Relations officer Tiffany Wright. He was wearing a flannel shirt and dark glasses.

DPS was first alerted after they received a report that Lewis was loitering in the university bookstore near the Waves Café. “Employees saw him walking around and informed their manager the man had been there for a while,” Wright said.

After DPS was called at 1:20 p.m., the LA County Sheriff’s Department was informed of the suspicious activity. Three sheriff’s patrol cars and a van were dispatched to Pepperdine’s campus and arrived around 2 p.m. Lewis was taken into custody after three DPS and four LA County Sheriff’s deputies confronted him in Joslyn Plaza.

“They patted him down… he didn’t resist. It seemed strange there were so many cops and he wasn’t resisting,” said Seaver senior Katie Morris.

Initially, “They took the gentleman into custody because they found a knife on him,” Wright said. While Lewis was being arrested, the contents of a bag he was carrying were emptied on one of the patrol car’s trunks. Officers discovered another knife, clothing and other miscellaneous items.

If convicted, Lewis could face up to a year of prison time.

Find out the new major that Pepperdine recently approved, what purpose Pepperdine's 500-plus acres of undeveloped land serve...
Copyright 2013 Jupiter Premium Magazine Theme
Back to top