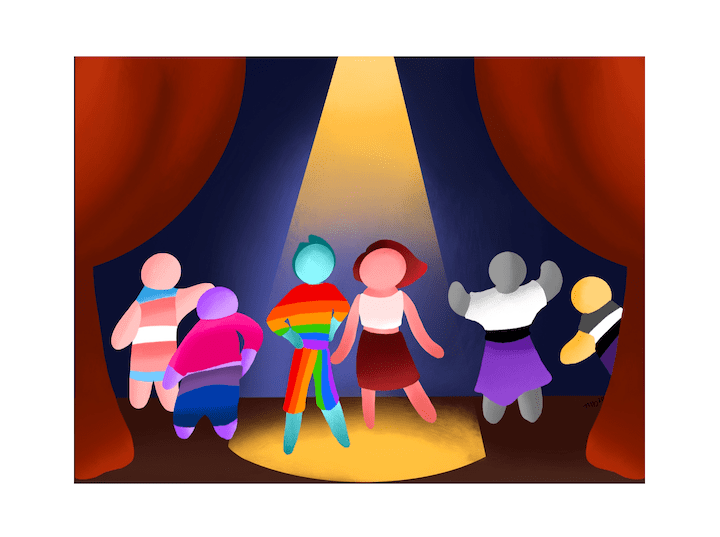 Am I gay? Well, yes, but actually no.

I’m a non-binary asexual, so I’m not gay in the truest sense of the word. However, the word gay has also become an umbrella term for the entire LGBTQ+ community. While it’s not necessarily a bad thing, this says something about the visibility of the letter G from the outside of the community as well as from within.

Frequently, those on the outside look at those who are queer and just see gay; sometimes, it feels like that on the inside of the group, too.

Gay men don’t to have worry about being excluded from queer spaces because gay and queer are considered to be synonymous — to say otherwise would be ridiculous. However, many others who identify as queer don’t have that luxury.

Homonormativity, a term initially used to symbolize “marginalization and displacement experienced within transgender political and cultural activism,” according to Susan Stryker’s “Transgender History: The Roots of Today’s Revolution,” has the ability to take over queer spaces in the same way that heteronormativity pervades the wider culture we live in.

Through this lens, the world is seen in binary ways — men and women, gay and straight. This perspective doesn’t leave much room for those who fall on the spectrum between these polarized opposites.

Same-sex attracted individuals have spoken out against trans* people being included in the community, and though it has lessened since the 20th century, it is still prevalent. Entire subreddits like r/LGBDroptheT are devoted to transphobic rhetoric while still professing to promote equality.

Major Griffin-Gracy, a trans* rights activist who protested at the Stonewall riots, said she frequently sees this exclusion in the LGBTQ+ movement. “I feel like we’ve been pushed to the outside and then prevented from looking in,” she said in an interview with Jessica Stern for Scholar and Feminist Online. “It’s the stares, the noninclusion over decision-making, exclusion from events that would build this movement. It was an inclusive club until we stood up for ourselves, and then it became gay white men running stuff.”

One group that is still being excluded in some queer circles is asexuals. Asexuals “are marching for the right to not do anything,” said Dave Savage, a prominent queer activist in the documentary “(A)sexual.” He also implied that being asexual was a choice not to have sex rather than a sexuality, according to HuffPost.

I don’t put these facts on display to say that all gay folx exclude identities that are completely same-sex attracted, but with exclusion and ostracization occurring, it’s important to be aware that lesser-supported sexualities and gender identities may carry these perceptions with them as they enter new queer spaces.

Just as one has to realize their own intersectional privilege during these conversations, we need to be aware of voices in the LGBTQ+ community that have a more difficult time making their way to the public sphere. Together, gay individuals and queer cohorts need to work to create a culture that caters to all the letters under the rainbow flag.