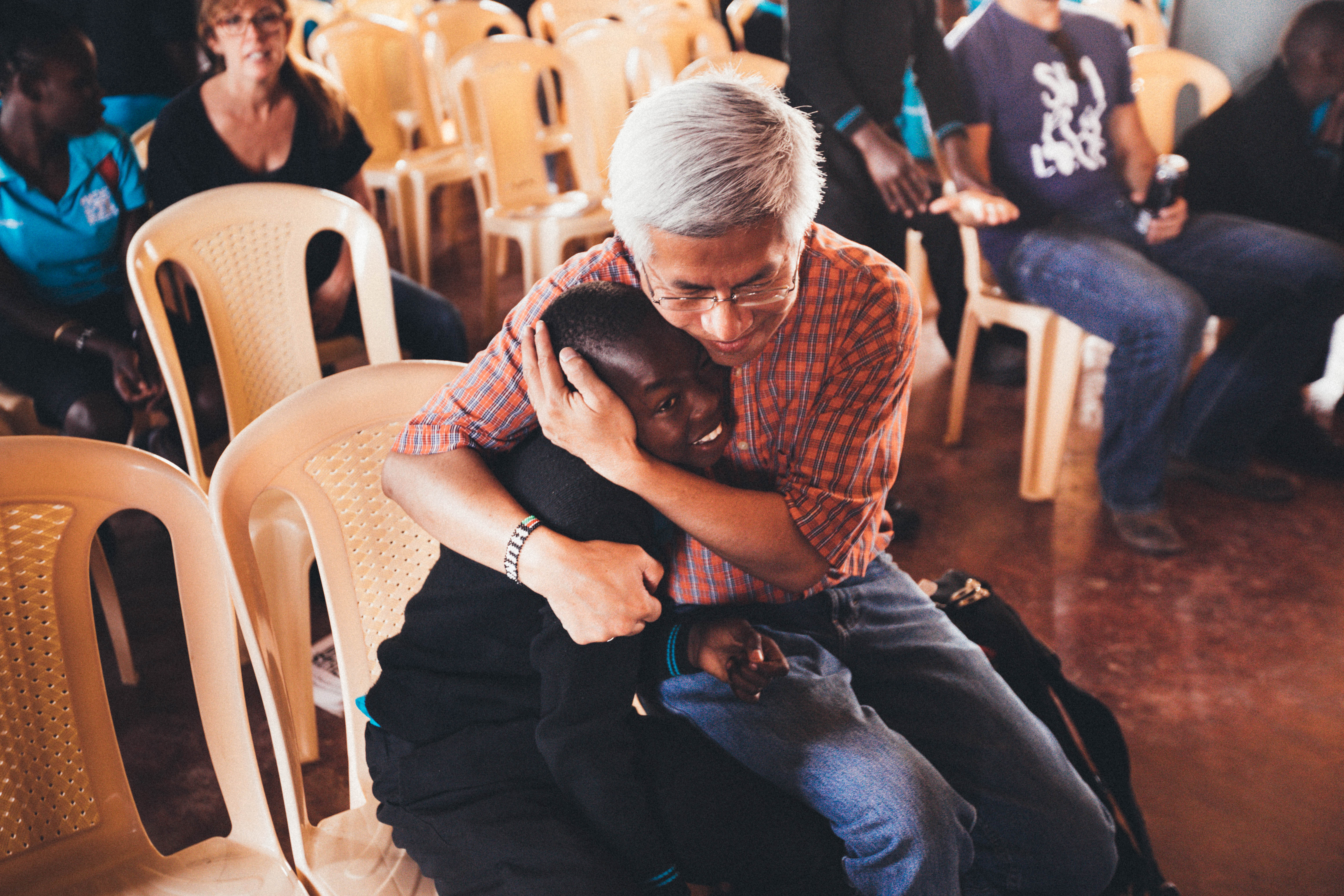 As a child, Hung Le’s favorite game to play was “Coming to America.”

“We used to take these suitcases, and we would pretend we were going to America,” Le said. “That was the Promised Land.”

Within the suitcases, which Le referred to as “war kits,” were family pictures, clothes, a little bit of money and an ID card.

“We knew if the war came to our neighborhood, we would grab our little suitcase, and we would run,” Le said.

In 1975, American forces pulled out of Vietnam.

“We knew it was imminent that the Communist forces were going to take over,” Le said. “In those last days, a lot of people were trying to get out.”

Among those fleeing from Vietnam was Le’s cousin, who worked for the American Embassy. His cousin had an extra ticket to the United States because he had a son who died at birth. He never declared the death.

“I remember my parents selling almost everything they had and gave that money to my cousin to buy the ticket,” Le said.

One afternoon, Le was trying to take a nap when his mother came in and laid down beside him.

“She whispered to me, ‘Hung, you’re going to America.'”

At 11-years-old, tears began to stream down Le’s face.

Le had an older brother, two older sisters, two younger brothers and one younger sister. When his older brother died in a drowning accident, Le became the oldest son.

“I was thrust into being the first-born son,” he said. “I had to continue the family name.”

When the day came for Le to leave Vietnam, his parents gave him his war kit — the one he pretended to use when he played “Coming to America.”

“Think of the irony in that moment,” Le said. “My dream all my life was to go to America and now I could go.”

Besides the essential items in the suitcase, there was also a red felt cloth his family used for holidays, his father’s gold watch and a can of Charms candy.

“My family was sending all of their hopes and dreams with me by giving me the most precious things we owned,” Le said.

With his cousin, Le left Vietnam and his family behind.

“I knew I was no longer an 11-year-old child,” he said. “I now had a mission, and my goal was to reunite with my family.”

Le spent his first night in America with a family friend he called Mrs. Kee. She was a Vietnamese woman who married an American GI. She lived in Seattle.

That night, Le found out his father broke off his engagement with Mrs. Kee to be with Le’s mother. He also learned his cousin promised Mrs. Kee he would bring her daughter from Vietnam to America.

Instead, his cousin brought Le since his parents paid for the ticket.

“She had every right to reject me and ask me to leave,” Le said. “But she dispensed incredible grace and took me in.”

After dinner on the first night, Mrs. Kee told Le to go to his room. Growing up with six siblings, Le never had his own room.

“It was a small, carpeted room and had shelves and a place to hang clothes,” Le said. “It was this amazing room.”

Le curled up on the floor until Mrs. Kee came in and found him.

“What are you doing in here?” she asked. “This is the closet. This is where you put your clothes.”

Embarrassed, Le got up and Mrs. Kee showed him to his actual room. There was a bed, blanket and pillow. She also gave him a bowl of warm rice.

“That first night was a taste of heaven,” Le said. “It was raining outside, and I remember how cozy I felt. To this day, every time it rains I think back to that night.”

But Le did not stay with Mrs. Kee for long. He ended up going to live with his cousin.

Le’s cousin was abusive and whipped Le with a belt on a weekly basis.

“I endured it and every time he would beat me I would close my eyes and just pray that somehow this would lead to my family coming over.”

When a family friend, Mrs. Beard, noticed the bruises on Le’s arms, he never returned to his cousin.

“She told my cousin, ‘Hung is not coming back,’ and I was rescued,” Le said.

The Beard family became Le’s caretakers, and they wanted to adopt him. However, Le knew the adoption would cause his last name to change.

“My main purpose for coming here was to continue my family name,” Le said. “I told them I had to keep my name.”

Around this time, Le got a letter from home. He found out his father was arrested and placed in a re-education camp. His father refused to join the Communist Party and renounce his Catholic faith.

“My mom had to raise our family by herself, and the government seized our home,” Le said.

His father remained in camp for six years.

By his sophomore year of high school, Le went to live with another foster family. He still communicated with his younger sister through handwritten letters.

“She knew of all my struggles,” he said.

Le received news that his sister escaped from Vietnam.

“I remember her saying, ‘I’m coming to you, and we’ll live together,'” he said.

She died on the way to America.

“I endured a lot at this point, and I was always able to find comfort in God,” Le said. “The morning after I found out she was gone, God was dead.”

Le said it took him a long time to come to terms with God. One day, a close friend of Le’s told him God does not work on Le’s timeline, but God works on his own timeline.

“It was like someone hit me over the head with a brick,” Le said. “It was the first time in my life I felt I could be angry with God, and he would still love me.”

Through his sister’s death, Le embraced his relationship with God.

“Looking back, it was one of the most abundant moments in my life,” Le said. “It was then that I realized that God loves me, period. His love for me was not dependent on my performance or on my goodness. His love for me depended on the fact that he is God, and I am his child.”

With a growing relationship with God, Le started to apply to colleges.

“There was only one criterion,” he said. “I did not want to go to school in California.”

However, Le said his high school counselor had a different plan for him. She told Le about Pepperdine University and said he should apply.

“The more I found out about Pepperdine, the more I loved it,” he said. “I got accepted and four years later I graduated from Pepperdine.”

At Pepperdine, Le said his relationship with God strengthened even more.

“I came to Pepperdine looking for a really good education,” Le said. “What God gave me was a great education and a family. He gave me a new life and a new relationship with him.”

In his sophomore year, Le studied abroad in Heidelberg, Germany where he met his future wife, Corrine.

“I only remember talking to her once when we were abroad,” Le said with a laugh.

The two grew closer when they returned to Malibu their junior year.

“She didn’t like to cook; I loved to cook, but I hated eating by myself,” he said. “So every evening, I would call her up and invite her over for dinner, and we became the best of friends.”

After long consideration, Le and his wife decided to become more than friends.

“I’m really glad we risked it,” he said.

About two years after Le graduated in 1987, he married his wife in Stauffer Chapel.

“We owe so much of what we have to Pepperdine,” Le said. “I proposed to Corrine at the foot of the cross, we got married in the chapel, we had our reception at the Brock House, we raised our four sons on the Pepperdine campus.”

Le’s oldest son, Zach, graduated from Pepperdine last year. His second son, Ben, is studying abroad in Buenos Aires. Jamie is a freshman, and Le said his family prays their youngest, Garrett, who is a junior in high school, will attend Pepperdine.

“This is holy ground for us,” Le said. “This is much more than just a university, it’s truly holy ground … For us, this is where God met us. That’s our consistent prayer for every student who comes on this campus. We pray this becomes holy ground for each and every one.”

Le is now the Associate Vice President and University registrar at Pepperdine.

“We live in gratitude,” he said. “We don’t take this gift lightly.”

Before Le finally returned to Pepperdine, he lived in New York and worked for Andersen Consulting.

“I was still working to get my entire family over,” Le said. “I got to meet with a Congressman in New York and tell him my story. He told me, ‘Hung, it’s either going to take a miracle of God or an act of Congress for your family to come to America.'”

Le continued to pray for a miracle.

While living in New York, Le received word that his two brothers escaped from Vietnam.

“You can only imagine the terror I felt in my heart because it took me back to when my sister tried to escape,” he said.

In 1990, Le successfully reunited with his brothers in the United States.

A few months later, Congress proposed a program that allowed people detained in re-education camps to immigrate to America.

“The Congressman I spoke to said, ‘I think your father qualifies,'” Le said.

In order to be eligible, candidates had to be detained for at least five years and have a sponsor in America.

“I remember just shaking,” Le said. “Here’s an act of Congress and a miracle of God rolled into one, and it was my dad’s stubborn faith that kept him in the camp. It was that faith that allowed him and my family to come over to America.”

“For 16 years I lived without my family,” Le said. “I would dream about the day when I would get to see them again.”

Le’s dream was similar to his favorite scripture — the moment when Mary arrived at Jesus’ tomb.

“She gets there, and the tomb is empty,” he said. “Her life is shattered. She’s in the darkest part of her life to the point where she doesn’t recognize Jesus — until he calls her name.”

Pepperdine sent out a news release the day before Le’s family arrived in America. Local news stations picked up the story.

“The next day I get to LAX, and the place is packed with the press,” he said. “I had no idea it was for us until I heard, ‘He’s here!’ And people ran toward me.”

Le, his brothers and the press waited in the terminal.

“I felt so bad for these camera crews and reporters,” Le said.

Eventually, one of Le’s brothers saw a few people coming toward them.

Le could not see beyond the swarm of cameras, microphones and bodies.

“Suddenly, I heard my name being yelled out,” Le said.

“It was my mother’s voice.”

He almost fell to the ground.

“There’s nothing sweeter than the sound of your name being called by your mother,” Le said. “I just caught a glimpse of what Mary must’ve felt like when she heard Jesus calling her name.”