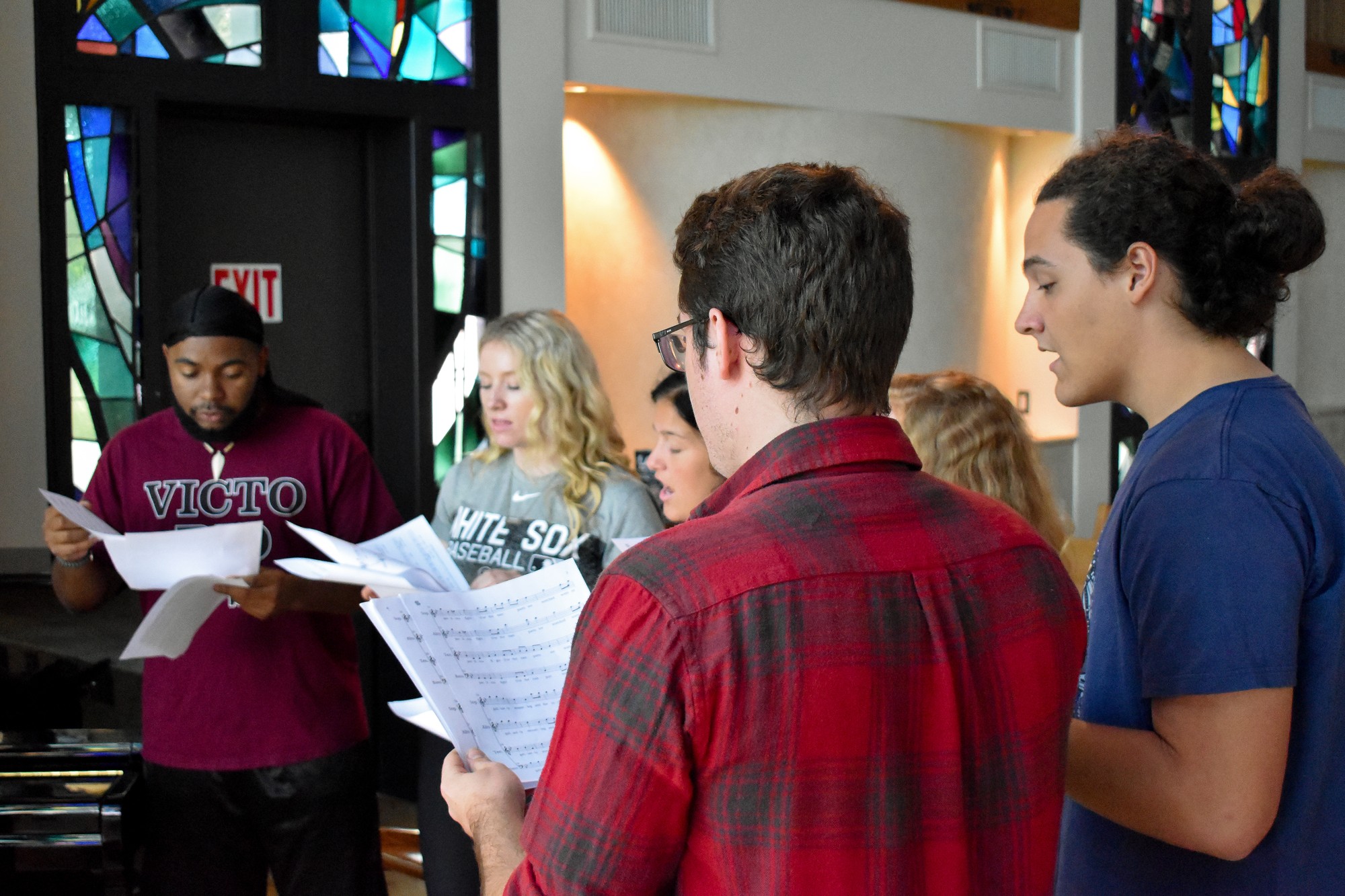 The first thing that comes to mind when one thinks of the Church of Christ may be the melodic harmonizing of voices and echoing absence of strings or percussion. But what about the cerebral turning of a biblical page? The shine of the chalice during the weekly celebration of Holy Communion? Acapella, or non-instrumental music, often takes the spotlight when it comes to Churches of Christ. However, there are many more elements to explore in order to truly understand this faith’s worship tradition.

The Church of Christ is a subdivision of Protestant Christianity that began with a spiritual reformation in the 1800s called the Restoration or Stone-Campbell Movement after founders Barton Stone and Alexander Campbell. From a scholarly focus on the Bible to an emphasis on Communion, the Church of Christ has a rich history of developing and shifting conventions that define worship. 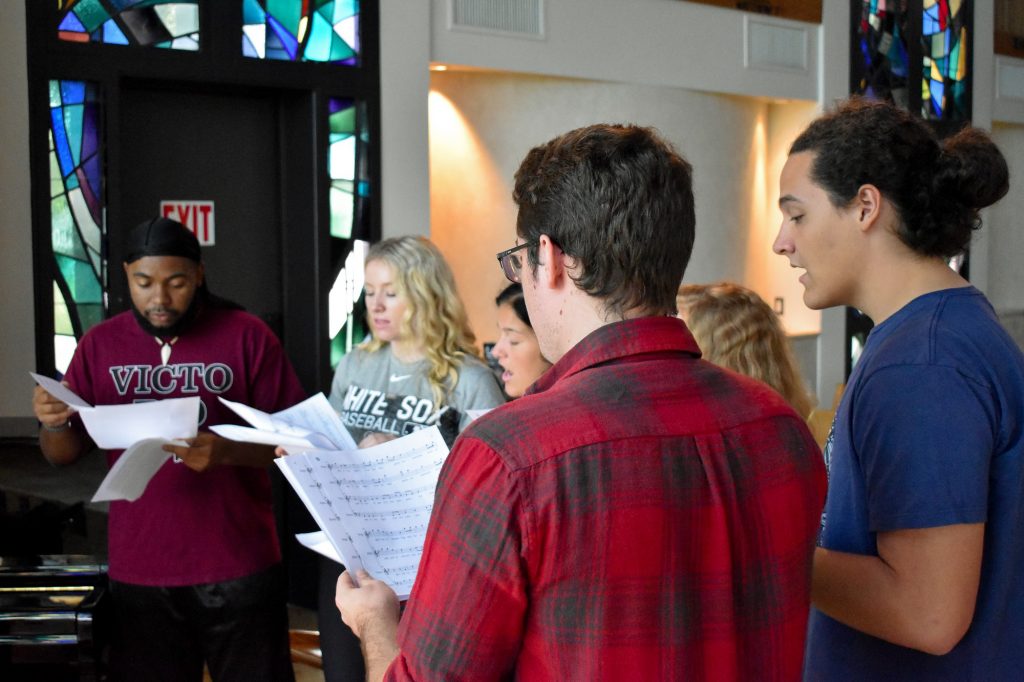 The Church of Christ traditionally engages in acapella-style worship. Acapella is a term describing the absence of instruments and the use of only human voice to create melody. This tradition initially began because of financial realities, said David Baird, historian and dean emeritus of Seaver College.

“In post-Civil War times, some Northern groups of churches began incorporating mechanical or instrumental music into their services,” Baird said. “After the war, many Southern churches didn’t have the resources to do this and became critical of churches that spent money on instruments such as organs.”

University Chaplain Sara Barton said lack of funds was just one historical motivation for the acapella tradition. Early Church of Christ members also had enthusiasm for simplicity and a desire to include the entire congregation, she said.

“Part of the concern was that, if there was a choir or musicians, some people wouldn’t be able to participate,” Barton said.

Joi Carr, a singer, actress and professor of English and film studies at Pepperdine, said she grew up in the Church of Christ tradition using her talent for singing. For her, acapella worship enables a connection to God in a way instruments cannot.

“I’m a lyrical person,” Carr said. “Words are of primary importance to me, so I feel that acapella worship facilitates that connection more for me.”

Carr said she has experienced differences in Church of Christ acapella worship throughout different regions of the United States. She said that while the South has a lot of “lush harmony,” California churches have an emphasis on “melody-driven” songs with components such as rounds and repetition.

Baird said he can remember a time several decades ago when acapella worship was “absolutely necessary” to be in accordance with proper Church of Christ practice.

Nowadays, although acapella music continues to be a notable tradition in Churches of Christ as a whole, it is mostly a matter of preference rather than moral or theological importance, Barton said.

“Some people are legalistic about [acapella music] and feel that acapella worship is the only right way to worship,” Barton said. “However, I myself actually don’t know that many people that feel very strongly about instrumental worship being inherently wrong anymore.”

As chaplain, Barton said she emphasizes the importance of “blended” worship, or the combination of acapella and instrumental music. Many worship opportunities at Pepperdine, including the Faculty and Staff Advent Service, Wednesday Morning Chapel and the Good Friday Service, display this style of worship.

“There is a sense here on campus that if the church has an instrumental service, it will be filled by more students,” Baird said. “The greatest influence to include instruments is an assumption that it will be more relevant to the times, more current and contemporary, and as a consequence, that more students will join us.”

Sophomore Mary Elizabeth Salley noticed a difference between acapella conservatism at Pepperdine and her childhood church in Charleston, South Carolina. She described her home church’s approach to acapella as more “strict and conservative” compared to practices at Pepperdine.

“I wasn’t exposed to instruments in worship growing up,” Salley said. “My family was super open to it but it was a big deal in church that you didn’t use instruments.”

Although Salley grew up in the Church of Christ tradition and continues to attend the UCC every Sunday, she said her preference for acapella music slightly diminished when she came to college.

“For me, acapella music feels more like ‘church.’ I still really like acapella worship … I love hearing the harmonies and I like how everyone in the church has a part to play,” Salley said. “But for my own spiritual growth, I enjoy instrumental music and how it allows me to put my hands out and focus inwardly.”

Although the acapella worship tradition is highly discussed, Barton said other more deeply rooted customs are more definitional when it comes to worship for the Church of Christ faith.

“I have been to Churches of Christ that have instruments,” Barton said. “But I’ve never been to a Church of Christ that didn’t have Communion in the service.” 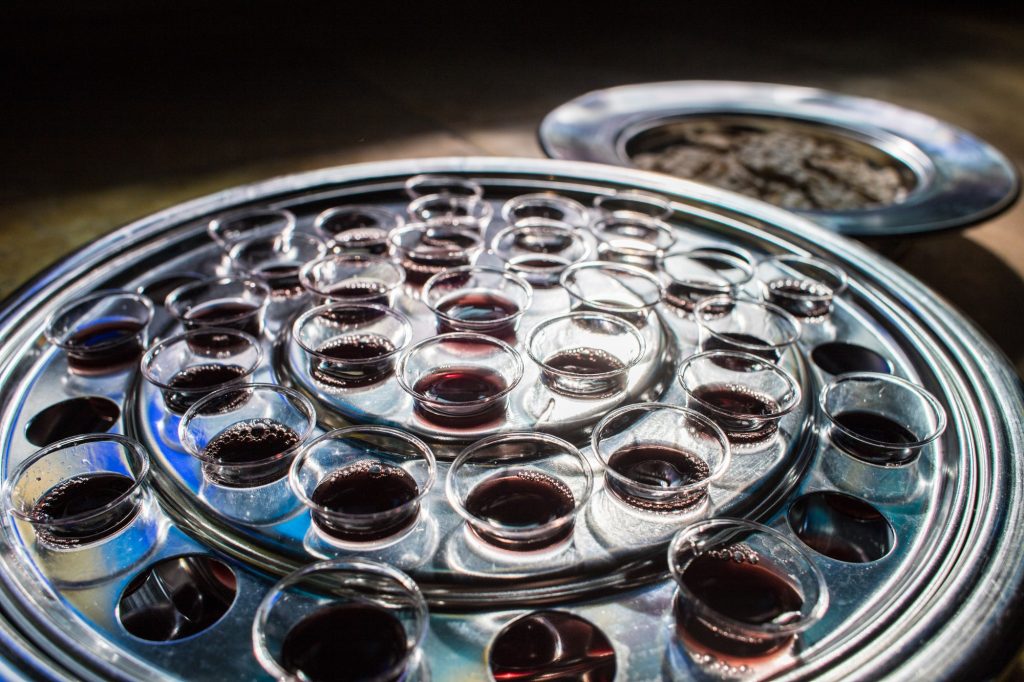 Salley and Baird also emphasized the importance of Communion. They affirmed that a service is never held without it and that this tradition stems from a Church of Christ tendency to interpret the Bible literally.

In fact, most of the Church of Christ worship rituals are quite Scripture-focused. Think biblical research and intellectual sermons. Barton emphasized that every member is highly encouraged to study the Bible individually. An example of the importance of the word of God can be seen in Pepperdine’s Stauffer Chapel. A depiction of the Bible takes the center of the decorative, stained-glass windows.

Baird said there is no central creed or hierarchy that unites the Churches of Christ. Rather, practitioners derive their doctrine solely from individual analysis and detailed attention to the Bible. He described it as “speaking where the Bible speaks and remaining silent where it does not speak.”

For example, in the past, there was dissension over whether it was acceptable for multiple cups to be used during Communion. Baird explained that some Church of Christ goers resisted this idea and favored a single chalice. If the Bible only mentioned one cup in the passage, they would only use one cup too. Baird said this particular tradition has noticeably loosened over time due to fear of communicable diseases.

Opposition in certain congregations against children’s “Sunday School” is another demonstration of Church of Christ resistance to structures not specifically laid out in Scripture, Baird said.

Because Church of Christ members focus on scriptural study, Barton said it would be accurate to describe them as an “intellectual” and “rational” bunch – definitely not the group to emphasize spiritual emotion or mysticism.

“That’s probably why we have so many schools and universities,” Barton said. “Study is important to us. We seek to encounter God through the Bible.”

Church of Christ worship entails a history of tension between strict reliance on Scripture versus movement to adapt with the Modern era. Whether that looks like dropping single chalice guidelines or experimenting with instrumental music, Churches of Christ everywhere are seeking to strike this balance.