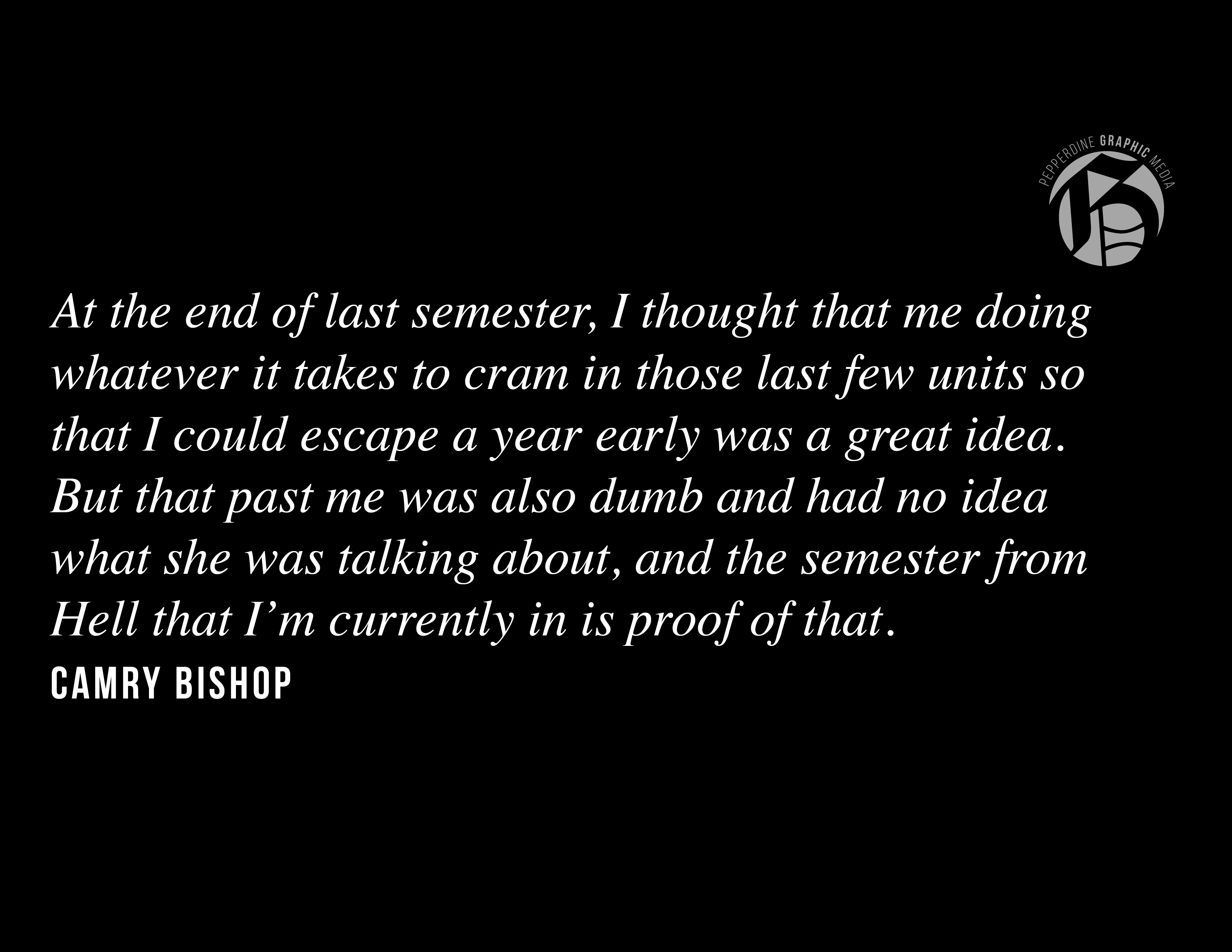 Senior year of college is supposed to be stressful, but in a fun, best-days-of-your-life kind of way — not in the will-willingly-throw-self-in front-of-a-moving-car kind of way. Since I have completely overexerted myself by being one of those overachievers — the ones that I complain about all the time — in order to graduate from college early, my final year as an undergrad is more like the latter.

Coming into college with a semester’s worth of units I thought “Well, why wouldn’t I try to graduate early?” But instead of just settling with the semester that I already had, I decided to shoot for a year and find a way to squeeze that other semester’s worth of work in somehow. Little did I know that present me would despise past me for this decision.

At the time I thought future me would love and appreciate past me for being done with school after only three years because past me knew how much all me’s hate school. And while naïve, freshman me was 100 percent correct, she didn’t factor in the most important point: My desire to be lazy is stronger than my desire to be done with school. While I’d like to blame everything on freshman me, I can’t even do that.

At the end of last semester, I thought that me doing whatever it takes to cram in those last few units so that I could escape a year early was a great idea. But that past me was also dumb and had no idea what she was talking about, and the semester from Hell that I’m currently in is proof of that.

I’d like to reiterate that this is all my fault. Pepperdine may have some dumb policies when it comes to AP credits, but, overall, I have no one to blame but myself. This summer, in my quest to get out of Pepperdine as fast as I possibly could, I completed eight units abroad, officially giving me senior status. I had also been advised to fulfill my English requirement in an online BYU course, and so, like anyone with the dream to graduate early but not the time to do it, I registered for the course.

That was six months ago. Have I completed even one assignment for it? Well, that’s exactly all that I’ve done — just one assignment. Being told you have an entire year to complete something is not a great motivator to do it in a timely manner. I try to defend myself by saying that I was abroad and already taking a class so it made it hard for me to work on this English one. However, I know that this is completely false because if I found time to watch the seven seasons of “RuPaul’s Drag Race” that Italian Netflix had available, then I definitely could’ve found time to write a few short essays.

Once summer was over in a blink of an eye, I figured that I could just add this course to a list of other things that I had on my plate this semester. In the famous word of Destiny’s Child’s song, “Question”: Why am I so dumb? Is this the quote from the song? If so, it should be in quotes. Now, here I am trying to balance my total of 22 units, my job and my extracurricular that takes up eight hours a week and stresses me out like no other. While it may be wrong to compare my life to those of abused orphans, those kids in “Annie” had it right when they said “It’s a hard knock life.”