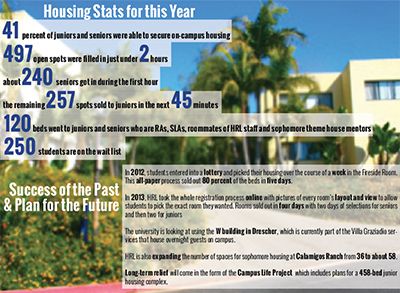 After last week’s Housing Selection Day, only 41 percent of juniors and seniors were able to secure on-campus housing.

All 497 open spots were filled within one hour and 45 minutes, according to Associate Dean of Students for Housing and Residence Life Brian Dawson.

“From watching the system as it happened, it appeared that about 240 seniors got in during the first hour and the remaining 257 spots sold to juniors in the second 45 minutes,” Dawson wrote in an email.

There are an additional 250 students on the waiting list. While the number of available beds has not changed from last year, the demand for those beds has, Dawson wrote. “What I attribute this demand to is the rich community here where students are thriving,” Dawson wrote. “Students love the community feeling of residence life here at Pepperdine and all the wonderful programs and opportunities to get involved.”

Demand for on-campus housing has risen each year since HRL offered new discounts for juniors and seniors back in the fall of 2012.

For 2012, students entered into a lottery and picked their housing over the course of a week in the Fireside Room. This all-paper process sold out 80 percent of the beds in five days.

In 2013, HRL took the whole registration process online with pictures of every room’s layout and view to allow students to pick the exact room they wanted. Rooms sold out in four days with two days of selections for seniors and then two for juniors.

This year’s selection period for the fall of 2014 was different yet again. HRL anticipated that demand may be so great that seniors, if given enough time, could take all the housing. As a result, seniors were given only an hour’s head start. According to Dawson, the online process reset the queue and randomized the line for all seniors right at 7 a.m. and then the juniors’ queue opened at 8 a.m. in the same manner to give a truly random chance for all involved.

Sophomore Matthew Jones secured his housing next year in the Lovernich Apartments, but only after he learned that logging into the waiting list portal, at 7:10 a.m., allowed him to register a room by 8 a.m. He said since most students didn’t know there would be a waiting list to sign up into in advance, it wasn’t necessarily a fair procedure.

“Everyone thought the competition between me and the other sophomores began at 8 a.m.,” Jones said. “In reality it was the people who logged on earlier, even though they weren’t supposed to, who got housing.”

For the other rising junior and seniors who did want housing, many were unable to secure a spot on the morning of the online housing selection. Junior Dena Tartt and her two roommates were some of the unlucky ones.

The three women were planning on living in Drescher Apartments, but after reading an email that Housing sent out the night before Housing Day, they found out they couldn’t register until Thursday, March 13, because they didn’t have a group of four. Tartt said that they based the upcoming Housing Day on last year’s, where students could sign up by themselves, with another person or with a group of two.

“They gave us [a little more than] 12 hours’ notice that this was the whole rule,” Tartt said. “It was impossible to find a fourth person, and we ended up not being able to register. Within an hour an half they sold out. We didn’t even get to register on Thursday.”

By the end of the day on Wednesday, Housing sent out an email that the 8 a.m. Housing sign-up was canceled and apologized for any frustration the room selection process may have caused.

“As always, a student’s junior and/or senior years on campus are optional and limited as it pertains to housing options and we have a fair process that is open to all students on a first come basis. Unfortunately we are booked solid,” the Housing Office’s email read.

Now, Tartt and her roommates are scrambling to find an apartment for next year, which they hadn’t talked about until that day.

“It messed up a lot of people. At least for me and the three of us, we have cars and can live off campus if we have to. There are others who can’t. I’m sure if we were all given a heads up, this wouldn’t have been a problem,” Tartt said.

While HRL is limited in its options to accommodate the high student demand, there are several ideas being looked at to help ease the pressure, according to Dawson.

The university is looking at using the W building in Drescher which is currently part of the Villa Graziadio services that house overnight guests on campus.

HRL is also expanding the number of spaces for sophomore housing at Calamigos Ranch from 36 to about 58. Long-term relief will come in the form of the Campus Life Project, which includes plans for a 458-bed junior housing complex.

Space may open up as the entire housing situation for sophomores and incoming students becomes clear. HRL has “held off spaces for all the new students coming to Pepperdine who are required to live on campus,” Dawson wrote. Rising sophomores will sign up for housing on Wednesday at 8 a.m.

“Depending on the number and the gender of those students, we may be able to open up a few more spaces for juniors and seniors to live on campus.”