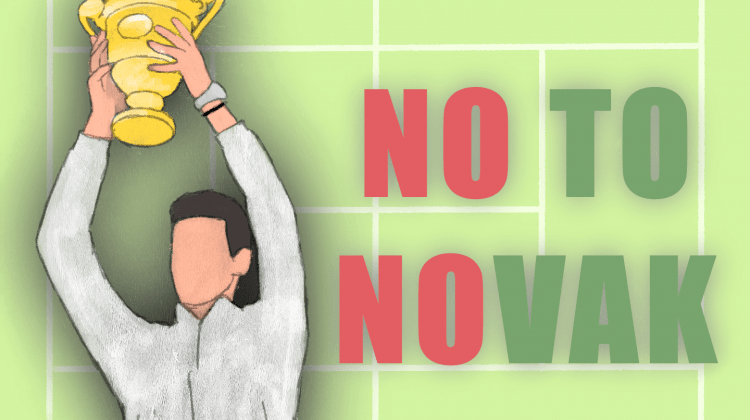 The 2022 Australian Open kicked off the tennis grand slam season in style Jan. 9-30.

But beyond the talent on display over the weekend’s entertaining finals, another name loomed large in my mind over the previous fortnight: Novak Djokovic. The No. 1 Men’s player in the world right now, and quite possibly the greatest to ever play the game.

I’m not afraid to say it: I’m a Novak Djokovic hater. No ‘vak for me, no thank you.

Most recently, Djokovic piqued my frustration when event organizers gave him a medical exemption to play the Australian Open without the vaccine. Djokovic, who has been consistently cagey about his vaccination status and anti-vaccination mandates, originally declined to tell people why he’d received the exemption, before the courts revealed it was because he tested positive for COVID-19 in December.

Already, the double-standard this created peeved me. Australia has had some of the strictest COVID-19 border requirements in the world, and has even barred its own citizens from returning home during the pandemic. To ignore those requirements simply because of Djokovic’s status seemed like a slap in the face to the Australian populace.

But that, of course, was not the end of Djokovic’s saga down under. Djokovic did not play in the Australian Open, because Australia’s immigration minister canceled his visa. Djokovic appealed, but three Federal Court judges denied him entry.

My frustration with the world’s No. 1 goes beyond his recent actions and attitudes toward COVID-19. Djokovic has placed himself on the top of the men’s game for an unprecedented and, admittedly, historic amount of time. But Djokovic is, from what I’ve seen watching him play, a whiner. He is someone who lets his emotions get the best of him on the court, and acts in inappropriate or disrespectful ways as a result.

A prime example of this was the 2020 US Open, when Djokovic injured a line judge by accidentally hitting her with a ball. Though this was clearly grounds for immediate default from the tournament, Djokovic stood on the court pleading his case for around 10 minutes.

His habit for shirt ripping, of which there are countless examples, is emblematic of attitude as well. Take the 2016 US Open semi-finals, for instance, when Djokovic became so frustrated after losing a set to Gael Monfils that he ripped the collar off his shirt. Or look at 2015 Wimbledon, where he did the same after losing a tiebreak to Roger Federer.

Ripping off one’s shirt on the tennis court is, to me, a disrespectful action. I understand and appreciate that emotions are part of sports, and I think it’s understandable that players will occasionally blow off steam in unseemly ways. But Djokovic has exhibited a pattern of letting his frustration, either with his opponent or himself, overwhelm him.

Djokovic’s reign as men’s world No. 1 has been completely at odds with Federer’s, who handled himself with class and respect whenever he was on the court.

It is jarring to see Djokovic’s attitudes and missteps go relatively unpunished because of his achievements and remarkable tennis ability. It’s something that happens all too often in sports: league officials, tournament directors or other powerful people shield a star athlete from facing the consequences of their actions or attitudes, simply because they are the best at what they do.

When Djokovic inevitably passes Nadal’s record of 21 men’s singles grand slam titles, it will be an incredible achievement. I will most likely be watching, and I will appreciate that I am alive to witness such a historic moment in tennis history. But I most certainly will not be cheering him on.