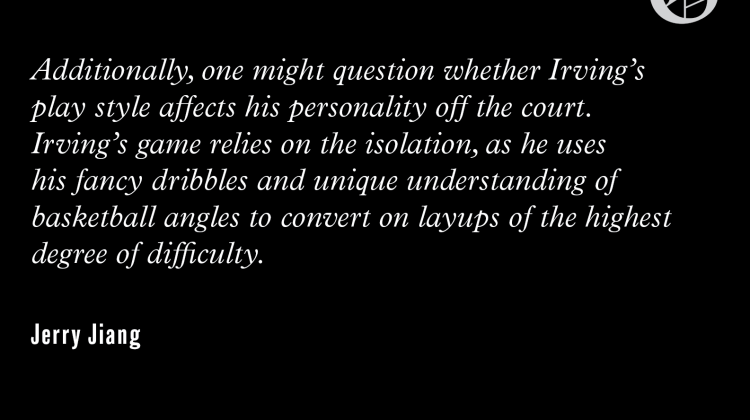 You’re in a group project for the final. Your professor has given you two of the smartest people in the class to complete the assignment. You think to yourself, “We’re going to cruise to an A.”

Then, one of your peers says, “You know what, if it’s cool with you guys, I’m actually going to do half of the work.”

At this point, you’re thinking, “That’s not fair. Now what are we supposed to do?”

With the departure of Philadelphia 76ers guard James Harden, Durant is in a situation in which he’s playing with one of the most selfish players of all-time —Brooklyn Nets guard Kyrie Irving.

Since the start of the season, Irving remained firm with his stance about being unvaccinated. With the NBA season well underway, Irving played his first game against the Indiana Pacers on Jan. 5.

Per New York’s vaccination requirement, if Irving were to come back, he would only play in road games.

Irving’s decision to remain unvaccinated results in him becoming the first part-time player since Terry Dischinger in 1969.

Now, let me be clear, this isn’t an article about Irving’s decision to stay unvaccinated.

Everyone has their own beliefs and part of being an American means you have the right to voice your opinion, regardless of how polarizing it may be.

This is an article about how Irving is one of the most selfish players in the NBA, and it will cost him another championship.

In a sport where team chemistry is critical, having Irving as a part-time player provides an unnecessary distraction and was one of the main factors driving Harden out of Brooklyn.

Since his return, the Nets went 4-10 and were in the middle of an 11-game losing streak. It was clear Irving’s distractions were a major factor with the Nets’ dysfunction.

And this wasn’t the first time.

After winning an NBA title with now-Los Angeles Lakers forward LeBron James — who remains one of the greatest players of all time — Irving decided he was tired of playing second-fiddle and requested a trade.

Irving wanted to be “the man” and felt disrespected that he couldn’t showcase his abilities on the floor as much in Cleveland.

When asked whether Irving viewed James as a “father figure,” Irving brushed off the question and said James was a great influence in being a leader. While the question may have been odd, the proof was in the pudding.

Irving did not like sharing the spotlight. Thus, he requested a trade to Boston.

For the next two seasons, the Celtics felt Irving’s disruptions as Irving continuously threw his teammates and coaches under the bus. It got so bad to the point where Irving had to call James to apologize for acting out in Cleveland.

If this doesn’t spell selfishness, then frankly I’m not sure what does.

Additionally, one might question whether Irving’s play style affects his personality off the court. Irving’s game relies on the isolation, as he uses his fancy dribbles and unique understanding of basketball angles to convert on layups of the highest degree of difficulty.

Irving needs the ball to succeed.

While these moves on the court might look nice, his selfishness has reached a boiling point in his short two years in Boston.

Now, Irving has done it again in Brooklyn.

Irving’s selfish nature has cost the Nets a chance to build team chemistry and drove Harden out of town.

If Irving doesn’t fix his act soon, he might see another generational talent leave his presence, leaving him on an island for good.