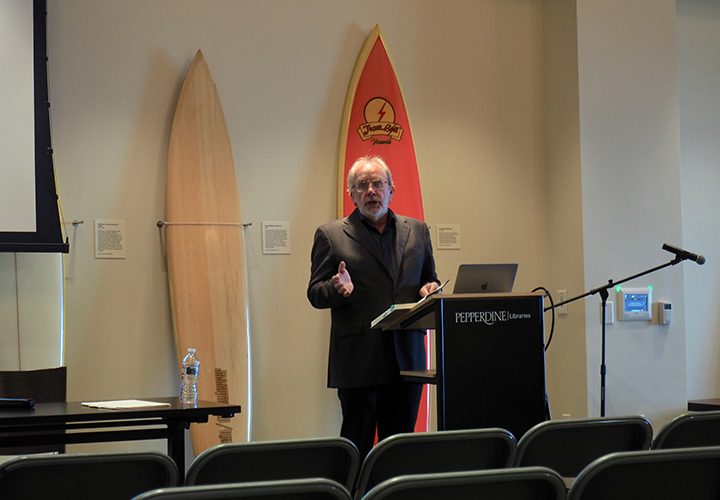 Filkins is the author of “H.G. Adler: A Life in Many Worlds,” a biography about the life and writings of Holocaust survivor H.G. Adler.

“Adler used his experience to share the stories of those who did not survive,” Filkins said. 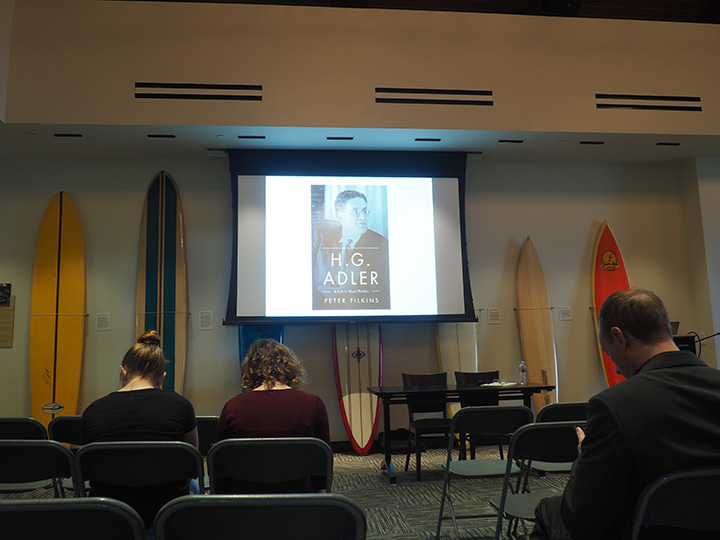 Filkin’s book “H.G. Adler: A Life in Many Worlds” is projected on the screen before the lecture begins.

After being liberated from Auschwitz in April 1945, Adler committed the next decade of his life to writing “Theresienstadt,” named after the Jewish ghetto where he lived for nearly three years before being transferred to Auschwitz.

The book is not a memoir, but rather a history of the ghetto, Filkins said.

Adler used administrative documents that he collected and saved from his wife’s prominent position in the ghetto’s infirmary to reveal the harsh realities of daily life there, including disease and death records.

Adler spent the rest of his life collecting stories from other Holocaust survivors and incorporating their narratives into his many other works, Filkins said.

Adler’s wife Gertrud was killed in a gas chamber upon arriving to Auschwitz in October of 1944, along with her mother. Upon his liberation, Adler had lost 18 family members to the Auschwitz death camp.

To Adler, writing was an act of self-liberation, Filkins said. Writing was not only liberating, but it was a way to document the history of what was being ignored by many.

“For nearly 20 years it was as if nothing had happened in Germany and Europe,” Filkins said.

It wasn’t until 1961, when a documentary of survivors was published, that the reality of the Holocaust began to be acknowledged at all, Filkins said.

Filkins was hosted by the Glazer Institute and German Prof. David Dowdey. The institute was founded in 2008 to supplement students’ learning and promote dialogue between Christians and Jews, according to Pepperdine’s website.

Glazer Scholars such as senior Luke Whartnaby, attend events like this one as a part of their studies.

“Filkin’s talk proved how there are endless amounts of stories and lives affected by the Holocaust,” Whartnaby said. “I think it is important to study the lives of Holocaust survivors because they often demonstrate how both the human spirit and human creativity can never be fully stifled by evil.”

Dowdey teaches first-year seminar “Portraits of Resisting Evil in Hitler’s Germany.” He discussed the importance of learning from the past’s mistakes.

“We are living in times when there are so many efforts from certain people to bring about division, separation and bad attitudes toward those who are different,” Dowdey said. “It is horrifying to think of what that can lead to.”

Dowdey also mentioned the necessity of remembering the Holocaust and its survivors.

“We must always look back and try to remember how dangerous it is not to be accepting and understanding of those who are different,” Dowdey said. “We dare not forget what happened.”

The Glazier Institute will be hosting L’Dough V’Dough where students can bake traditional Jewish bread with Holocaust survivors. The event will be Wednesday, Oct. 2 at noon in the Fireside Room. 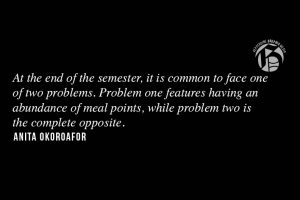 At the end of the semester, it is common to face one of two problems. Problem one features having an abundance of meal points,...
Copyright 2013 Jupiter Premium Magazine Theme
Back to top