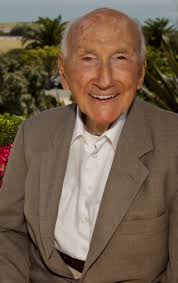 For the first time in years, November 8 passed without a massive birthday party for Herbert V. Nootbaar, who turned 108 years old. Global Justice Program Director Jim Gash said Nootbaar typically threw a themed celebration with close to 150 guests each year. Due to his deteriorating health, however, Nootbaar’s final birthday party did not take place, and he passed away one month later on Dec. 18.

Gash knew the School of Law Benefactor “quite well,” saying that he, his wife and their children met up with Nootbaar several times each year. His final visit with Nootbaar was two months ago.

“He was sharp as a tack even into his last days,” Gash said. “His body was failing, but his mind wasn’t.”

Nootbaar and his late wife, Elinor, funded the School of Law’s Herbert and Elinor Nootbaar Institute on Law, Religion, and Ethics in 2007, giving a donation of 10 million dollars, according to the Institute’s Founder and Director, Robert F. Cochran.

“I met [Nootbaar] when he was 99 years old,” Cochran said. “For him, justice was an important virtue.”

Cochran said he thinks the couple’s interest in encouraging the study between law, religion and ethics grew out of the their world travels, as Nootbaar visited over 126 countries in his lifetime.

“The Nootbaars were people who took ideas seriously,” Cochran said. “Herb also just had a terrific sense of humor. He was willing to stand up in front of a big crowd and receive acknowledgement for his gift or tell a joke or a story to a big crowd. He was quite a character.”

Aside from Nootbaar’s financial contributions, Cochran said a big part of the donor’s legacy was his love for his wife, Elinor.

“When he met young men who were recently married, or old men — I guess from his perspective everybody was a young man — he would pull us aside and advise us about the importance of loving our wives and really treating them as they should be treated,” Cochran said.

Gash, who went and visited Nootbaar right after Elinor passed away in 2011, said that Nootbaar was the “gentlest, most encouraging guy you’d want to meet.”

“When my wife was there, he would hold both of our hands and look into both of our eyes and kind of get a little misty eyed as he talked about the importance of treasuring each other,” Gash said.

Gash had returned from Uganda 12 hours before this interview, his 20th trip to Uganda with the Global Justice Program since 2010. Founded as a result of the Nootbaar Institute, the Global Justice Program works closely with judicial systems in Rwanda, Uganda, Sudan, South Korea, Thailand, Vietnam and Indonesia. The program will visit India for the first time this March.

“None of this would have been possible without the generosity of Herb Nootbaar,” Gash said.

Not only has Gash made close ties in Uganda — he was even asked to be a godfather for a justice’s son a few years ago — but so did Nootbaar. His big birthday celebrations provided a unique opportunity to bond with Ugandan justices working with the Nootbaar Institute.

One of these justices was Geoffrey W. M. Kiryabwire, or “Justice K.” He met Nootbaar at his 100th birthday celebration while Kiryabwire was in Malibu to explore how the School of Law could collaborate with the Judiciary of Uganda. Upon hearing of Nootbaar’s death, Kiryabwire wrote a tribute to the deceased benefactor.

“As a result of Herb’s support, many lives of people in conflict in Uganda, who will never know Herb, have been touched and Uganda is the better for it,” Kiryabwire wrote. “Herb knew that for him to be a complete person, he had to show humanity to others in need.”

While there was no formal celebration for Nootbaar on his 108th birthday, Gash said close to 300 people were able to share their appreciation for the benefactor at his memorial on Jan. 11.

“Herb will be remembered by lots of people who knew him,” Gash said. “We’ll remember him by his kindness, integrity and encouragement. But he will also be remembered by many many people who never knew him because of the work that his endowment allowed Pepperdine to do in the developing world, particularly in Uganda.”

The Nootbaar Institute’s Annual Conference will take place March 9-10 at the School of Law.

Clarification: An earlier version of this article used the term “developing countries.” The term has been removed for clarification.