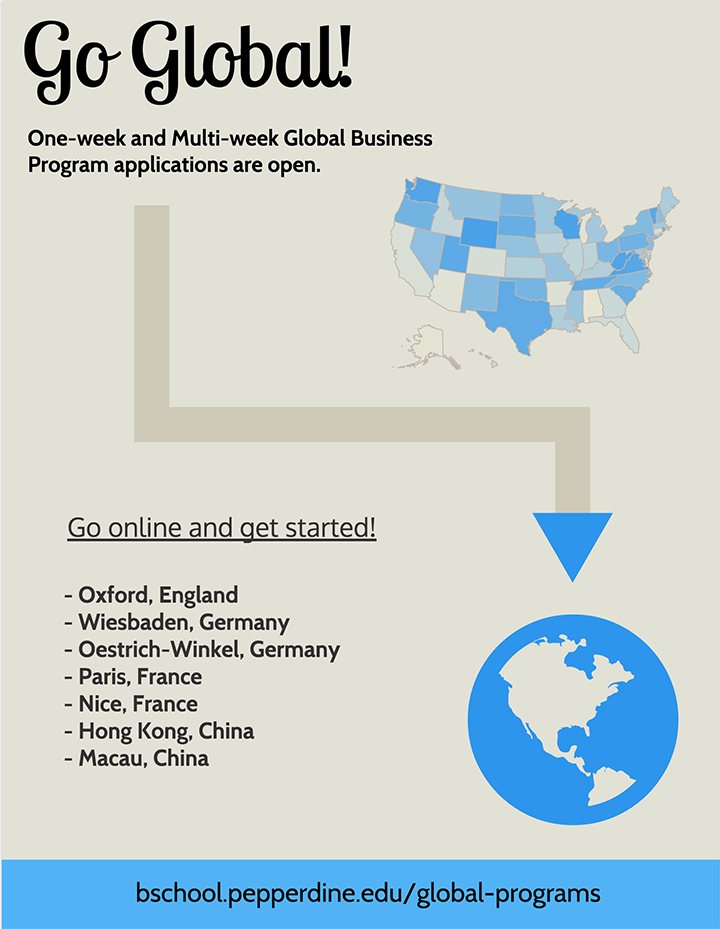 Business students are about to immerse themselves in the global economy, more than ever before.

On Monday, Pepperdine University’s Graziadio School for Business and Management opened applications for its annual Global Business summer abroad programs. These programs cover a range of different business industries in locations such as Oxford, England and Wiesbaden, Germany. New additions to the program include luxury brand management in Paris, France and digital innovation in Shenzhen and Macau, China.

Though the most popular programs are a week long, there are longer ones ranging from one semester to year-long programs. This program is part of Pepperdine’s mission to become international, according to Alisa Lopez, executive director of the school’s Global Program and full-time recruitment offices.

Pepperdine is the business school in Southern California with the widest variety of exchange partner schools, according to Seram Lee, Graziado School’s global programs coordinator. Pepperdine has 36 partner universities in over 24 foreign countries, according to Lee.

“Every partnership is accredited by an internationally recognized organization,” Lee said.

The Global Business program offers programs in seven locations, ranging from China and England to New York and Washington, D.C. Though the programs are similar to Pepperdine’s undergraduate IPs in structure and location, the classes are more focused on advancing each student’s field of work in business, Lee said.

The programs are distinct in the activities each presents, Lopez said. For example, the program in Oxford University, England has presentations from Oxford faculty and visits to local companies.

“For [international students], being in the United States is being abroad,” Lopez said.

This means that each location covers a different region and focus, giving students the option of choosing which location best suits his or her curriculum, Lopez said.

For instance, the France program focuses on luxury brand management. Students who participate in this program will be learning about the production and marketing of certain luxury products such as fashion, clothing and merchandise, Lee said.

Students participating in the France program will also be visiting the various industries all over Paris.

“We are going to visit different districts that each own a certain kind of industry,” Lee said.

Another way the programs accommodate students is through their scheduling, according to Lopez. Due to the average work schedule of a business graduate student, the programs are usually limited to being one week long, Lopez said. The majority of the students in the Graziadio School are working professionals and have only two weeks for a vacation each year, Lopez said.

Around 200 students are involved with the programs each year, and the week-long programs contain around 20 to 25 students each. According to a survey done after each program, nearly 100 percent of students were satisfied with their learning experience, Lopez said.

“I wanted to see a change in atmosphere,” Ambarthian said, “how business is run in another part of the world.”

During her time as an undergrad, Graziadio student Ann Gilbert said she did not have the time to take part in an abroad program due to her schedule, but was able to attend the one-week Oxford program earlier this year.

The biggest challenge for the program thus far has been the fluctuating exchange rates, especially in South America. These exchange rates have the added consequence of changing the costs of certain planned programs, according to Lopez.

Having studied in Heidelberg when he was an undergraduate and attended the Dublin program as part of the support staff, Lee said what makes Global Business programs and Pepperdine’s abroad programs in general so popular is their personal touch to student education.

Students are always being supported in their educational and social lives when they are abroad, whether it be through accompanying faculty or Pepperdine’s own network of connections, Lee said.

“No other university can match our personal touch and attention to global education,” he said.

Pepperdine currently has one of the highest percentages of students who participate in abroad programs and the summer programs are the graduate school’s extension of Pepperdine’s legacy as an international university, Lopez said.

Pepperdine’s graduate schools attempt to follow Seaver’s trend of successful abroad programs because it is equally important that business students are educated about the global economy, Lopez said.

“No matter what industry you end up working in, it’s going to have a global context,” he said.