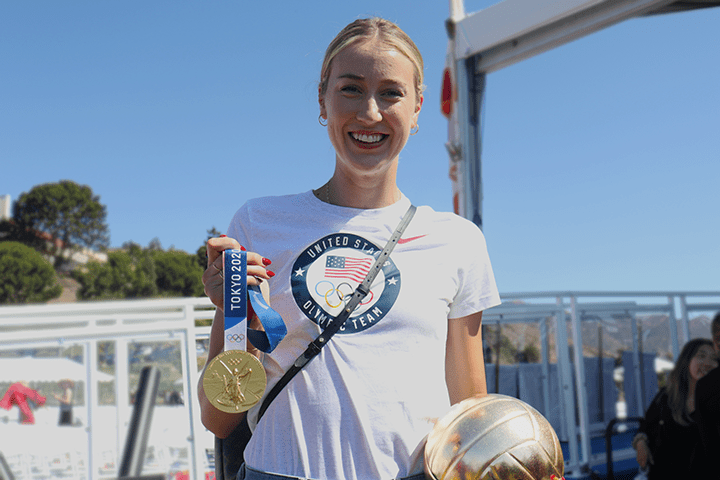 Pepperdine alumna Kimberly Hill poses with her 2020 Olympic gold medal and golden volleyball she received at the 2021 Founder’s Day from President Jim Gash. Hill was the first female recipient of an Olympic gold medal from Pepperdine. Photo by Denver Patterson

The torch is lit, the crowd is roaring, the U.S. Women’s Volleyball team is ahead and the gold medal is secured.

This was the scene for Class of 2012 Pepperdine alumna Kimberly Hill when she won an Olympic gold medal with the U.S. Women’s Volleyball team in the 2020 Tokyo Olympics, which took place in the summer of 2021 due to COVID-19. Hill is the first female gold medal recipient from Pepperdine.

“The moment we won, we were all looking to each other like ‘Oh my gosh, we actually did it,'” Hill said. “It still feels unreal to be honest.”

Hill started playing volleyball when she was 13 years old in Portland, Ore., after she played soccer and basketball before.

“One of my older sisters played volleyball, so my parents were very kindly like ‘You should give volleyball a try, you might have the body type for it,'” Hill said. “It’s gone well since.”

In 2008, Hill started playing at Pepperdine because she wanted a small Christian school with a Division I volleyball team that could contend nationally. She was also the first and only student-athlete to make the American Volleyball Coaches Association All-American first-team roster in both indoor and sand volleyball during the same season.

“Pepperdine is kind of a rare thing and so it was the perfect blend for me of both,” Hill said. “It was an easy choice for me.”

After Hill graduated, she started playing professionally. She had to play abroad because, at the time, there wasn’t a professional women’s volleyball league in the U.S.

“We have to go overseas to play professionally, so I’ve been playing in Poland, Turkey, Italy and other countries with the national team throughout the years,” Hill said.

While Hill said she learned and grew a lot from playing abroad, she also said it didn’t come without challenges, especially being so far away from home.

“We’ve had a lot of crazy experiences — like there was a language barrier and I stuck out like a sore thumb,” Hill said. “But I’ve also made some of my closest friends, and really enjoyed seeing different cultures and meeting different kinds of people. It was some of the best times of my life so far.”

Playing volleyball abroad also came with representing Pepperdine and her country on the international level, eventually representing them at the Olympic Games. Hill competed in her first Olympics in 2016 when she won bronze with the team, and most recently in the 2020 games when they won gold.

Hill said even though she was honored to play in 2016, her teammates and her were striving for gold, so they were disappointed when they came out with the bronze medal.

“We had gold on our brain and we fully believed we could,” Hill said. “Losing that semifinal match was devastating, absolutely devastating.”

But Hill said the 2020 win made up for the loss, as the U.S. Women’s Volleyball team won against Brazil, after players had an irregular year of training and the Olympic Games were postponed due to COVID-19.

“I’ll never forget the national anthem at the Olympics,” Hill said. “We’re singing and I’m tearing up, I turn and all my teammates are tearing up. It was just insanely special.”

Hill retired from volleyball following her gold medal win and said she isn’t sure what she is going to do with her time yet, but is going to spend at least a year relaxing and traveling. She said that what she took away from volleyball the most was her relationships, above even the sport itself.

“I am not going to miss the volleyball at all, to be honest, but I’m gonna miss my teammates,” Hill said. “I already have FOMO [fear of missing out], they’re like your best friends and it’s something you don’t really get in normal life — that amount of closeness and bonding that you go through with the team.”

Hill said she advises any athlete interested in playing a sport professionally to play abroad if possible, and to soak up every minute of their respective sport.

“You’ll have the rest of your life to pursue a career here at home, a more stable career, so take advantage and have fun,” Hill said. “Pursue athletics while you can, no matter how long it lasts.”