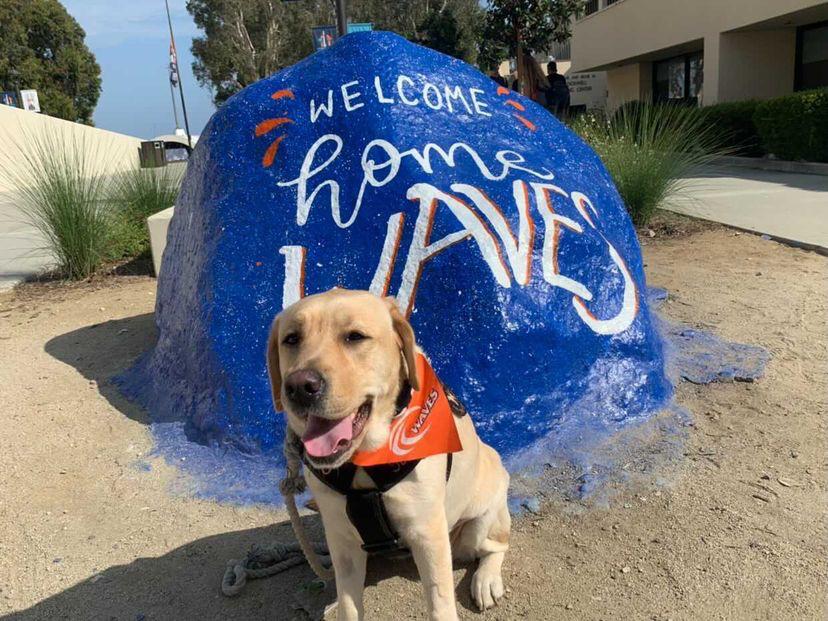 Labrador Nala strikes a pose in front of the decorated Rock in Adamson Plaza on Aug. 27. Maria Arguelles dressed Nala in a Pepperdine bandana to support the Waves. Photo courtesy of Maria Arguelles

From snout to tail, dog-lovers adore their furry best friends. Whether it be on campus or on the beach, many dogs call Malibu their home.

Most people who see these dogs just say ‘Hi’ and maybe give them a pat on the head, but rarely do they get to know the friendly canines. The dogs of Malibu and Pepperdine often bring joy and comfort to those passing by — whether it be relieving the stress of a student or bringing a smile to a professor’s face.

“I think that dogs know when things are wrong and they just want to cuddle and make you feel better,” sophomore and dog owner Gabrielle Mallozzi said, “They’re really selfless animals.”

Sophomore Maria Arguelles and her service dog Nala live on campus in the George Page apartments. Nala is a two-year-old yellow Labrador who loves exploring and playing with her ball around campus.

“She’s a really fun dog,” Arguelles said, “She loves to be around people and her favorite thing to do is just to hang out with all of my friends and chill out.”

Arguelles said Nala is also quite fashionable during holidays or cold weather. She dresses Nala up in sweaters and outfits. Followers can see some of Nala’s outfits on her Instagram @world.of.nala.

Malibu local Lindsey Greenberg is the owner of the chocolate Labrador Slim Shady, similar to rapper Eminem’s nickname. Greenberg said she named her dog in honor of her late brother.

“My brother passed away and he was a big Eminem fan, we grew up with Labs and I always knew I was gonna name him after Eminem in one way or another,” Greenberg said.

Not only is Slim Shady a pup of sentimental value, but he is also quite the celebrity. Recently, Greenberg posted a TikTok of Slim Shady meeting a sea lion on Coral Beach that received 2.2 million views. The video showed the Lab and sea lion being friendly and playing with each other.

Slim Shady has a best friend named Fin, who is a Beagle, Chihuahua and Jack Russell mix. Fin’s owner, Cassie Kelly, said she named him after the Star Wars character because she adopted him right when “The Force Awakens” came out in December 2015. Like most Malibu dogs, Fin is a big fan of the beach and spends most of his days frolicking in the sand.

The beach may be a hotspot for four-legged friends, but so is the Malibu Country Mart. Labradoodle owner, Ellie Novick said she got her dog and best friend, Doodle, three years ago.

Novick named her dog after his breed and because of how he looked, which she described as “doodley.”

People walking by Surfing Cowboys in the Country Mart will most likely see German Shepherd Reno awaiting customers at the door. 10-year-old Reno has been the store greeter since she was a pup. Donna Gunther, store owner and parent to Reno, said Reno was shy and scared of people when she first adopted her. Now, Reno loves meeting people as they enter the store.

“The best thing is seeing her start to go up to people and be friendly,” Gunther said. “She’s become so loving and social.”

Some students had to say goodbye to their four-legged friends when moving to Pepperdine. Sophomore Asha Weir said leaving her 6-month-old French Bulldog, Alfie was heartbreaking. For Weir, seeing other dogs around Malibu brings her a sense of comfort.

“They [dogs] ground us and they remind us that nothing’s that deep, they’re just happy to be alive,” Weir said.