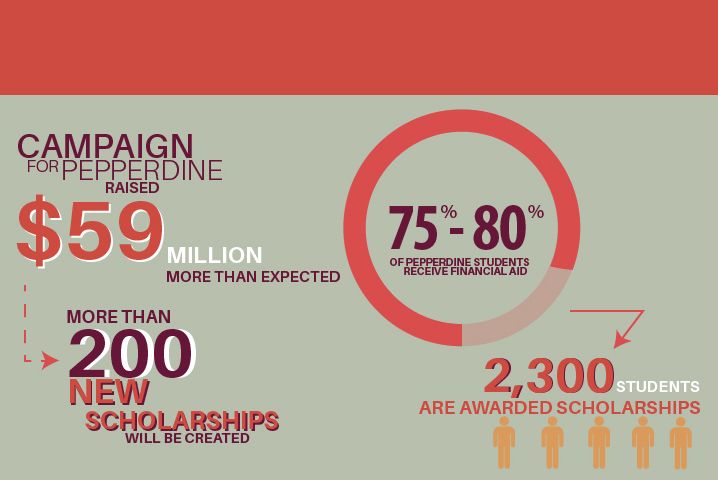 The financial aid office reports that about 75 to 80 percent of Pepperdine students receive some sort of financial assistance. According to Director of Financial Assistance Janet Lockhart, Pepperdine has approximately 2,300 students who receive Pepperdine-funded scholarships.

“For this academic year our 2,300 students qualified for scholarships and grant funds totaling over $68.9 million, for an average of $29,800 per student,” Lockhart said.

“My scholarship is motivating because it constantly reminds me to be appreciative that I have it and to make school my priority,” freshman recipient of the George Pepperdine Scholarship Cassidy Vigil said. “It’s taken a lot of the pressures of loans off, so I can study what I am passionate about, not just what will pay off my loans.”

The campaign began in August 2005, although it was not officially made public until May 2011.

At the announcement of the campaign, President Andrew K. Benton said, “We will embolden, ennoble and enable those who change for good the lives of those who matter most — our students.” The campaign theme, “Changing Lives,” explains the goal to support Pepperdine students who will change the lives of those around the world.

“Being a Regent Scholar creates a sense of community as we all live in the same dorm together. It creates a constant support system of students who feel blessed and work hard to be at Pepperdine,” freshman Kathleen Hartmann said.

According to Lockhart, “the overall scholarship support for all schools is $131 million.” This includes Seaver College, the Graduate School of Education and Psychology, George L. Graziadio School of Business and Management, the School of Law and the School of Public Policy. The financial aid office currently does not have a breakdown of the scholarship allocation of the $131 million in scholarships.

Lockhart explained there is an estimated increase in the amount of scholarships awarded per year, however, “institutional need-based grants typically increase by the annual tuition increase percentage to those students that qualify.”

Therefore, increases in amount of scholarships may not be a direct correlation to the increased funding from the Campaign for Pepperdine.

The campaign raised $59 million more than the original goal of $82 million for student support. The culmination of the Campaign for Pepperdine was celebrated at the sold-out Pepperdine Associates Dinner on Jan. 24, 2015.

“What made this Campaign particularly extraordinary is that it occurred during difficult national economic times, and during a corresponding downward trend in philanthropic support,” Andrew K. Benton said at the 2015 Pepperdine Associates Dinner. “Despite those challenges, dedicated alumni and friends generously donated millions of dollars to Pepperdine, allowing the university to realize its vision, dreams and goals of meeting the needs of its students.” 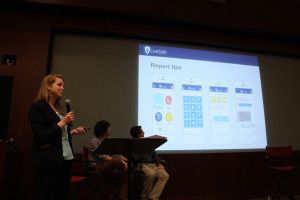 Photo and infographic by Alexander HayesSafety on and off campus is now at your fingertips. Pepperdine launched the LiveSafe...
Copyright 2013 Jupiter Premium Magazine Theme
Back to top