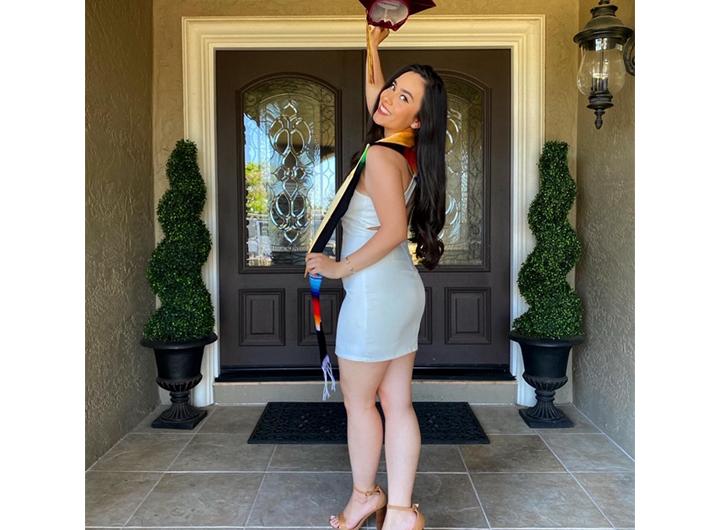 Go-getter Sierra Marquez celebrates graduating Magna Laude from De Anza Community College in June. She said she worked hard to get into Pepperdine and is majoring in Sociology.

When junior transfer Sierra Marquez did not receive her acceptance from Pepperdine as a senior in high school, she said she was heartbroken. However, she still was determined to attend her dream school and decided to go to community college in hopes of later transferring to Pepperdine.

“When I toured as an incoming senior, I knew right away,” Marquez said. “I was like, ‘This is my school.’ I felt right at home.”

Marquez, who is from San Jose, California, attended De Anza Community College and graduated Magna Laude with an associate’s degree in June.

As a Sociology major on the pre-mad track, Marquez said her dream job is to become a physician’s assistant. Originally, she was interested in becoming a nurse and then later changed her mind to pursue becoming a doctor.

“I’ve always wanted to be in the medical field, but I never knew about the PA,” Marquez said. “You’re kind of in between a doctor and a nurse.”

Marquez said Pepperdine stood out to her because of the mix of strong academics and the Christian community. She went to public school her whole life and always wanted to attend a Christian university.

“I just fell in love [with] the location and how you could go to chapel and that was required, and I loved that,” Marquez said.

After graduating Pepperdine, Marquez said her plan is to attend graduate school to complete a physician’s assistant degree. Since she lives 20 minutes away from Stanford University, her goal is to attend its Master of Science in Physician Assistant Studies program or UC Davis‘ program.

While at Pepperdine, Marquez said she would like to join a sorority and is planning to participate in Spring Recruitment because she did not get the chance to participate this fall. She is currently a member of the First Generation Club and the Latino Student Association.

Marquez said she was apprehensive about joining the LSA at first but changed her mind because of the opportunities she hopes it will provide.

“I was kind of iffy about it,” Marquez said. “I’m Mexican, but I don’t speak Spanish, and so I went in, and you know, it’s pretty cool. It’s something different.”

Marquez said when she found out Pepperdine’s classes would be held online, she was unsure of how an online format would work. Now, she thinks that online school at Pepperdine isn’t bad when compared to large, public universities.

“The one thing I really liked about Pepperdine was the small classes, so I think having that online is way better,” Marquez said. “I couldn’t imagine being in a class with 300 students and I’m online. You’re kind of just a number.”

Marquez said she appreciates that her professors at Pepperdine know her name and are constantly asking her questions in class.

“Every time I actually go down for the summer, I love the environment and the campus is so pretty,” Marquez said. “I’m looking forward to being on campus and seeing everyone every day and going to chapel.”