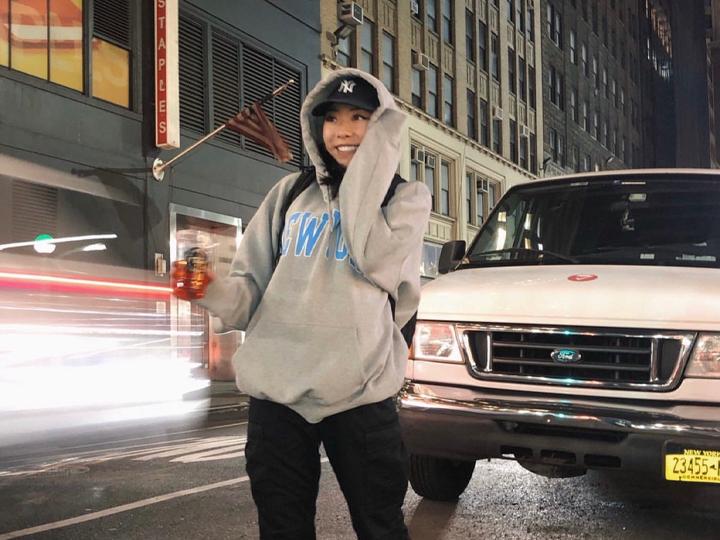 First-year Megan Elias poses in the middle of the street in Midtown Manhattan, N.Y., in February 2020. Elias said she loved growing up in New York, but is excited to live in Malibu whenever housing reopens.

When first-year Megan Elias boarded a plane from Long Island, N.Y., to O’ahu, Hawai’i, in summer 2019 to participate in a service trip for 10 days in Waimea Valley, Hawai’i, she had no idea that it would lead her to Pepperdine.

Growing up in a Christian church, Elias said she developed her love for people and heart for service by seeing the way God loves her. Her desire to help others is what fueled her decision to sign up for the service trip through Hope worldwide Volunteer Corps.

On her trip, she said she mentored children at Waimanalo Transitional Shelter, fed people without homes, helped preserve land and assisted older people in a nursing home. Elias said she created amazing friendships with people who loved God and serving others.

“I just remember crying and it felt like a break up, leaving them after the 10 days,” she said. “I made these lifelong friendships and leaving them just made me realize ‘I’m glad it hurts.’”

Not only did Elias make incredible friendships on her service trip, but she said it was the reason she chose to apply to Pepperdine.

Before going on the trip, Elias said she wasn’t planning on going to college, but that changed when she met one of the leaders on her trip, Pepperdine junior Daniel Lopez. She said he spoke to her about his experience and it sparked her interest in the University.

“He was talking about Pepperdine in a way that I had never [heard] anyone talk about college,” Elias said. “I went home, told my mom about it, and I remember her sitting in front of the computer just telling me ‘You need to go here, I feel like God is calling you here.’”

Last semester, Elias became a part of Alpha Omega Campus Ministry, a student-led ministry on campus. Elias said joining Alpha Omega transformed her relationship with God and taught her how to step outside her comfort zone.

“AO is my family and something so priceless that I wouldn’t trade,” Elias said. “I’m so humbled and grateful to be with a group of people who love God and people.”

Although she has not declared a major, Elias said she hopes to work with people and help them in any way she can. She said she is excited for what the future has in store for her despite not knowing what specific career path she wants to follow.