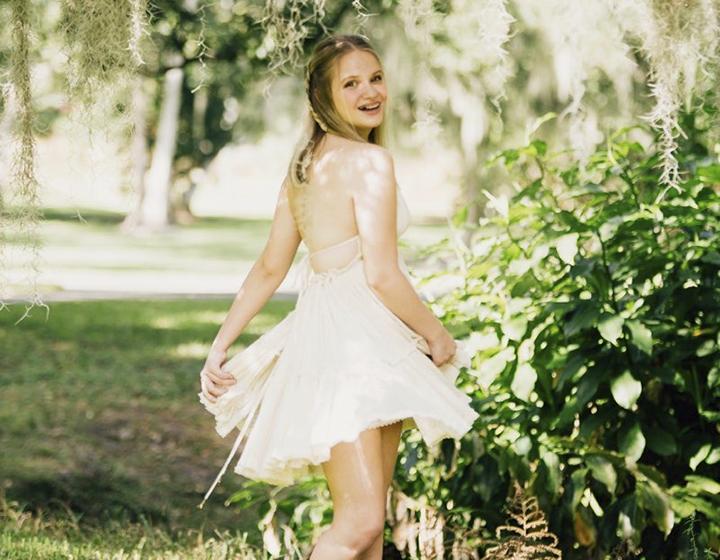 First-Year Jess Kovie smiles as she plays in the summer sun at Leu Gardens in Orlando, Fla., in November 2019. Kovie said she has always wanted to live in Malibu and is ecstatic about her new adventure.

First-year Jess Kovie, a double major in English and Political Science, said she is busy working toward a career with government officials, watching “Harry Potter” with her roommates and making what she considers the best chai latte in the world. Now she is bringing these passions and hobbies to the Pepperdine community.

Kovie, who is from Orlando, Fla., said she is already enjoying living in Malibu. She is looking forward to becoming even more immersed at Pepperdine during the spring semester, and she plans to make waves on campus with the friendships she has already built.

“My favorite part about Pepperdine is the community I’ve already formed here and all my awesome new friends I have made,” Kovie said. “They make online school worth it.”

Kovie recently accepted a bid from Pepperdine’s chapter of Tri Delta. She said the number of activities they have done in such a short time has been a pleasant surprise.

“We have all sorts of fun events at least once or twice a week when we all get together over Zoom; it is a great way to make friends,” Kovie said.

Kovie said she has enjoyed getting to know her two new roommates. They live off campus together and are all first-years.

“We’re watching all the ‘Harry Potter’ movies right now, and that’s been a really fun way to bond together,” Kovie said. “We all get our popcorn and snuggle on the couch.”

Greek life and new roomies are not the only new activities in Kovie’s Pepperdine experience. Kovie said she recently turned in her application for Pepperdine’s D.C. + Florence International Program. She was drawn to this program because D.C. will help her Political Science major, and she is already taking Italian.

“I think it would be good to be right where everything in the government is happening,” Kovie said.

She dreams of working for the government in Washington, D.C., one day, and she said this is her first step to achieving that goal.

“Eventually I would love to be a speechwriter,” Kovie said. “I’d like to work with a congressman or woman, ideally writing speeches and perhaps doing social media campaigns.”

Kovie plans to get involved with Pepperdine’s Student Government Association, and she said she aspires to get plugged in wherever she can plan and lead. She hopes to one day run for senator.

Kovie said she loves to spend her time writing original poetry, art journaling, painting and making memories with her friends.

“I’m a total mom, and I love cooking for my friends and being there for them,” Kovie said. “I’m pretty fun, too.”

Kovie said she has been enjoying her time with the new family she has formed in California. She hopes to be with everyone come spring and receive the traditional college experience.

“I’m just hoping to be able to live on campus because it is just so beautiful,” Kovie said.