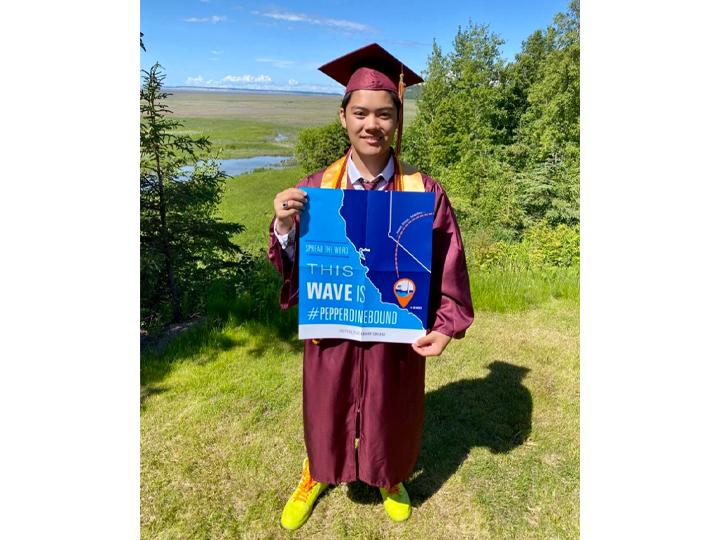 First-year Andrew Crandall smiles with his Pepperdine admission letter in May in his hometown of Anchorage, Alaska. Crandall said he looks forward to being on campus because Malibu is somewhere he dreamed of living.

First-year Andrew Crandall hopes to see himself in Nike‘s future. Crandall, who is a History major from Anchorage, Alaska, said his goal is to be a corporate lawyer for Nike.

Crandall is a first-generation child of immigrants, whose parents emigrated from South Vietnam to Alaska, where Andrew grew up as the oldest of his three siblings.

“It is sometimes tough to find an identity as a first-generation child of immigrants in America,” Crandall said. “But, sports and academics was always a place I could have a fair chance to compete and succeed.”

Crandall said he is passionate about anything basketball-related. The basketball player Michael Jordan was Crandall’s idol growing up, he said.

“I am a big basketball person,” Crandall said. “I simply love playing basketball and watching the game.”

Crandall plans on applying to law school after graduation in the hopes of becoming a corporate lawyer for Nike, the sponsor of Jordan. Crandall said he is a big fan of the culture and history of Nike.

“When I was growing up, my family didn’t have a lot of money, but my dad always made it a priority to give me a pair of Jordan sneakers once a year when we could afford to,” Crandall said. “It was a really special thing to me.”

The moment Andrew knew he wanted to be a corporate lawyer for Nike was during his visit to Nike’s headquarters in Beaverton, Ore., where he read the book “Shoe Dog” written by Nike’s founder, Phil Knight. Crandall said there was a particular chapter in which Knight was in a very dire court battle for the sake of Nike’s future — the performance of Nike’s legal team aided them in their victory in court.

“It was at that moment that I knew how important a legal team was,” Crandall said. “I would be honored to represent them.”

Crandall wants to be the best student he can be so he can work for his dream company. He said Nike’s slogan — “Just Do it” — always inspires him, whether it’s studying for an upcoming final or pushing himself hard in sports.

Next semester, Crandall will be living in the Gaming and Esports interest community. He said he looks forward to having face-to-face interactions with people and seeing the Pepperdine sunsets and ocean view himself.

“Some of my high school friends said my resting face looks like I am mad, but I am very nice and open and love talking with people,” Crandall said. “So if anyone ever sees me on campus, just come up and say hi.”