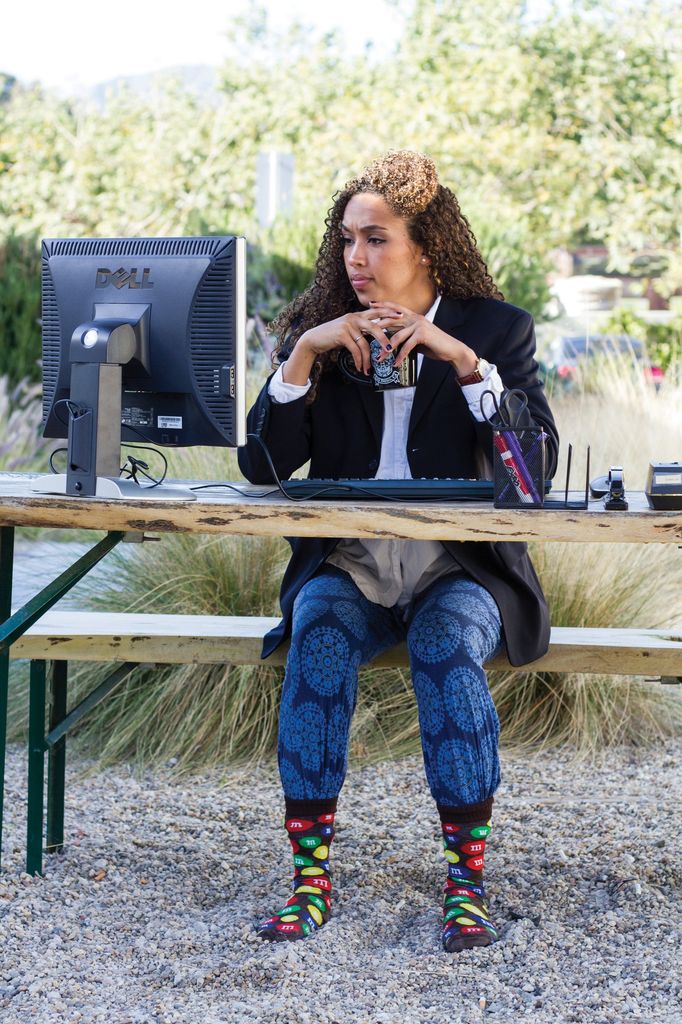 There is something completely unpoetic about typing on a kitchen counter that has dried chocolate ice cream stuck to it. I don’t know which roommate did it. It might have been me. Regardless, I can’t edit my LinkedIn profile and talk about my organizational skills in an apartment that resembles the college edition of “Planet of the Apes.” So like every other nomadic worker, I turn to the nearest coffee shop.

Unsurprisingly, a good half of these Starbucks and Coffee Bean patrons are fellow college students pulling their hair out over piles of notecards. What is unexpected, perhaps, is that these not-so-hallowed grounds of coffee shop franchises may be right where I end up again after graduating. I may be perpetually chained to these coveted outlets.

In some industries — especially publishing, where digital is rapidly replacing print — the traditional concept of a 9-to-5 job is becoming obsolete. Through resources like email, Skype, WordPress, Google Docs and other means of computerized sorcery, working remotely is becoming a more practical concept with each passing day. Instead of having a big meeting with the boss upstairs, everyone can just use Google Hangout. You may never even meet your boss face to face. For all you know, he or she could be training elephants in Cambodia.

Freelancer and alumna (‘12) Sonya Singh, for example, said she has spoken to her editor at Los Angeles Magazine on the phone maybe once.

“You have to wear so many hats as a freelancer,” Singh said, who writes predominantly for LA Mag and occasionally for NME, Nylon and a few other digital outlets. “You have to be your own business manager. You do your own invoicing and billing, and you have to chase down people if they don’t pay you, which definitely is a real thing. Like, ‘We sent a carrier pigeon out three weeks ago, have you not got that check yet?’”

Once an executive editor at Pepperdine Graphic Media, Singh is now a multimedia journalist who specializes in music. Her freelance work includes interviewing artists, writing in-depth profiles, covering live shows and taking photos when possible. In short, she is that super cool person at the concert with a foot-long camera lens and a coveted backstage pass. However, Singh said she didn’t necessarily plan on freelancing as an undergrad.

“[It] was kind of an accident that I stumbled into and ended up really enjoying,” Singh said.

For Singh, choosing her own subject matter and making her own schedule are the two best things about being a freelancer.

Fresh out of Pepperdine, Singh jumped straight into full time freelancing, though she soon realized she needed a bit more stability.

During the day, Singh works as the Assistant Director of Student Publications for Cal Baptist University. But at night, she’s writing her next story — like Clark Kent in reverse — interviewing Jenny Lewis or photographing Florence + The Machine at the Hollywood Bowl.

“I’m not necessarily a desk-job person, who likes the 9-to-5 and can go home and forget about it,” Singh said. “I love the adventure of freelancing. I love getting to choose what I write about and expose people to something new. I can make it into a reality, which is neat.”

Singh said she admires people who rely on the next big story for their primary income, admitting that there is “a low hum of anxiety in the mind of every freelancer.”

Photographer, alumna (‘15) and former Currents photo editor Jill Amos, who is now a full-time freelancer, is probably humming right along with Singh. Amos interned at Seventeen Magazine the summer before her senior year of college where she worked for a few months after graduation. A quick glance at Amos’ Instagram (@thefamousamos) shows her recent adventures in Olympic National Park, Palm Springs, Los Angeles, Malibu and her current home base of Brooklyn. However, Amos said she also never expected to be freelancing after graduation.

“It’s a weird workplace out there, that’s for sure,” Amos said. “Especially for publishing. I wanted a full-time job where I could climb my way up and all of that. But it just turned out to be different than I expected. I think freelancing is a good thing to do. It’s like taking different classes in college.”

Up until two weeks before graduation, Amos said she didn’t have a job.

“[Publishing] was a very hard work field to get into,” Amos said. “I got a call that an assistant [at Hearst Corp.] in the job I interned in had left, and they were looking for someone they had used ASAP. It was all about timing and luck.”

That job lasted until July, at which point Amos was hired for a new position in a different department. Her third job at Hearst Corp. lasted until this past January.

“They can’t really promise you a full-time job,” Amos said. “And it’s not up to them. It’s not like they wanted to terminate my position, but they can only have a freelancer on board for a certain amount of time until they are required to provide benefits. And they’re all really great experiences, so it’s pretty scary when you know your days are limited and you have to find out what you’ll be doing next for income.”

These days, Amos keeps busy by assisting a photographer and doing office administrative work, as well as tackling a few marketing jobs on the side. In the midst of her travels and self-ruled schedule, Amos maintains the dream of becoming a creative director of a magazine and ultimately owning her own social media marketing agency. Meanwhile, she said she keeps in touch with everyone at Hearst.

“It’s all kind of about being really, really independent and proactive, and making up your own job, really,” Amos said. “It’s very strange right now, as publishing is getting smaller. It’s scary, but it’s worth it to get into if it’s what you’re passionate about.”

Amos said that once you start freelancing, it can be a tricky field to stop.

“People see you are fresh out of school and you don’t need that full-time job,” she said. “But if you freelance a lot, you learn what you like. And maybe you can get a job that’s a whole better fit and you know what you’re passionate about. You just need to make decisions about which jobs will provide you with connections in the future.”

The lack of commitment that freelancing provides can be a refreshing concept for college grads, especially those who, despite being forced to choose a major, are still unsure about what they want to do. The job-roulette trend seems to be ingrained in our generation, as 25 percent of Millennials say they intend to stay at their current job for a year or less, according to Modern Survey. On the other hand, only 13 percent of baby boomers and GenX employees say the same.

Robin Benway, author of the best-selling “Emmy & Oliver” published in 2015 by HarperTeen, said she loves the flexibility of working remotely.

“I literally make breakfast in bed every morning,” Benway said. “I get a lot more done because I’m not really distracted throughout the day.”

With no need to go to an office, however, Benway said working from home causes her to get a little “squirrely” sometimes.

“You really do have to make an effort to meet people, make plans and leave your house,” Benway said. “When your workplace is also your home place, you have to make sure that you have some boundaries and lines drawn. Otherwise, you’re just working all the time.”

Maybe that’s why coffee shops are particularly crowded with laptops these days, as many students are able to transition from college to the workforce without a change in scenery, trading the romanticized ideal of an office with this newfound concept of daily breakfast in bed.

While some are on track to get a mahogany desk with a nameplate and a 401(k), the rest of us may be afraid of jumping straight into the first waters our toes touch after graduating. Despite the inconsistency or stress of a self-dictating occupation, maybe freelancing is that chance to test out all our options — like if Malibu Yogurt gave an unlimited amount of froyo samples.

And maybe, if Starbucks was smart, they’d start charging rental space for those tables.